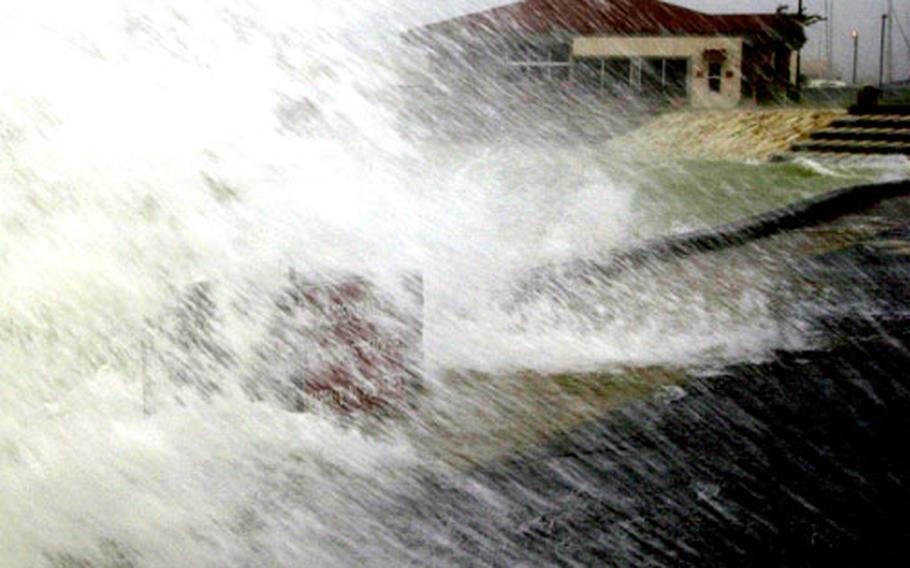 Ocean water crashes over the seawall at the Kadena Marina, as Typhoon Saomai stirs things up on Okinawa on Sept. 13, 2000. (Carlos Bongioanni / S&S)

CAMP FOSTER, Okinawa &#8212; With typhoon season about to begin, military and Japanese weather officials say now is the time to prepare against hardship and chances of injury.

The 2005 typhoon season starts Wednesday and ends Nov. 30. In an average year, four typhoons threaten the Japanese mainland and seven threaten Okinawa, according to the Japan Meteorological Society.

Fifteen of the western Pacific Ocean&#8217;s 32 typhoons came within 186 miles of Okinawa last year, the most since 1957, according to the Okinawa Meteorological Observatory.

&#8220;That was a little bit more abnormal last year, but overall in the western Pacific it was a pretty average year,&#8221; said Lt. Cmdr. Rick Mohammed, operations officer at the Joint Typhoon Warning Center at Pearl Harbor, Hawaii. &#8220;They&#8217;re all pretty much average in the last five years.&#8221;

Last year, 12 storms came close enough to Okinawa to elevate the Tropical Cyclone Condition of Readiness, or TCCOR, according to the Kadena Weather Flight.

There are a number of things residents can do to prepare for a typhoon, from stocking up on essentials like batteries and water to clearing their yards of flying hazards like lawn chairs and coconuts, according to Tom Morello, training and operations officer for Okinawa&#8217;s Marine bases.

The bottom line, said Morello, who has lived on Okinawa for nine years, is don&#8217;t take unnecessary risks. Stay indoors, use good sense, and, when a typhoon strikes, you&#8217;ll probably be fine.

There are several things people can do to prepare for typhoons:

Determine your power needs. Although electricity is usually restored fairly quickly, prepare for a couple days without power, said Tom Morello, training and operations officer for Okinawa&#8217;s Marine bases. Keep a supply of flashlights and fresh batteries, and use candles only in ventilated areas away from flammable material.

Stock up on essentials. Waiting until a storm is about to hit means you&#8217;ll be competing with others for high-demand supplies, Morello said. The rule of thumb is to buy one gallon of water per person, per day. Fill bathtubs and buckets with water for washing and flushing the toilet in the event of a water line break. Buy canned and other non-perishable goods, and consume any perishable items in the days leading up to the storm. Before the storm strikes, take stock of any baby and pet food needs, and fill necessary prescriptions.

Secure your property. Anything lying on your lawn can be turned into a high-speed projectile. Potted plants and trashcans should be moved. Buy bungee cords to secure items. Remove anything high winds could shear from a tree. To secure your home&#8217;s interior, use duct tape on door edges as a stopgap measure in flood-prone areas.

Determine your home&#8217;s safety. &#8220;Construction on [Okinawa] is made for typhoons,&#8221; Morello said. &#8220;You don&#8217;t see any buildings blown down here unless it&#8217;s one of the shacks.&#8221; Concrete base housing on mainland Japan also is relatively safe in a typhoon, and many off-base homes are built to withstand strong typhoons, earthquakes and other disasters. But if your home is made of thin materials such as plywood, consider staying somewhere else during the storm.

Stay in contact. Keep a list of important phones numbers on paper, not a computer. Also, consider buying a car-operated battery recharger for your cell phone. Have a battery-operated radio on hand to listen to weather updates. If an Internet connection is available, the Futenma weather Web site or the Kadena Weather Flight will have updates on Okinawa. On mainland Japan, check your local base Web site, or the Joint Typhoon Weather Center.