Premeditation at heart of closing remarks in Hasan case 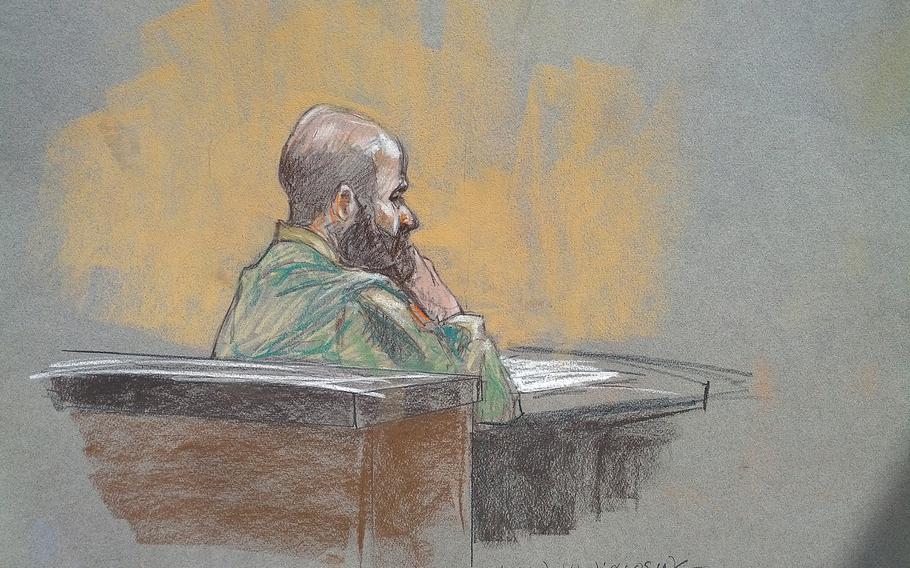 In this courtroom sketch, Army Maj. Nidal Hasan listens to court proceedings before electing to not make a closing argument in his murder trial at Fort Hood, Texas, on Aug. 22, 2013. (Jennifer Hlad/Stars and Stripes photo of sketch by Brigitte Woosley)

FORT HOOD, Texas — In the prosecution’s closing statement, Col. Steve Henricks on Thursday asked the panel of military officers in charge of deciding Maj. Nidal Malik Hasan’s fate to return a unanimous verdict — leaving unspoken that the government will seek the death penalty if they do.

Hasan elected to not to give any closing statement.

There is no doubt, Henricks said, that Hasan killed 13 people, injured 31 others and shot at police officer Sgt. Mark Todd on Nov. 5, 2009. But what the case boils down to, he said, is premeditation. Hasan on Wednesday chose to call no witnesses and declined to testify on his own behalf.

Osborn also told the panel of 13 military officers acting as a jury that they should disregard the fact that Hasan, who is acting as his own attorney, did not testify.

Late Wednesday, during a discussion about which charges the judge would instruct the jury to consider, Hasan said the shooting did not involve “heat-of-the-moment passion,” but did include “adequate provocation.”

“These were deploying soldiers that were going to engage in an illegal war,” Hasan said.

Henricks stressed evidence that indicated Hasan had planned the attack. For instance, Henricks said, Hasan used paper towels to pad the 16 loaded ammunition magazines in his cargo pockets, “so they not click when they bang together.”

“Some things don’t happen without premeditation,” Henricks said, noting that Hasan had seen a white board indicating that the unit he was scheduled to deploy with would be in the busy clinic the day of the shooting.

The prosecution had not completed its closing statement by press time.