Precision required of those going for coveted expert medical badge 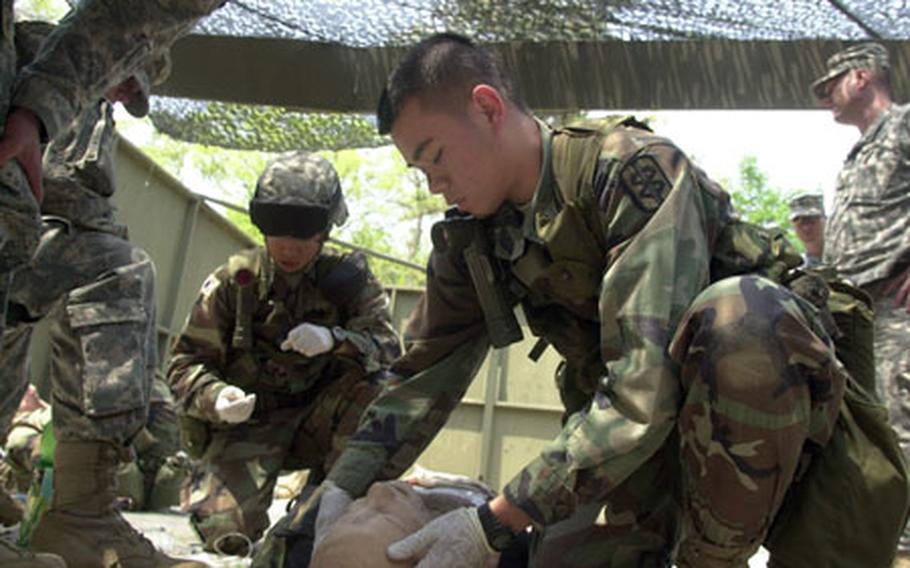 Sgt. Rizmel Paguio of the 16th Medical Logistics Battalion checks for head injuries after inserting a chest catheter earlier on a mannequin at Warrior Base Monday. Paguio is among 284 soldiers who will compete for the Expert Field Medical Badge later this week. (Erik Slavin / S&S) 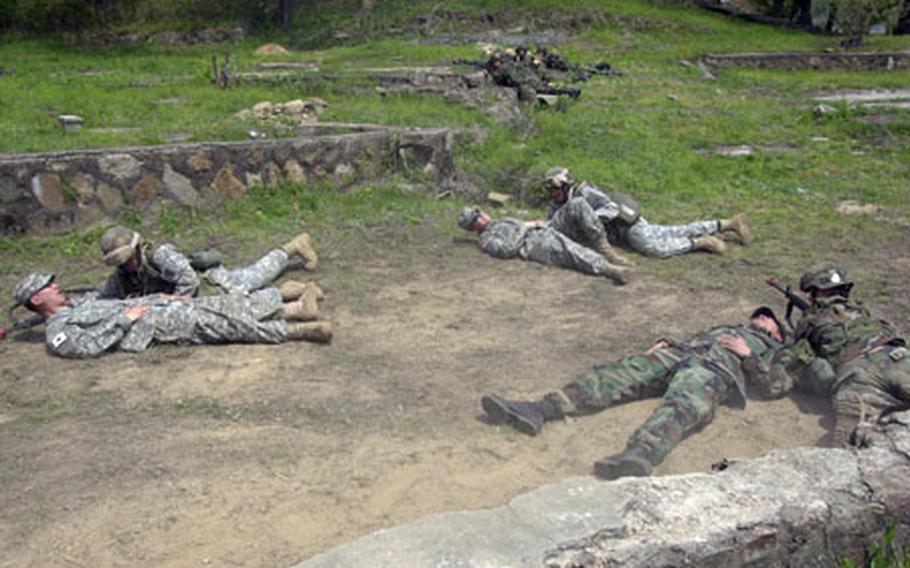 Soldiers low crawl toward injured victims during practice runs for the Expert Field Medical Badge at Warrior Base on Monday. (Erik Slavin / S&S) Instead, he met his match at the hands of the phonetic alphabet while calling for a helicopter medical evacuation.

“I said ‘three’ instead of ‘tree,’ Baker said. “That’s what knocked me out last year.”

A mistake that small automatically knocks soldiers out of the running for the badge, an honor earned by fewer than 10 percent of entrants last year.

Baker is back this year as one of 284 soldiers competing on a course very different from years past.

Candidates are expected to come to the competition trained by their units.

Evaluators showed candidates how they’ll be graded and provided some instruction during five days of orientation that was to conclude Tuesday. But the soldiers don’t know the full extent of what lies ahead.

They weren’t allowed to run the full course at combat speed like they will during the test, which starts Wednesday and ends with a 12-mile rucksack march Monday.

Candidates used to finish a “training lane” and then walk to several more. This year, the lanes are composed of three fluid scenarios, with new elements thrown in from lessons learned in Iraq and Afghanistan.

The first scenario takes the candidates through urban warfare, where they must treat soldiers mocked up with massive trauma. The second places them in the woods and includes varied attacks by opposing forces.

Candidates will face roadside bombs, simulated artillery fire and a host of changing circumstances on the third lane. They must be prepared to take wounded soldiers to a fixed base — or to a tracked vehicle, or carry them to a helicopter after calling them to a landing zone.

“I think anybody who has actually been in combat would say this has more realism,” said Sgt. 1st Class Kenneth Graham, a lane noncommissioned officer in charge with the 560th Medical Company.

If history is any indicator, half the candidates won’t even make it to the scenarios. The written test covers very detailed material from four different technical manuals.

The candidates also must complete day and night land navigation with a compass and a map. It’s no gimme’ for the many candidates who spend most of their days in hospitals and clinics.

Despite those challenges, many candidates say the toughest part is rethinking years of practice.

“We’ve got our own little habits of how we assess a patient,” said Staff Sgt. Deanna Carson of the 2nd Infantry Division’s Special Troops Battalion. “Here at EFMB we have to do it to their standard.”