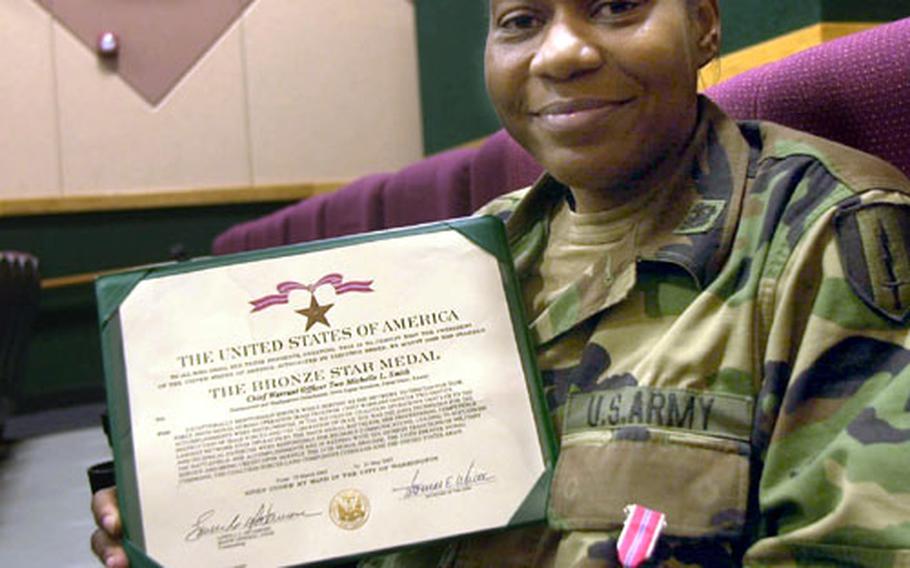 YONGSAN GARRISON, South Korea &#8212; Chief Warrant Officer Michelle R. Smith is much more excited about her next official Army photograph than most soldiers would be.

That&#8217;s because she&#8217;ll be sporting a Bronze Star, presented to her Friday during the 41st Signal Battalion&#8217;s monthly awards ceremony. Earlier this year, Smith spent about five months at Camp Udairi in Kuwait, a remote desert post, gearing up for Operation Iraqi Freedom.

The humble, always-smiling Smith was cited for her work in creating a communications network for five camps throughout Kuwait. It was a massive task, taking existing Kuwaiti infrastructure &#8212; that could support only about a dozen phone lines &#8212; and fostering it into a massive, burgeoning network among all services so the military could talk.

It meant a lot of bumbling around in the roadless desert at night, enduring sandstorms and occasional platoons of armored vehicles that would cut their fiber lines with their heavy tracks, Smith said.

Her technical knowledge of communication networks is impressive, and Smith can comfortably discuss industry specifics such as telephone pedestals, tactical networks, packets.

The 38-year-old would be highly employable in the private sector. But she&#8217;s a 17-year Army veteran and says the allure of high-paying commercial jobs can&#8217;t replace the satisfaction of helping other soldiers.

Smith is no stranger to personal challenges, either, having grown up in East St. Louis. She&#8217;s also a single mother, with five children, including two sons who are currently serving in Iraq and another in Germany.

In fact, Spc. Deon Myers, with the 44th Signal Battalion, didn&#8217;t get deployed to Iraq, but his truck did. And his mother wound up riding in it while in Kuwait, with her son&#8217;s name in block letters on the windshield.

Smith signed on for two years in South Korea. Soon, she expects to retire and spend quality time with her spread-out family.

She hasn&#8217;t had much contact with Steven, 21, and Michael, 19, during their time in Iraq, but she has been sending care packages. Smith didn&#8217;t plan to give a speech after receiving her medal, but she did offer soldiers some advice: You can overcome adversity, however difficult.