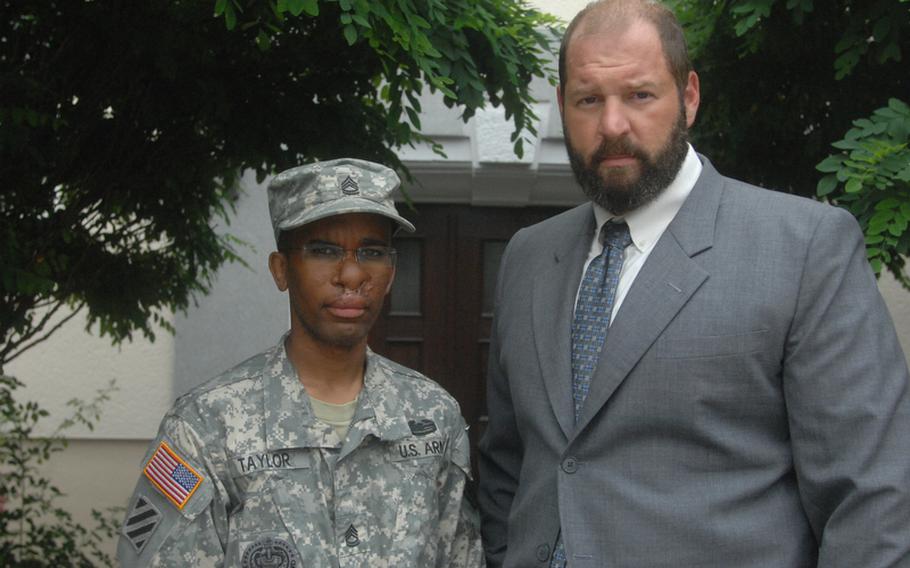 BAMBERG, Germany &mdash; Before they use lethal force in combat, troops in Afghanistan are required to positively identify that a target has hostile intent.

Questioning on the second day of an Article 32 hearing for Sgt. 1st Class Walter Taylor focused on whether he established hostile intent before shooting an Afghan civilian who drove into a firefight with insurgents.

Taylor, a route clearance platoon sergeant, is charged with negligent homicide and dereliction of duty.

Army prosecutors argue that Taylor failed to positively identify hostile intent when he shot Dr. Aqilah Hikmat, a civilian who stepped out of a car that had arrived moments after the platoon hit a hidden bomb, and as insurgents attacked with small-arms fire, according to an Army investigation.

Taylor&rsquo;s lawyer says his client was relying on experience when he judged Hikmat to be dangerous &mdash; her car happened to stop over a command wire, similar to other command wires the platoon had found connected to roadside bombs in previous missions, according to testimony.

Taylor&rsquo;s platoon leader testified Wednesday that the rules of engagement under which the platoon trained while downrange require a &ldquo;reasonable certainty&rdquo; of a target&rsquo;s hostile intent. Second Lt. Jeremiah Paterson agreed he would use lethal force if &ldquo;51 percent&rdquo; sure of the target&rsquo;s hostile intent, or &ldquo;pretty sure.&rdquo;

On Thursday, Taylor&rsquo;s lawyer continued to press the issue, asking Sgt. Richard C. McKelvey, a soldier in Taylor&rsquo;s unit, how he&rsquo;d respond to an unarmed person running toward him and not stopping.

McKelvey said he would try to verify the person was a suicide bomber.

&ldquo;How do you know for a fact that they are a suicide bomber?&rdquo; defense attorney James Culp asked.

Taylor, 31, was on a patrol in Wardak province with his 38th Route Clearance Platoon on July 21, 2011, when the unit&rsquo;s Buffalo mine clearance vehicle hit a hidden bomb. Dismounts then took small-arms fire, according to the 15-6 investigation, the administrative precursor to the criminal case.

Hikmat&rsquo;s family inadvertently drove into the area. Someone in the platoon called over the radio that the car was hostile, and the unit opened fire, killing Hikmat&rsquo;s 18-year-old son and 16-year-old niece and injuring her husband, according to the 15-6.

Minutes later, Hikmat emerged. Taylor shot her within seconds, according to the investigation and the testimony of soldiers present.

McKelvey, called as a witness by Army counsel, testified that he heard Taylor tell Hikmat&rsquo;s injured husband &ldquo;That&rsquo;s what you get&rdquo; as he approached the car after the shooting. Yet he struggled to explain if Taylor had yelled the comment, as he told a criminal investigator in the case, or said it so only McKelvey heard it as he testified Thursday.

No other soldiers reported hearing the comment, Culp told McKelvey. The attorney suggested McKelvey invented it to spite Taylor for his continuous refusal to send McKelvey before a promotion board. McKelvey denied the accusation.

Special Agent Perry Doegha of the Bamberg Criminal Investigation Command testified that Taylor told him in an initial statement on the shooting that he was &ldquo;out to get somebody&rdquo; after the explosion, even if that person wasn&rsquo;t related to the incident.

Culp noted that Doegha didn&rsquo;t record the interrogation and asked if the investigator invented the quote, which Doegha repeatedly denied.

Doegha&rsquo;s colleague, Special Agent Joseph Meckel, then testified that in a follow-up statement, Taylor struck him as truthful. He said the soldier was caught in a difficult situation.

&ldquo;He took what I saw as appropriate steps to secure his perimeter. &hellip; Then he returned fire to protect the lives of this soldiers,&rdquo; Meckel said.

On Thursday, Sgt. 1st Class Charles Holland, a friend of Taylor&rsquo;s and fellow platoon sergeant in a route clearance unit, said that he hadn&rsquo;t faced a situation such as Taylor&rsquo;s.

&ldquo;I never had to make that decision,&rdquo; he said.

Holland described the violence and unpredictability of Wardak province in the summer of 2011, when his and Taylor&rsquo;s platoons were each struck multiple times by hidden bombs and small-arms fire. Taylor himself was seriously injured days after the shooting, on Aug. 2, when a rocket-propelled grenade struck his vehicle, disfiguring his face.

&ldquo;The guys that we were fighting against were just smart,&rdquo; Holland said. &ldquo;At times, for a week or two, we&rsquo;d be on top of them &hellip; then overnight they&rsquo;d change up.&rdquo;

Capt. Brett Fuller, former executive officer of Taylor&rsquo;s unit, the 541st Sapper Company, testified Taylor was intensely driven to bring his men home safely, especially after a recent death in the unit. Fuller and Taylor referred to the men as &ldquo;babies,&rdquo; Fuller said.

&ldquo;Knowing Sgt. Taylor, the one thing that would&rsquo;ve gone through his head is &lsquo;How do we get our babies home?&rsquo;&rdquo; he said.

Testimony in the hearing was to continue Thursday night and into Friday if necessary.

An investigating officer in the Article 32 hearing, similar to a pre-trial hearing, will make a recommendation for disposition of the charges, which could include forwarding to court-martial. If convicted at court-martial, Taylor could face three years in prison for the homicide, according to the Uniform Code of Military Justice.