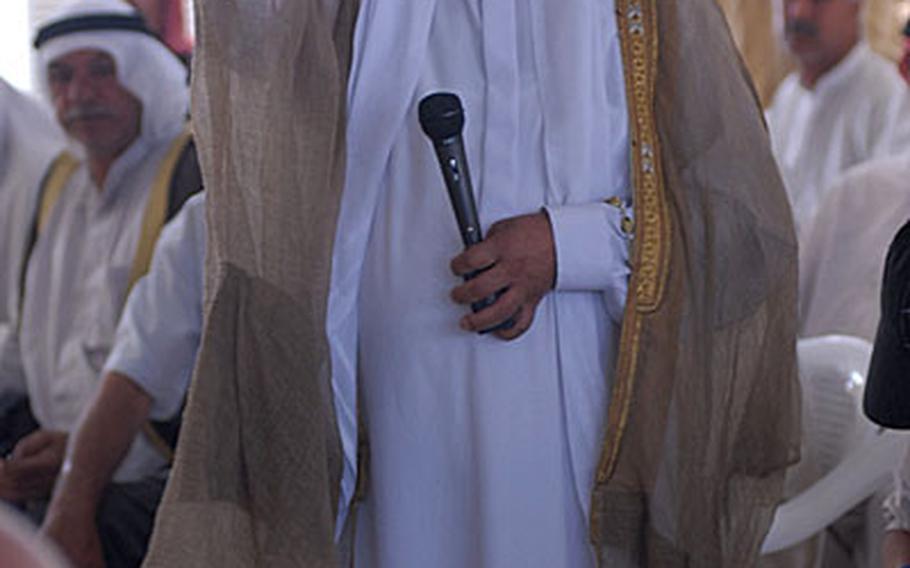 During a meeting with an advisory committee for Iraqi Prime Minister Nouri al Maliki on reconciliation, a local sheikh of the Western Baghdad district of Abu Ghraib voices his grievances against a local Iraqi Brigade, made up of mostly Shiites, that has been accused of misconduct in the predominately Sunni area. (Zeke Minaya / S&S)

During a meeting with an advisory committee for Iraqi Prime Minister Nouri al Maliki on reconciliation, a local sheikh of the Western Baghdad district of Abu Ghraib voices his grievances against a local Iraqi Brigade, made up of mostly Shiites, that has been accused of misconduct in the predominately Sunni area. (Zeke Minaya / S&S) 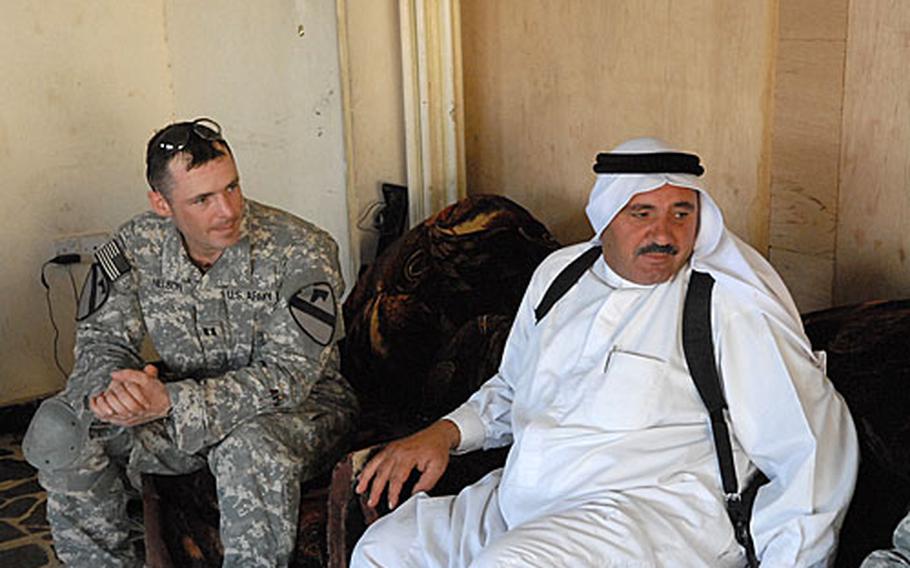 ABU GHRAIB, Iraq &#8212; Sheikh Mohammed Faraj al-Alwani, a leading sheik in the western Baghdad district of Abu Ghraib, says he has no great love for the United States. He would prefer that American forces were not in Iraq.

&#8220;Every honorable Iraqi needed to resist the occupation,&#8221; he said of the early days of the American presence in Iraq.

But Sheikh Mohammed has, as of late at least, become a pragmatist.

&#8220;The real danger does not come from the Americans but comes from Iran,&#8221; he said. &#8220;Americans are a visible enemy and will go home some day. Iran is an invisible enemy and if they come into Iraq they will never leave.&#8221;

Sheikh Mohammed, like many Sunni leaders, once turned away from the U.S.-backed national government in Baghdad and resisted &#8212; if not out right fought against &#8212; American troops in Iraq.

But after a Sunni boycott of the 2003 elections and with the growing might of Shiite militias, Sunnis found themselves on the verge of disenfranchisement. &#8220;That was a mistake,&#8221; Sheikh Mohammed said of the Sunnis&#8217; self-exclusion from the political process.

Sheikh Mohammed, mirroring a growing trend, has changed course and agreed to work with American forces. The oppressive rule of al-Qaida-brand Islamic extremism and the fear of creeping Iranian influence on the central government has made an alliance with Americans the most palatable option, Sheikh Mohammed said.

He has been one of several community leaders in Abu Ghraib who has joined with Americans in organizing groups of deputized civilians &#8212; dubbed &#8220;volunteers.&#8221;

But teaming with Sunni tribesmen &#8212; some former insurgents themselves &#8212; to rid Abu Ghraib of al-Qaida in Iraq is only one battle for U.S. military leaders. Army officials are now attempting to quell the fear of the Shiite-dominated central government that the civilian groups will eventually coalesce into a Sunni militia.

U.S. Army Col. P.J. Dermer, a liaison with the Iraqi committee for reconciliation, an advisory group to Iraqi Prime Minister Nouri al-Maliki, said the national government is pleased with the gains in security in Abu Ghraib. But &#8220;what they don&#8217;t want to happen is a whole bunch of local groups springing up that are loyal only to local groups,&#8221; he said.

According to a recent U.S. government report, civilian watch groups such as the volunteers have shown promise. The National Intelligence Estimate on Iraq, a report drawn from the 16 agencies that constitute the American intelligence community, stated in early August that &#8220;&#8230; the emergence of &#8216;bottom-up&#8217; security initiatives, principally among Sunni Arabs and focused on combating AQI (al-Qaida in Iraq), represent the best prospect for improved security over the next six to 12 months &#8230;&#8221;

But before these efforts can translate into longer term stability, the persistent hurdle of sectarian rivalries must be overcome, according to the report. The assessment&#8217;s authors go on to write that &#8220;&#8230; we judge these initiatives will only translate into widespread political accommodation and enduring stability if the Iraqi Government accepts and supports them.&#8221;

Difficult relationsIn Abu Ghraib, the lack of acceptance of the volunteers has been embodied by the fractious and hostile relationship between the community and the Muthana Brigade, a local Iraqi army unit.

The Iraqi Brigade, which is made up of mostly Shiites, has been accused of harassing members of the volunteers and executing raids through Sunni villages and taking detainees even after being transferred out of the area.

Capt. John Nelson, a 33-year-old native of Louisville, Ky., said his company of 2nd Battalion, 5th Cavalry Regiment soldiers swapped battle spaces with the Muthana Brigade a little more than two months ago but have had to be vigilant for the Iraqi soldiers&#8217; encroachment into the area.

&#8220;The people see them as a tremendous opposition to what we are trying to do,&#8221; he said. Soon after taking up their new post, Nelson&#8217;s company came across Muthana Brigade soldiers searching homes in their former area and apprehending detainees. The American soldiers stopped the raids and had the detainees released. &#8220;That gave us a huge amount of credibility with the people,&#8221; he said. &#8220;That was a huge win for us.&#8221;

In a meeting earlier this month with American military officials and the Baghdad provincial governor, Brig. Gen. Nassir al-Hiti, commander of the Muthana Brigade, denied any wrongdoing and complained that his men were being wrongly accused.

Lt. Col. Kurt Pinkerton, commander of the 2nd Battalion, 5th Cavalry Regiment, was at that meeting with Nassir and said afterward that he would be willing to sit down and work with the Iraqi commander to try to address his concerns. But he added that reports of improper conduct by the Iraqi unit could not be ignored.

Pinkerton, who has been at the forefront of organizing the civilian watch group, has said as early as this past spring when he first began to reach out to the local tribesmen that he did not want to help create another militia and further complicate the faction-ridden battlefield around Baghdad.

&#8216;Show the progress&#8217;He has insisted that the more than 2,000 volunteers be registered and have their biometrics information recorded and their photos taken. He has worked to steer many of them toward positions as police recruits in hopes of integrating them with official Iraqi security forces and has not provided them with weapons.

The group is, however, slated to receive uniforms, identification badges and pay from the American military as well as continued support from local U.S. troops.

&#8220;We as a community have to work to show the progress so then we can reach out to the Iraqi government for the help that we need,&#8221; he said.

Since his run-in with the Muthana Brigade, Nelson has forged a friendly working relationship with Sheikh Mohammed and other community leaders. His men have not seen an attack in the area since June 10, Nelson said. Several joint checkpoints, manned by both Sunnis and Shiites, have been established in the area and Nelson&#8217;s unit has begun addressing other needs of the community besides security.

A canal cleaning project was recently completed, and several generators were slated to be installed throughout several villages, Nelson said.

But the disconnect between Abu Ghraib and the national government continues. During a recent visit to the area by representatives of the Iraqi prime minister&#8217;s advisory committee for reconciliation, community leaders dwelled almost exclusively on their complaints against the Muthana Brigade.

For several months, some U.S. forces have tried a new approach. They have recruited Iraqis to protect specific sites as well as their neighborhoods. Called &#8220;volunteers,&#8221; &#8220;concerned citizens&#8221; and other terms, the Iraqis &#8212; including former insurgents &#8212; are screened, trained and paid. Stars and Stripes examines this strategy.

Sunday: In the southern outskirts of Baghdad, Iraqis are taught the basics about security. Some say they are fed up with al-Qaida&#8217;s brutality.

Today: Civilian watch groups such as the volunteers have shown promise, a report says. But how they will fit in with Iraq&#8217;s complicated power struggles remains to be seen.