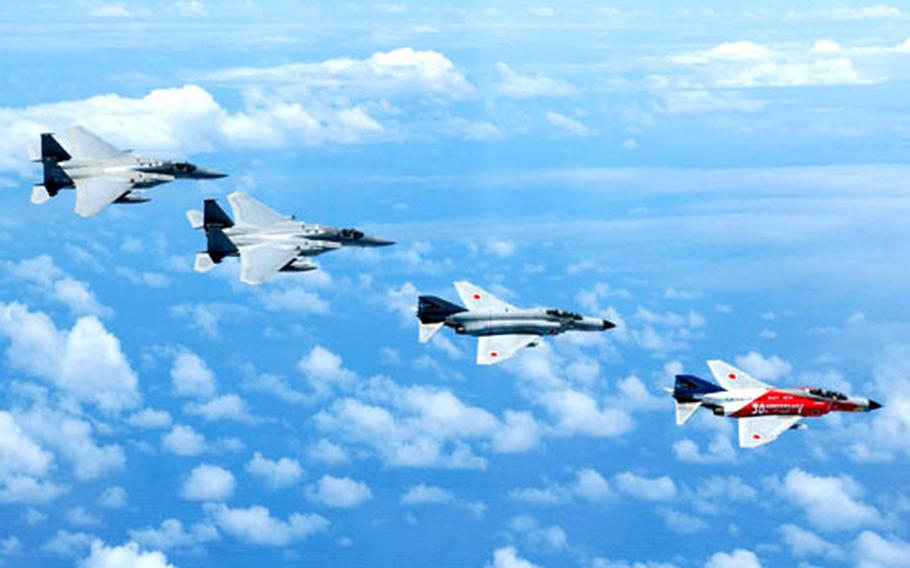 Kadena-based F-15s and Japanese F-4s from Naha practiced large-group fighting on Friday, with as many as eight aircraft squaring off against a similar number of &#8220;enemy&#8221; aircraft.

Both sides engaged in a &#8220;defense of Japan&#8221; scenario, where one side practiced protecting airspace from the enemy force&#8217;s incursion.

In some exercises, pilots had to contend with &#8220;faulty&#8221; jammers and radar warning receivers and other setbacks.

The American pilots did have one advantage: the faster F-15 replaced the F-4 in the U.S. Air Force. But in many cases, the quality of the pilot is just as important as the aircraft.

&#8220;It was not a one-sided battle,&#8221; Smith said. During one engagement, the American pilots had prepared for one set of tactics, but the Japanese pilots had other plans.

The F-4 traces its history back to the 1950s as the Navy&#8217;s first Mach 2 carrier-based aircraft. McDonnell Douglas began producing the F-4C for the Air Force in 1963. The Japanese had the F-4EJ specially designed with most of its offensive systems stripped in accordance with their constitution, which bans their forces from offensive missions. It did fit the aircraft with what at the time was advanced tail warning radar, along with air-to-air guided missiles.