Pozzuoli: Envision ancient gladiator matches at one of the oldest Roman amphitheaters Buy Photo
Modern-day apartment buildings line the roads just outside the fence surrounding the Flavio amphitheater, found in the center of Pozzuoli, Italy. The theater is thought to have been constructed during the era of emperor Vespasian, from 70 to 79. (Lisa M. Novak/Stars and Stripes)

Buy Photo
Modern-day apartment buildings line the roads just outside the fence surrounding the Flavio amphitheater, found in the center of Pozzuoli, Italy. The theater is thought to have been constructed during the era of emperor Vespasian, from 70 to 79. (Lisa M. Novak/Stars and Stripes) Buy Photo
These walls are a part of the well-preserved section of the Flavio amphitheater, whose construction some experts date to the era of emperor Vespasian, from 70 to 79. (Sandra Jontz/Stars and Stripes) Buy Photo
Bricks form the numeral 1977, the year that the last major restoration was done to the Flavio amphitheater in Pozzuoli, Italy. The amphitheater is the third largest surviving theater of the Roman empire. (Sandra Jontz/Stars and Stripes) 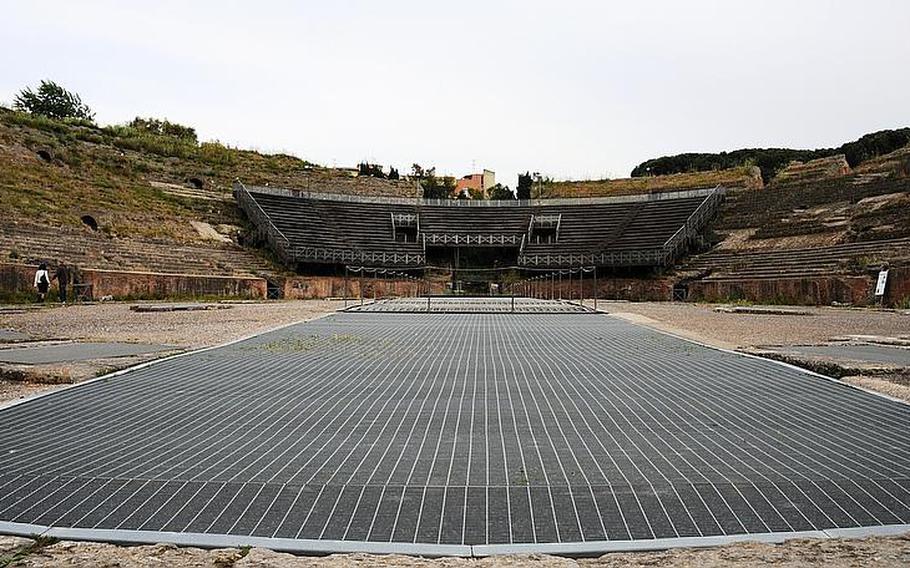 Buy Photo
The vast center arena of the Flavio amphitheater in Pozzuoli, Italy, is where gladiators met their fate, often against exotic animals such as tigers and lions. The gladiators fought to the end - they were either mauled to death, or managed to slay their adversaries. The metal grates cover a large channel in the middle of the arena through which decorative scenes were raised from the underground cells. (Sandra Jontz/Stars and Stripes) 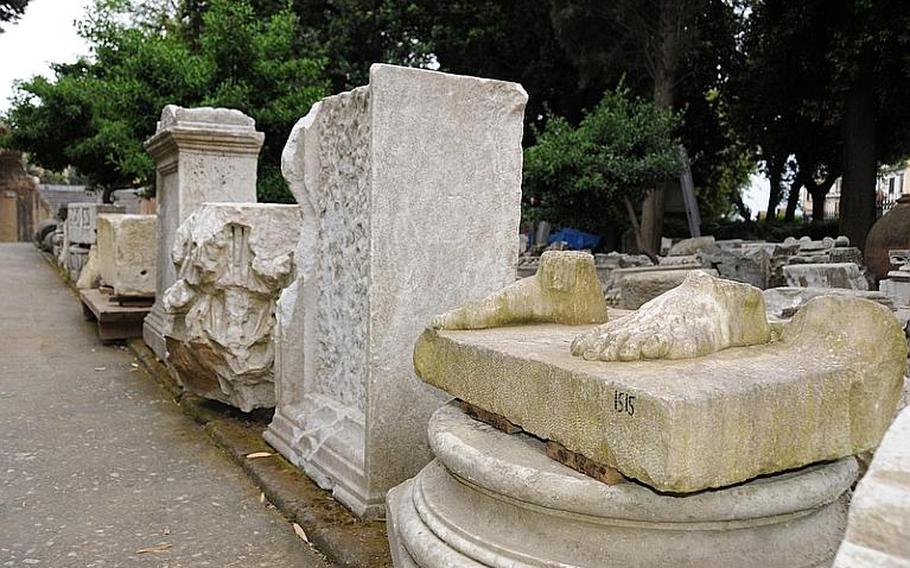 Buy Photo
A row of inventoried columns, statues and headstones seem to haphazardly lie in at the entrance of the Flavio amphitheater - they have been cataloged but not organized for display. (Sandra Jontz/Stars and Stripes)

In a country as old as Italy, it&rsquo;s not unusual to run into modern edifices bumping up against aging structures. It&rsquo;s a nation where old meets new.

At the confluence of the hustling center of the seaside suburb of Pozzuoli, surrounded by the vroom of cars and scooters zipping down the town&rsquo;s main thoroughfare dotted by modern apartments, stores, pubs and a supermarket, stands one of the oldest and largest amphitheaters of Roman history.

According to local legend, the Flavio amphitheater has survived for centuries, nearly unscathed, thanks to local residents&rsquo; devotion to &mdash; and appeals for mercy from &mdash; San Gennaro, who was once imprisoned behind the amphitheater&rsquo;s tufa stone walls. The saint was later beheaded atop a hill near the Solfatara, part of the roughly 40 volcanoes that make up the Phlegeaen Fields in the greater Naples area.

In actuality, the monument has been &ldquo;saved&rdquo; through numerous restoration projects over the decades, projects that were much needed since the amphitheater had become a veritable quarry of materials for building the town that surrounds it. Sadly, though, the ruin is in ruins. Or nearly. The grass around the arena is overgrown and the grounds unkempt. Rows and rows of inventoried columns, statues and headstones lie haphazardly at the entrance way. Visitors cannot tour the underground cells and tunnels that housed animals and awaiting gladiators.

The exact age of the 472-foot-long, 400-foot-wide amphitheater is up for debate. Experts have argued whether the multitier arena was built during the reign of emperor Vespasian, 70-79, or that of emperor Nero, who ruled between 54 and 69.

However, because of an entrance inscription that reads &ldquo;Colonia Flavia Augusta Puetolana Pecunia Sua,&rdquo; which means &ldquo;by the Flavian colony of Puteoli with its own money,&rdquo; experts dated construction beginning during the time of the Flavian emperor Vespasian, according to the handy brochure given to visitors at the entrance.

The elliptic arena of the amphitheater, which could seat 40,000 spectators and is the third largest of the Roman world, is where gladiators met their rivals, most often animals rather than fellow man. Metal grates, which today line the edge of the arena floor, are reminders of the one-time &ldquo;maneuvering shafts&rdquo; that hoisted equipment or animals from the bowels of the amphitheater. Those shafts, along with the large channel in the center of the arena, would have been used to change scenery required for the games or celebratory parades.

Today, Pozzuoli hosts an occasional outdoor musical concert in the amphitheater &mdash; and the U.S. Navy&rsquo;s band stationed in Naples has performed there.