Laura Bryan as Jonas Salk, seated at center, addresses the issue of whether saving people is a more powerful act than killing them as, from left, Ashley Ivory as Harriet Tubman, Resasha Williams as Martin Luther King Jr. and Zach Splittstoesser as President Nixon line up behind her to signify their votes. As each of the top three contestants make their final arguements, other students either stood by them, or deserted them for another candidate. (Terry Boyd / S&S) 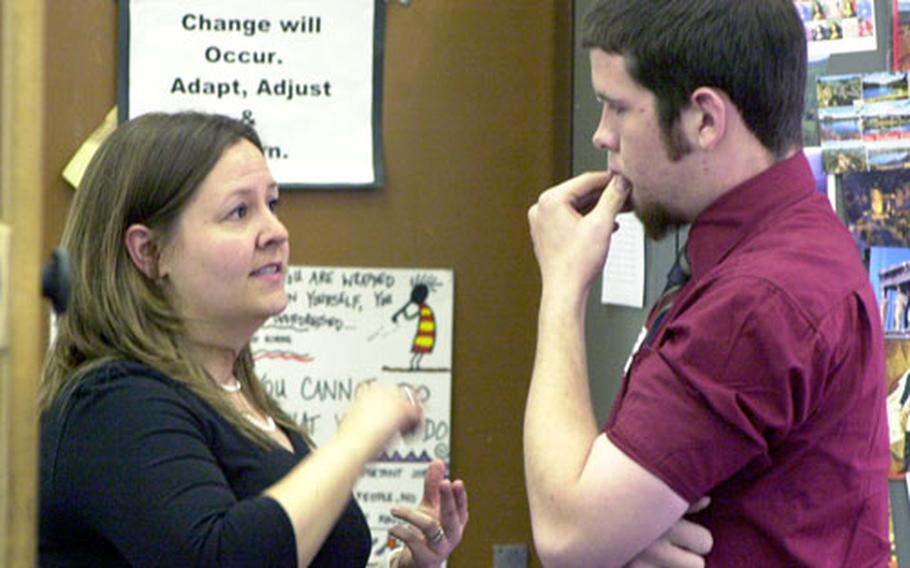 Lenin — James Lampe — huddles with Heide Kretz, co-moderator of the Power of One conference. Toward the end, the top three contenders were allowed a brief session to consult with the teacher of their choice, trying to develop a last-minute strategy. (Terry Boyd / S&S) 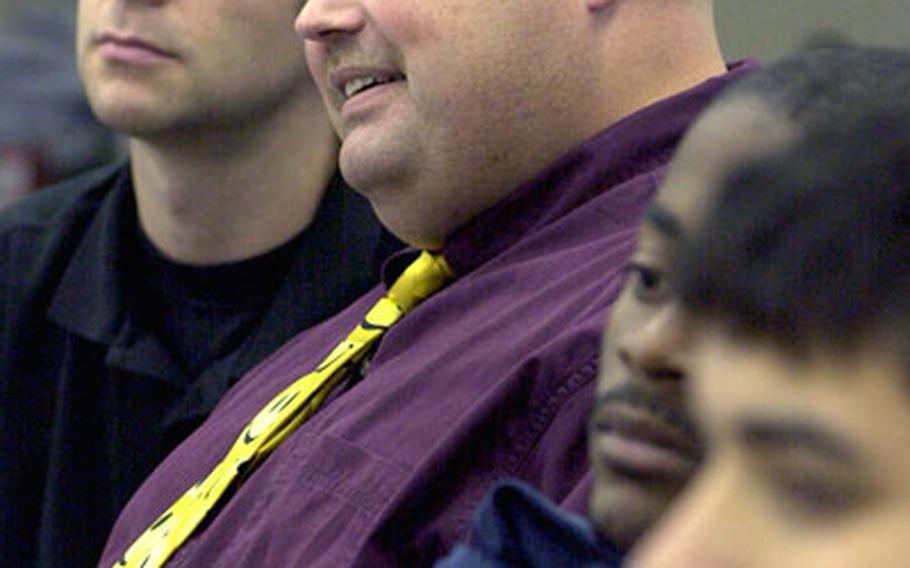 Carter Hollenbeck, second from left, wears a bemused expression as he listens to a presentation. Also in the audience was math teacher Tim Kelly. (Terry Boyd / S&S)

Killing is just as powerful as saving, shot back LaCross Gray, as Saddam Hussein: &#8220;Power is power, negative or positive.&#8221;

At Baumholder American High School, the conclusion of the second Power of One conference to determine history&#8217;s most influential personality was as shocking as last year&#8217;s inaugural project.

After nearly eight hours of debate, Vladimir Lenin emerged as 2006&#8217;s pick as the most powerful figure in history, succeeding Adolf Hitler, 2005&#8217;s victor in the Department of Defense Dependents School program. As disquieting as the results were, the event more than fulfilled its purpose.

Even after James Lampe as Lenin triumphed in the voting, 17 honors program sophomores, several teachers and the school assistant principal lingered.

Using every tool in their intellectual and verbal toolboxes, they kept debating whether the power of enlightenment can ever carry the day over the power of totalitarianism.

Each of the students drawn from Kretz&#8217;s literature class and the history class of co-moderator Carter Hollenbeck jockeyed to make his or her point during the run-up to two voting sessions. The students chose which character they wanted to represent.

A great deal turned on how the historical characters used their power during final presentations, the culmination of a year&#8217;s worth of research worth 30 percent of the students&#8217; grade.

The result was an exercise in intellectual agility with all the elements &#8212; spin, humor, rhetoric and drama &#8212; of good theater, hokey reality shows and ruthless political campaigns combined.

The top three vote-getters were as different as the characters they played. A quietly intellectual Jacob Lamoureaux, who arrived at Baumholder from W&#252;rzburg just six weeks ago, was the most aggressively on-message speaker. He took the role of Greek mathematician and inventor Archimedes and promoted technological innovation as the most powerful force in human history.

Two thousand years before the Soviets dueled the Americans in a space race, Lamoureaux said, Archimedes was laying the foundations of science and mathematics that made all that possible.

But after Archimedes told of saving ancient Syracuse, defeating a larger force with the catapult he invented, Lampe&#8217;s cunning Lenin had him.

&#8220;They did, indeed,&#8221; Jacob conceded cheerfully before spinning that defeat into victory on the way to third place.

Considering those three were up against the Henry Fords and Martin Luther King Jrs., no one thought a communist like Lenin or the obscure Archimedes would make it to the final round, Hollenbeck and Kretz said.

But Lampe was adept at pre-empting criticism of Lenin&#8217;s brutal methods while emphasizing largely unrealized ideals &#8212; and growing a Lenin-like goatee, Hollenbeck said.

Rather than admiration for dictators or for power for power&#8217;s sake, most of the group took away a respect for the immensity of human knowledge.