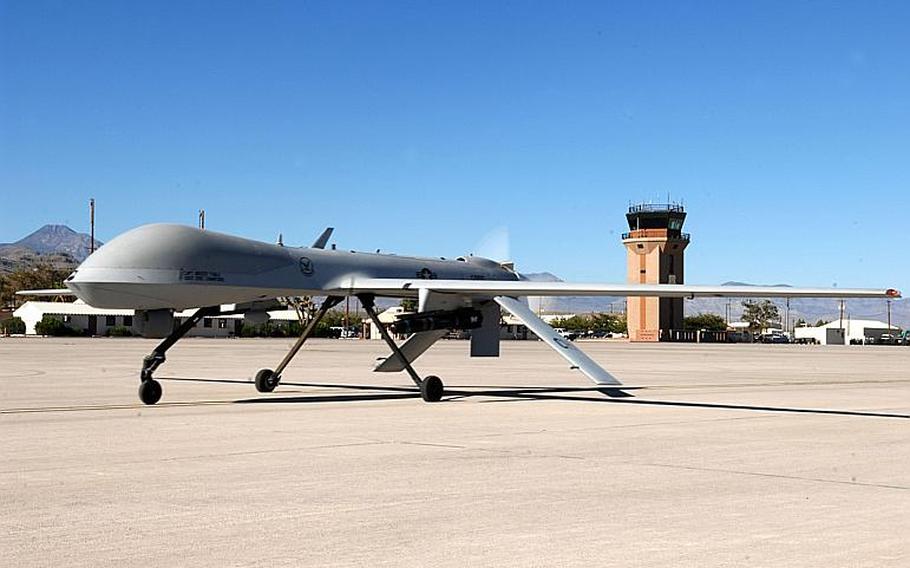 An MQ-1B Predator remotely piloted aircraft taxies down a runway at Creech Air Force Base, Nev., in August 2008. A Predator from Creech crashed into the Mediterranean Sea in September 2013 because of a failed power converter in the aircraft's onboard control module, according to an Air Force accident investigation report released Wednesday, April 2, 2014. The aircraft was returning from a 20-hour mission in support of U.S. Africa Command. Larry Reid/U.S. Air Force (Larry Reid/U.S. Air Force)

KAISERSLAUTERN, Germany — A loss of power caused a remotely piloted MQ-1B Predator to crash into the Mediterranean Sea last fall while returning from a mission over Africa, the Air Force announced late Wednesday.

A malfunctioning power converter in the aircraft’s control module, which led to the loss of stabilizer control and engine power, caused the mishap, according to an abbreviated accident investigation report released by Air Combat Command.

The aircraft, deployed from the 432nd Wing at Creech Air Force Base, Nev., was returning from a 20-hour intelligence, surveillance and reconnaissance mission for AFRICOM, a news release said.

The Air Force did not say from what location the drone had been flying or what particular mission in Africa it was supporting. The aircraft and one communication pod were lost on impact — a loss valued at approximately $5.3 million, according to the release. There were no injuries or damage to other government or private property.

Flight controllers lost communications with the aircraft while preparing to hand the unmanned aerial vehicle over to launch and recovery controllers, according to the release. Two seconds before losing its satellite link, the aircraft transmitted a set of electrical, flight control and engine warning indications. Investigators probing the crash determined this was due to the power malfunction, the release said.

At that point, the Predator lost control and began “a rapid spiral descent into the Mediterranean Sea.”

The accident was among at least four involving the Air Force’s MQ-1B Predators in 2013.

In May, a Predator crashed 5.6 hours into a local training mission near Creech Air Force Base, according to the Air Force’s accident investigation report on the incident.

In June, another Predator crashed during a landing attempt at Jalalabad Air Base, Afghanistan, in windy conditions. An Air Force Predator also crashed in October about six miles from Holloman Air Force Base, N.M., while conducting a routine training mission.