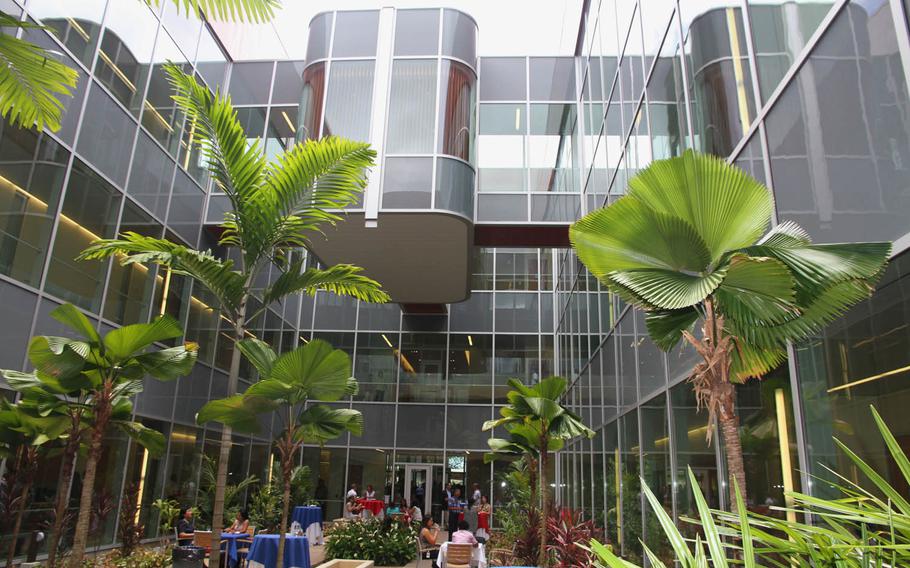 Buy Photo
Overhanging in the enclosed courtyard of the Defense POW/MIA Accounting Agency's new science lab is a secluded enclosure that families will use to view the remains of loved ones identified by the agency. (Wyatt Olson/Stars and Stripes)

Buy Photo
Overhanging in the enclosed courtyard of the Defense POW/MIA Accounting Agency's new science lab is a secluded enclosure that families will use to view the remains of loved ones identified by the agency. (Wyatt Olson/Stars and Stripes) Buy Photo
A Defense POW/MIA Accounting Agency representative tells visitors about the family viewing room at the agency's new lab, which serves as a centerpiece of the three-story building. (Wyatt Olson/Stars and Stripes) 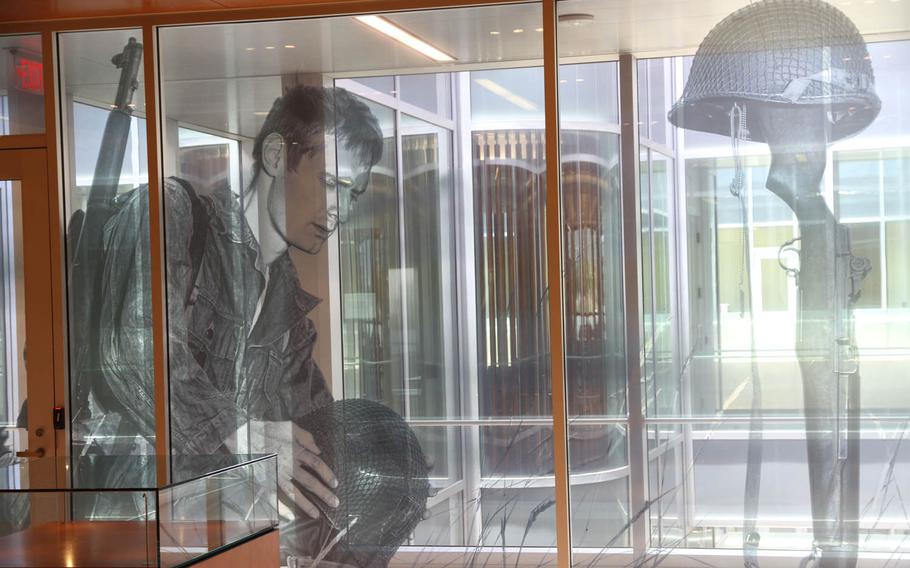 Buy Photo
This large image of a soldier bowing before a fallen comrade is etched into a glass wall leading to the main research area on the third floor of the new Defense POW/MIA Accounting Agency lab at Joint Base Pearl Harbor-Hickam in Hawaii. (Wyatt Olson/Stars and Stripes) 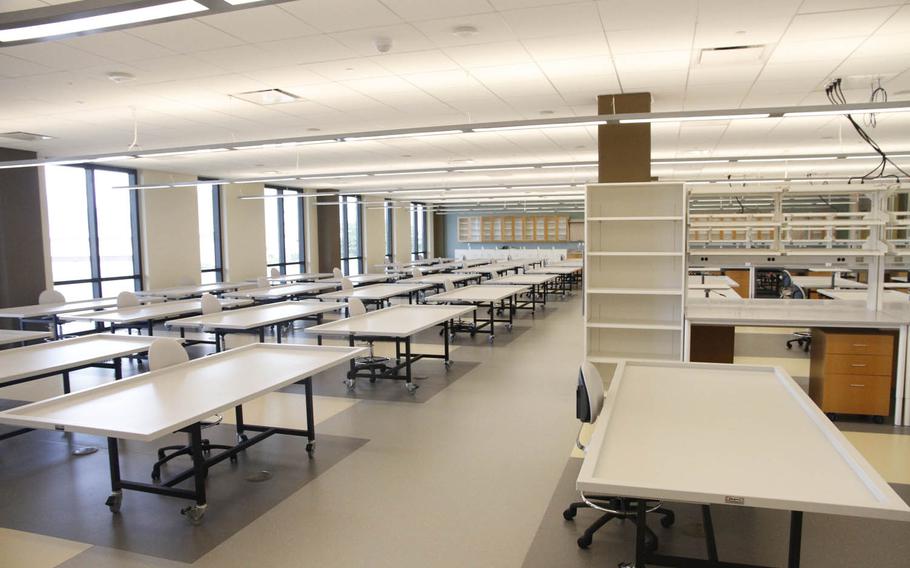 Buy Photo
The Defense POW/MIA Accounting Agency's new lab has a vastly expanded work area where remains are analyzed in the quest for identification. The lab's storage area for remains is double what the DPAA has on hand in a dozen buildings at Joint Base Pearl Harbor-Hickam in Hawaii. (Wyatt Olson/Stars and Stripes) Buy Photo
The Rev. Kahu Kordell Kekoa blesses the maile lei before guests untied it Monday, July 27, 2015, during the dedication ceremony of the Sen. Daniel K. Inouye DPAA Center of Excellence at Joint Base Pearl Harbor-Hickam in Hawaii. (Wyatt Olson/Stars and Stripes) Buy Photo
Servicemembers drape a flag over one of five caskets taken from the National Memorial Cemetery of the Pacific Monday, July 27, 2015, during a dignified transfer ceremony. The caskets contain the remains of unknown sailors and Marines who died on the USS Oklahoma on Dec. 7, 1941, and were being transferred to the Defense POW/MIA Accounting Agency for identificaiton. (Wyatt Olson/Stars and Stripes) Buy Photo
A casket holding the remains of sailors and Marines killed on the USS Oklahoma is lifted onto a truck Monday, July 27, 2015, in Honolulu during a dignified transfer ceremony. (Wyatt Olson/Stars and Stripes)

JOINT BASE PEARL HARBOR-HICKAM, Hawaii — Ask the chief of the Defense POW/MIA Accounting Agency about the benefits of the massive science lab dedicated here Monday, and high on his list is worker morale.

“My morale went up the first minute I walked into it,” Michael Linnington, who was named director of the DPAA in June, told reporters after the morning dedication that included a Hawaiian-style blessing.

The 136,000-square foot, three-story building “has a quiet ambiance and professionalism that’s required of this mission,” said Linnington, who earlier this year had shepherded the new hybrid agency into existence during his last months as a lieutenant general in the Army.

Nearly 500 personnel are expected to move into the building in the coming months, primarily from 12 buildings, including some windowless portables with barely functioning air conditioning.

“So I know when we move people out of the buildings that are scattered all over Joint Base Pearl Harbor into here, their morale will go up as well,” Linnington said.

Employee dissatisfaction was among the internal ills that led to the consolidation earlier this year of the former Joint POW/MIA Accounting Command and the Defense POW/Missing Personnel Office.

Then-Defense Secretary Chuck Hagel ordered the consolidation in March 2014, prompted by complaints from the public and an inspector general’s report that concluded the former agencies lacked a clearly defined mission and strategic plan and were plagued by workplace dysfunction.

The new $85 million lab was in the works well before any of that came to light, however, with the groundbreaking in August 2011 attended by Sen. Daniel Inouye, who lobbied fiercely for the state-of-the art facility to be built in his home state of Hawaii. The building, which doubles the amount of storage available for remains being examined, is named in his honor.

“I think the simple fact that all the analysts will be in one location will tremendously help the process of identification,” said Navy Capt. Edward Reedy, DPAA’s medical examiner.

“Whenever you put a lot of scientists in one place, good things happen,” he said. “They make suggestions to each other, ask questions.”

Reedy also couldn’t ignore the potential impact the new lab could have on the scientists and technicians working there.

“The fact that we have twice the analytical space and that we’re not sitting on top of each other in this new building will also be very helpful,” Reedy said.

The building possesses an open, airy design, with a large, enclosed garden courtyard with tables and chairs.

Perhaps the most unusual feature is a living-room size enclosure suspended over the courtyard that’s connected by three walkways to the third floor offices. The room is intended to be used as a viewing area for families, who often want to look at the remains of their relative after the agency has made an identification, Reedy said.

“They want to have a few moments alone with the remains, and that’s completely appropriate,” he said. The viewing room, which has dark wood vertical louvers over the windows, is outside the highly restricted evidence area, where only essential personnel are allowed.

“There’s a sense of privacy in there,” Reedy said. “I think it’s very tastefully designed.”

Linnington said the agency is “optimistic” that the number of identifications it will make this year won’t drop by much — despite the reorganization and the move into the new lab.

That outlook comes in part from a large number of remains that are now being brought to the Hawaii location, he said.

On Sunday the remains of 36 Marines who were buried on the island of Tarawa during World War II were flown to the joint base aboard three C-130s.

Early Monday morning, five caskets that had been exhumed at the National Memorial Cemetery of the Pacific in Honolulu were moved to the DPAA during a “dignified transfer” ceremony. The caskets contain the remains of unknown individuals who died aboard the USS Oklahoma during the Dec. 7, 1941, surprise attack by Japan. Oklahoma remains were commingled when originally buried, and it is not yet clear how many individuals will be identified in these five caskets.

Sixty-four caskets are expected to be exhumed by the end of October, Linnington said.

The DPAA expects to expand its partnerships with private organizations involved in the search for missing remains. In the past, critics of the accounting effort have complained that the work done by families and outside organizations has been ignored.

The Tarawa remains were located by History Flight, Inc., a Florida nonprofit whose members searched for years before discovering the Marines’ sandy grave on Betio Island.

Linnington said he’s holding a director’s symposium this week at Joint Base Pearl Harbor-Hickam with the agency’s managers to hammer out its final organizational structure and staffing needs.

In general, the agency will be divided into west and east sections, with one handling recovery of remains in the Pacific out of Pearl Harbor and the other handling Europe and the Mediterranean from Washington, D.C., where the agency has already staffed up to 100 employees, he said.

The newly configured agency will be fully operational by the end of the year, he said.

“I think we’ll be able to achieve what we’re looking for in the end stage, which is better accounting, more capability across the world,” Linnington said.