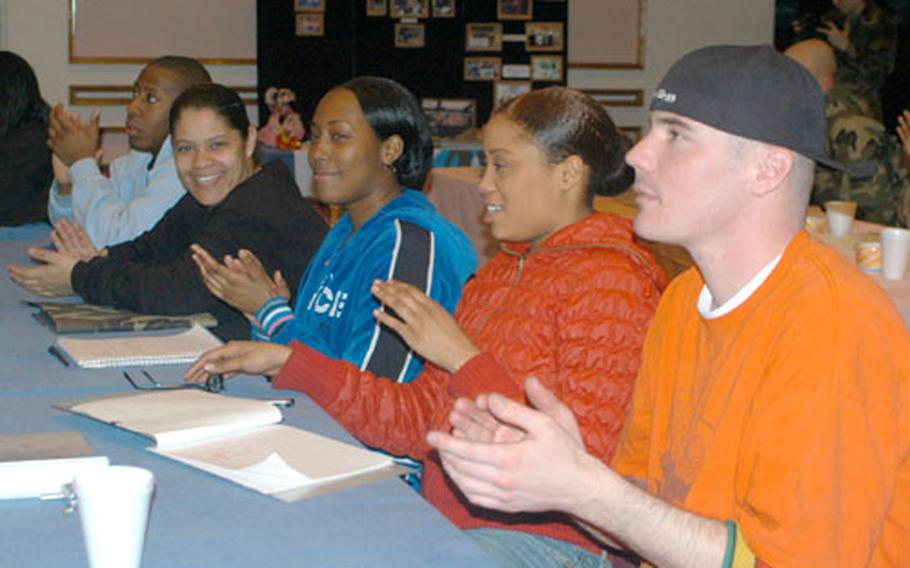 Representatives from BOSS (Better Opportunities for Single Soldiers) view presentations Tuesday in a contest to judge the best event for single soldiers in South Korea’s Area I this quarter. (Seth Robson / S&S)

CAMP CASEY, SOUTH KOREA &#8212; A Halloween Bash with a jalapeno-eating contest and a drink made of six types of liquor, beer and kimchi juice was judged the best event for Area I single soldiers this quarter.

BOSS (Better Opportunities for Single Soldiers) representatives gathered at Camp Casey on Tuesday to review BOSS events and select the best one of the quarter, which began in September.

The Halloween Bash, by Camp Red Cloud soldiers, was judged best overall, although events at camps Casey/Hovey, Stanley and Essayons/Sears/Kyle also were recognized, said Area I Command Sgt. Maj. Jolanda Lomax. Camp Page, which won the last BOSS contest, didn&#8217;t compete because the installation is to close next month, she said.

BOSS representative Pvt. Robert Brack, 21, of Dublin, Ga., who is serving with the 122nd Signal Battalion at CRC, said the jalapeno-eating contest was one of the highlights of the Halloween Bash.

Soldiers also drank a witches&#8217; brew with six types of liquor, beer and kimchi juice, a concoction that made people want to vomit, he said.

The young soldier, who serves with Headquarters Headquarters Battery, Division Artillery, 2nd Infantry Division, said 150 people watched the show, which featured a freestyle rapping contest and break dancing. The show made $500 &#8212; about what organizers spent on free food, he said.

&#8220;There is a great demand from the soldiers&#8221; for golf, said Harris, with the Camp Casey U.S. Army Garrison. The sport, he said, is &#8220;a great way to develop camaraderie. &#8230; All ranks and ages can play against each other. With other sports such as flag football and basketball, you require more athletic ability.&#8221;

The U.S. soldiers all were eliminated in the first round, he said. The KATUSAs &#8220;play all the time but even though they were killing us, it was relaxed and we were joking. They would beat us and the next thing they would do was come up and shake our hands. &#8230; We bonded with the KATUSAs and now they know who I am and are friendly with me.&#8221;

All the events showcased at the Camp Casey BOSS conference will go against BOSS events peninsula-wide in an April 19-22 competition at Camp Humphreys. The winner will go to the Department of the Army competition in September, she said.

Area I commander Col. Jeff Christiansen said BOSS, with the Army Family Action Plan and the Well-being Council, provides him important feedback from single soldiers, &#8220;which is the predominant soldier group here in Area I.&#8221;

BOSS acts on behalf of single soldiers of all ranks but concentrates on enlisted soldiers, he said. &#8220;The soldiers become better members of our formation as a result of participation in BOSS.&#8221;