Posters are the latest tool against insurgents in Iraq 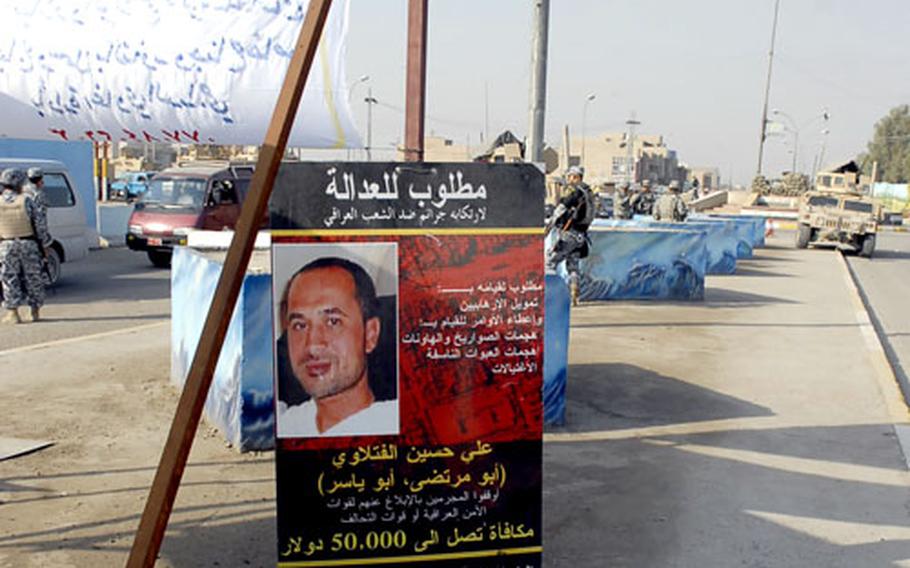 BAGHDAD &#8212; In a country that often feels like the Wild West, security forces are turning to a tactic straight out of the American West to isolate and arrest suspected insurgents: the wanted poster.

The posters are hung throughout Baghdad in bustling markets, at checkpoints, even on semi trucks. They include photos of the suspects, along with descriptions of their crimes and, maybe most importantly, offer a cash reward.

The newest low-tech approach &#8212; reminiscent of the deck of cards with pictures of key figures in the Saddam Hussein regime that the U.S. military produced at the beginning of the Iraq war &#8212; is paying dividends, Iraqi and U.S. officials said.

Tipsters looking for reward money have turned in a few suspected insurgents but, more than that, having their picture plastered across town has driven many of the wanted underground, officials said.

"Because they became famous, everybody knows them and they can&#8217;t work inside the city," said Maj. Falah Mustafa, who works in Baghdad&#8217;s Saha neighborhood, one of many areas in the south of the city that has seen a steep drop in violence in recent months.

Military officials with Multi-National Division-Baghdad would not release how many suspected insurgents they are targeting with the campaign, but said that posters were also printed in miniature on millions of leaflets distributed across Baghdad.

The posters offer tipsters rewards of several thousand dollars for information leading to the capture of suspected insurgents. Tips are supposed to go to the Iraqi National Police.

Over the past year, attacks in Iraq have dropped sharply and bombs, rather than direct confrontation, have become the weapon of choice. The posters fit into a wider strategy that has included walling off neighborhoods and markets with concrete blast barriers and adding numerous checkpoints to filter traffic and more effectively search vehicles.

Capt. Garrett Cathcart helps train the national police and said the willingness of Iraqis to come forward with information about the suspects on the posters is directly related to improved security and more professionalism in the Iraqi security forces.

"Before, if you turned someone in you might have someone (insurgents) visit your house later that night," said Cathcart, who is serving in Baghdad&#8217;s Rashid district with the 1st Brigade Combat Team, 4th Infantry Division.