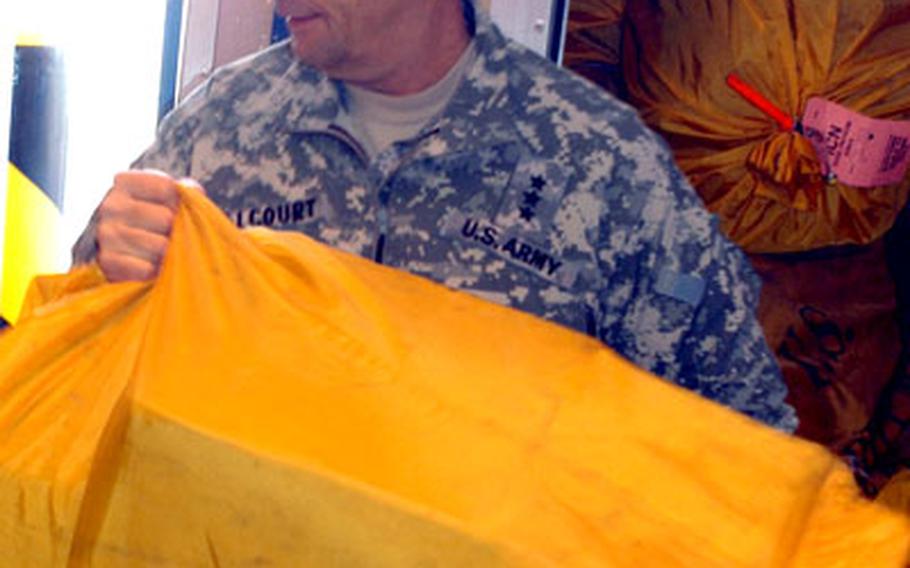 The $6 million Joint Military Mail Terminal was funded by the South Korean government under the &#8220;In-Kind Program,&#8221; in which they build the facility to replace an older one: in this case, the one that had operated at Gimpo Airport.

And 8th Army Chief of Postal Operatinos Gregory Mackessy said the new facility &#8212; manned by both Army and Air Force personnel &#8212; will greatly streamline the mail-handling process for the U.S. military.

Under the old system, mail coming into the country would be sent by truck from Incheon to Gimpo, sorted there, and in many cases, brought back to Incheon for further distribution. Giving the workers direct access to incoming shipments will mean less handling of the mail, which in turn should result in fewer delivery issues, Mackessy said.

And the military will save about $500,000 a year since it will no longer contract truck drivers to transport the mail between the two airports, he said.

Paul Munshower, an Air Force postal detachment chief, said the JMMT will allow mail handlers to get mail on earlier flights out of South Korea, which could mean priority mail will be delivered a day earlier than normal.

Having more convenient access to incoming and outgoing mail, as well as larger sorting and processing areas, might translate to shorter workdays.

The Air Force has staffed two 11-hour shifts while their Army counterparts run a 14-hour shift.

Munshower said military postal workers may end up working only one 11-hour shift per day.

The 21,572-square-foot facility was partially designed by the U.S. Army Corps of Engineers Far East District. The remainder was designed and constructed by a South Korean architectural and engineering firm, with oversight by the South Korean military.