Poseidons watch seas from above as Russia lurks in the Mediterranean 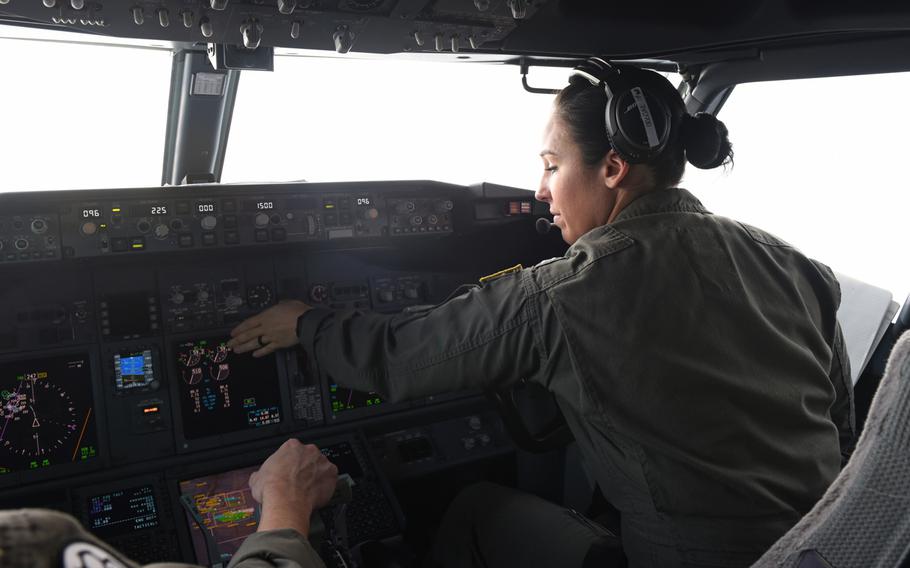 Pilots work the controls of a P-8A Poseidon on Feb. 26, 2019 in a flight over the Mediterranean Sea during the exercise Dynamic Manta. The forward-deployed squadron from Jacksonville, Fla., is conducting aerial reconnaissance that U.S. military leaders say is important in the face of increased Russian submarine activity in European waters. (Sean Morton/U.S. Navy)

Pilots work the controls of a P-8A Poseidon on Feb. 26, 2019 in a flight over the Mediterranean Sea during the exercise Dynamic Manta. The forward-deployed squadron from Jacksonville, Fla., is conducting aerial reconnaissance that U.S. military leaders say is important in the face of increased Russian submarine activity in European waters. (Sean Morton/U.S. Navy) 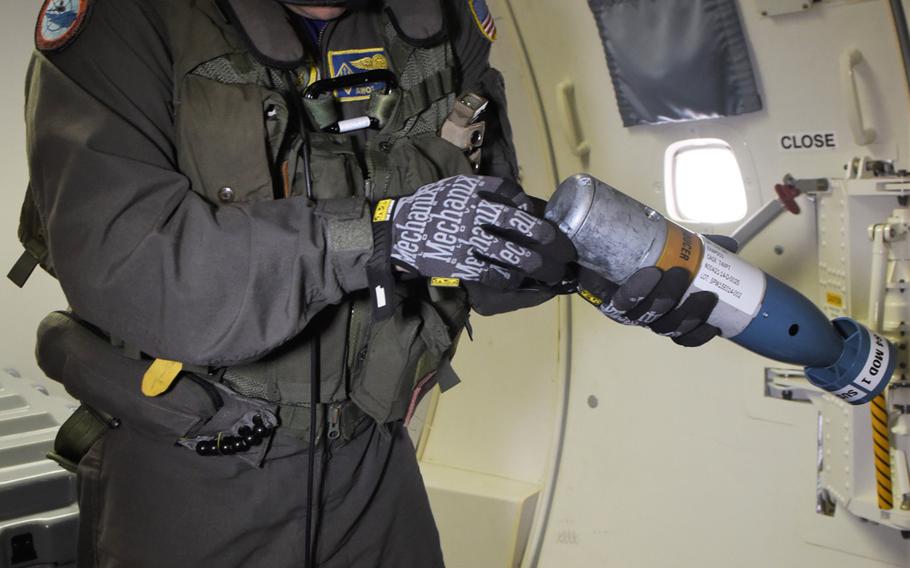 Petty Officer 1st Class Jeffrey Graham prepares to eject a sonobuoy to track a submarine in the Mediterranean Sea on Feb. 26, 2019, during exercise Dynamic Manta. On regular aerial patrols, the P-8A Poseidons in Sigonella often use sonobuoys to track Russian submarines, which have become more active in European waters. (Sean Morton/U.S. Navy) 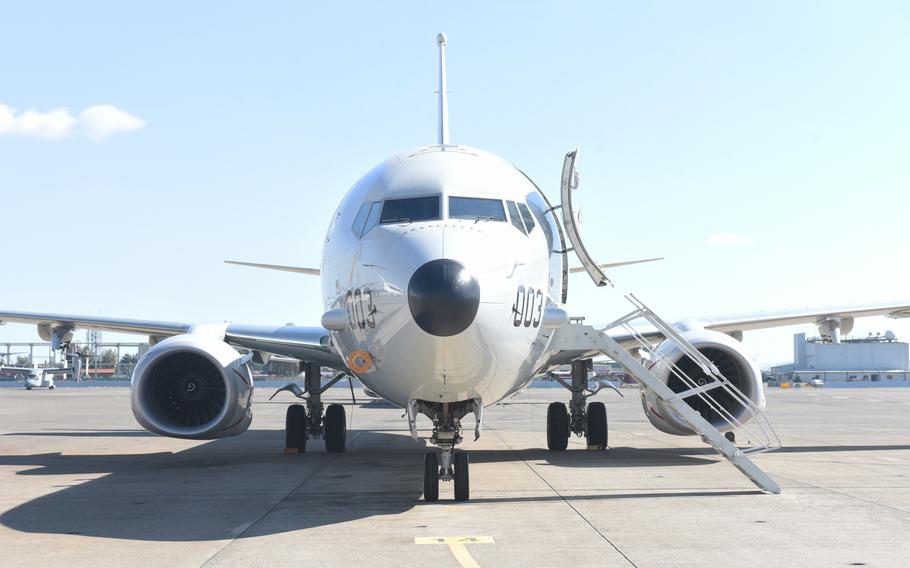 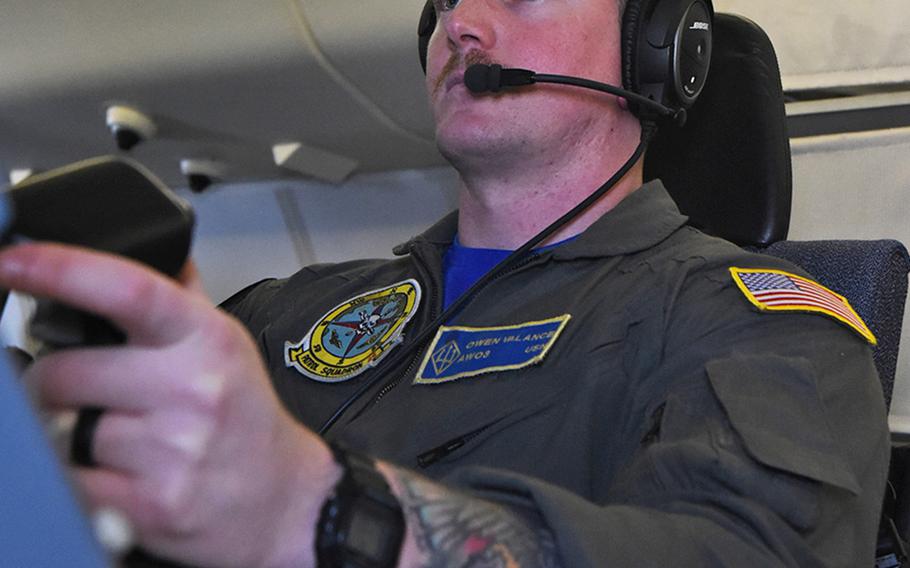 SIGONELLA, Sicily — The P-8A Poseidon crew spotted a submarine periscope, possibly Russian, poking up from the waves of the Mediterranean Sea.

They were told to fly onward — another mission took priority.

The Navy aircrew was on its way to a simulated submarine hunt, part of the 11-day exercise Dynamic Manta that ended earlier this month, and there was little room to deviate from the plan.

It’s not unusual for forward deployed P-8A squadrons to discover Russian subs — it’s part of their daily flight duties to track Russian maneuvers in European waters, which have increased in recent years after a two-decade lull following the Cold War.

“Certainly, in the past decade we’ve observed an increase in Russian submarine activity in the North Atlantic and Mediterranean Sea,” said Rear Adm. Andrew Lennon, commander of NATO’s submarines, while on a Dutch frigate during Dynamic Manta. “They’ve developed some very quiet and very capable submarines.”

A low-flying Poseidon roared overhead, interrupting Lennon. These planes, which first deployed to Europe six years ago, are vital in anti-submarine warfare because they can detect enemy boats and provide aerial defense of allied ships, he said.

One benefit of NATO exercises helping partner nations learn to work together across the alliance is that one military tracking a hostile submarine can pass the track on to an ally before heading home, said Lt. Luke Moragne, mission commander of the P-8A’s sub-tracking drill during Dynamic Manta.

Still, daily missions offer realistic training the crews can’t get during an exercise, he said.

“There’s nothing like being on top of an actual submarine,” Moragne said.

Sub-killer base Anti-submarine operations have been part of Naval Air Station Sigonella’s operations since the 1960s, when the Soviets began sending submarines into the Mediterranean.

Russian submarine deployments tapered off in the 1990s after the fall of the Soviet Union, as Moscow struggled to fund its military and suffered embarrassing setbacks such as the August 2000 sinking of the nuclear-powered cruise-missile submarine Kursk.

Russia has grown more militarily assertive in recent years, sending out ships, subs and aircraft to trail its rivals in the region. And last December, Russian subs were involved for the first time in combat operations in Syria, when they fired volleys of cruise missiles at rebel targets.

Since Moscow’s 2014 annexation of Ukraine’s Crimean Peninsula, the U.S. has been stepping up its efforts to counter its Cold War enemy.

Three years ago, the Navy deployed its first P-8As — modified twin-jet Boeing 737s — to this base in Sicily to replace aging P-3C Orions. The installation now operates seven of the aircraft, making it the Poseidon hub for Europe.

Run by nine-person crews, the sub-hunting planes are outfitted with high-tech sensors, communications systems and radars that can detect ships hundreds of miles away or pinpoint a periscope hundreds of feet below on the ocean’s surface.

“It’s like seeing a straw in the middle of the water — it’s difficult,” said Lt. Mason Bailey, a P-8A pilot and flight commander. “But something in a wake … you can see it.”

During the anti-submarine exercise, Bailey’s P-8A flew southeast of Sicily to meet a NATO submarine the crew was assigned to hunt.

Five crew members sat shoulder-to-shoulder in front of a bank of electronic screens, with mission commander Moragne at the center. They monitored radar, GPS, cameras, ocean conditions and radio transmissions from ships, planes and an array of sonobuoys.

The aircraft are equipped with 129 of the small floating devices, which are dropped into the water and transmit sonar data back to the plane to help track underwater targets.

With the help of computers that fuse the various data into a coherent picture that can be passed to friendly ships and planes, Moragne helped plot the aircraft’s course and follow the subsurface quarry.

The modified jetliners can also jam enemy signals and carry a host of weapons, including anti-ship missiles, torpedoes, bombs, depth charges and mines.

On the hunt Though able to soar as high as 30,000 feet and drop as low as 200 feet above the water, the P-8A’s size puts it among the least maneuverable aircraft in the Navy, said Bailey, the flight commander.

Still, flying them comes with a couple advantages over piloting fighter jets, he said, including more flight time and deployments on land instead of aircraft carriers.

“I can talk to my wife every night,” Bailey said during the simulated submarine hunt, which required a five-hour flight.

A few minutes later, the plane swooped to 400 feet. Everyone on board donned life preservers, as required when dropping below 1,000 feet.

The planes can fly up to 4,000 miles without refueling, enabling crews from Sigonella to watch over the Black Sea, Mediterranean and parts of the Atlantic Ocean.

The Navy also developed a way to top off their tanks in flight. A P-8A performed its first midair refueling over the Mediterranean in October.

Because the aircraft burn more fuel at lower altitudes, their travel distance depends on how often they dip low.

To conserve fuel and make the planes harder to detect, Boeing is developing a kit for attaching wings to the Poseidon’s anti-submarine torpedoes, turning them into glide bombs that can be released as high as 30,000 feet — much higher than the current version.

‘The most awesome’ job in the Navy From 400 feet, the plane rose to 1,500 feet, then dove again to 400 feet. Loud bangs reverberated as a crew member launched sonobuoys from a pneumatic ejector.

A submarine is first tracked when it leaves port or surfaces at sea. A P-8A flies out to where the sub is expected to be, based on its trajectory, and drops a pattern of sonobuoys, said Moragne, the mission commander.

The components of the devices separate on impact with the water. An antenna floats on the surface while a listening device sinks to a prescribed depth and transmits what it hears back to the plane.

If a submarine is detected, the plane follows it until air command tells the crew to quit, Moragne said.

The buoys are stored like wine bottles in racks. Petty Officer 1st Class Jeffrey Graham pulled some sonobuoys from the rack and ejected them from the launcher with a sharp thwack.

Each buoy’s depth and radio frequency is typically preset, but Graham can adjust the settings later at the mission commander’s request.

Graham opted for anti-submarine warfare in 2005 because he heard it was “the most awesome” Navy job, but his first years in the field were during the height of America’s wars in the Middle East, so he spent much of his time in aerial reconnaissance searching for desert targets.

With Russia and China becoming more active underwater and the U.S. military shifting its focus to monitor them, Graham is now doing what he signed up for.

“It’s exciting,” he said. “There’s something new every day.”