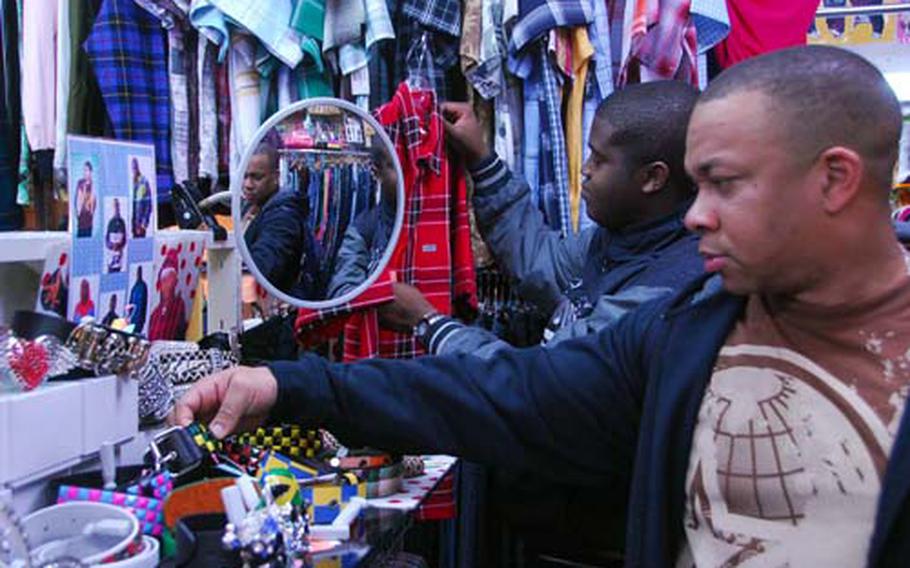 SASEBO NAVAL BASE, Japan &#8212; A visit by thousands of eager consumers would seem like a blessing for a city suffering hard economic times.

The equation is not so simple in Sasebo.

It was just one example of the $1 million in spending the U.S. Navy says a carrier visit contributes each day to the local Japanese economy.

Overall, the U.S. military pumps about $4.3 billion into Japan&#8217;s economy annually, which includes consumer spending, according to U.S. Forces Japan.

It is a significant income for a country that is hemorrhaging jobs and watching its economy sink to its lowest levels in many decades.

Still, questions remain in Sasebo &#8212; and other host communities &#8212; over the economic benefits of the U.S. military in a time of recession.

Some Sasebo residents were hopeful the carrier visit can inject much-needed cash into the city, while others remain pessimistic that much will get into local pockets.

City Councilman Yosei Matsumoto is one of the optimists.

In recent months, Sasebo has seen the bankruptcy of its second-largest industrial company, Tsuji Heavy Industries, and a decline in tourism that caused the closure of a top hotel, Den Haag at the Huis Ten Bosch resort, Matsumoto said.

Meanwhile, small businesses, such as restaurants and car dealerships, are suffering. But Matsumoto said the military in Sasebo can bolster business during the recession.

The Sasebo bicycle racing stadium was being pinched by the diving economy. So, Matsumoto teamed up with the stadium to promote the weekend race events to USS Stennis sailors.

Hundreds of English-language flyers were distributed as the carrier came into port. Matsumoto said he hopes the carrier will help fill stadium seats over the weekend and that sailors will continue to come to the bicycle races after the Stennis leaves port.

"I think the U.S. Navy is a big help" to the local economy, Matsumoto said.

Masato Shinozaki, a Sasebo peace activist and opponent of the U.S. military in Japan, said very little money is made from consumer spending by the U.S. military. Sailors typically take their money out of the city, spending it during trips to Nagasaki or Fukuoka, which provide more entertainment and nightlife, he said.

Even the number of local "gaijin" bars &#8212; a main attraction for sailors in the city &#8212; has greatly decreased in Sasebo since the Vietnam era, meaning less revenue for the local economy, Shinozaki said.

The military&#8217;s economic contribution in Sasebo is one of the smallest among bases in Japan, according to figures U.S. Forces Japan provided Friday.

During just one weekend visit by the USS Stennis, the city will get about $4 million to $5 million, according to U.S. Navy revenue estimates.

"It behooves all of us to think of the goodness &#8230; from something like an aircraft carrier, whether it&#8217;s a port visit here in Sasebo or a permanent basing with the fleet in a community," Rear Adm. James D. Kelly, commander of U.S. Naval Forces Japan, said Thursday.

Meanwhile, the U.S. military on Okinawa is by the far the biggest economic contributor. Bases there generate about $2 billion annually, USFJ reported.

"From October to January, business had been very bad, but fortunately it started picking up after February," he said. "While Japanese consumers were holding off in buying, shopping behavior of Americans was unchanged, steadily contributing to our business."

Consumer spending has been mixed elsewhere.

In a popular shopping and entertainment area outside Yokosuka Naval Base, south of Tokyo, Benjamin Okide, owner of Vegas Fashion, says fewer customers have been walking through the doors than in past years.

"I think it&#8217;s affecting everybody," Okide said. "But we still see more Japanese than U.S. customers now, probably because of the exchange rate."

The unfavorable dollar-yen exchange rate also was smothering spending in the local economy outside Yokota Air Base, in the outskirts of the greater Tokyo area.

"I try not to take out yen or use yen much anymore," said Senior Airman Amy Reimer, 374th Surgical Operations Squadron, who said that going out to eat is her main off-base expense.

The yen rate &#8212; and a port visit to Hong Kong the previous week &#8212; appeared to be making USS Stennis sailors skittish about spending money in Japan, according to Morale, Welfare and Recreation.

During a visit by the carrier USS Ronald Reagan one year ago, a record high of about 1,000 people per day were going on MWR tours of Japan, including the local area and nearby cities, MWR director Scott Poluhowich said.

"The number of tours we have going [this weekend] is down from the high of the Reagan. We are not going to see but a fraction of that," Poluhowich said. "I think it is a combination of just coming from Hong Kong &#8212; where they spent a boatload of money &#8212; and the yen-to-dollar ratio."

For Sasebo to get its estimated $1 million per day of revenue, every sailor on the aircraft carrier must spend about $189 every day in port.

McLean might have rung up that much in his first few hours in the city.

However, he said, the stop in Hong Kong took a bite out of his wallet and he probably wouldn&#8217;t spend much more money after his clothing purchase Friday.

"We are going to chill out this time," McLean said.