Port call in Australia? Time to hit the books 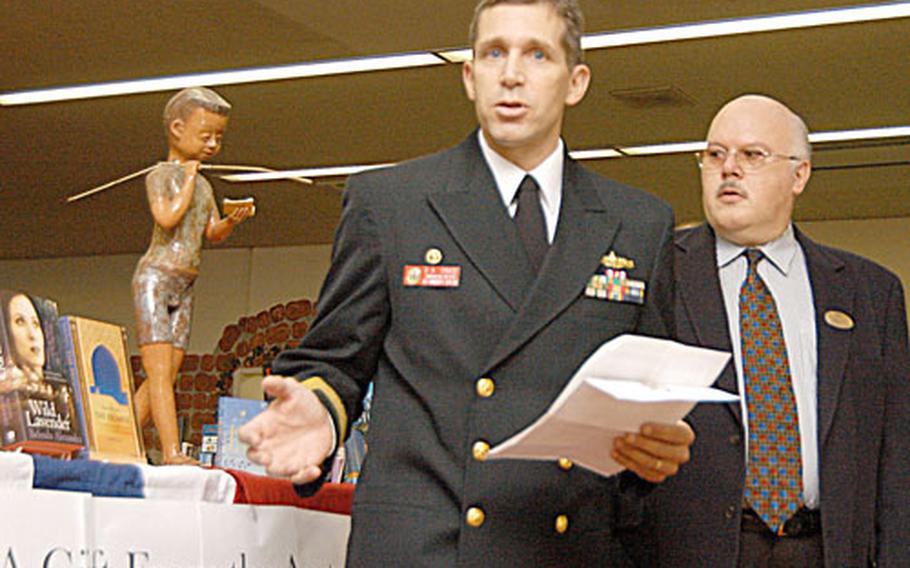 YOKOSUKA NAVAL BASE, Japan &#8212; Port calls in Australia always are a thrill, no matter how long you&#8217;ve been in the U.S. Navy, says Cmdr. David Chase, USS Vandegrift commanding officer.

Sailors often want to know more about the continent, he said. So Chase, with the help of several Australians, decided to bring the Land Down Under underway.

&#8220;After witnessing firsthand our sailors&#8217; quest for more information, a smart and ambitious Australian author named Felicia Starr sought to fill this void,&#8221; Chase said. &#8220;She wanted to give visiting U.S. servicemen and women the opportunity to get to know Australia through books written by Australian authors.&#8221;

Called &#8220;Aussie Books On Board,&#8221; the program ensures every American ship that visits Sydney will leave with a batch of new books for the ship&#8217;s library. Chase delivered an introductory shipment of books to kick off the program &#8212; about 60 &#8212; to Yokosuka Naval Base&#8217;s library last week.

Yokosuka&#8217;s Supervisory Librarian Kevin Jones recognized a couple of authors, including Colleen McCullough, the author of the 1977 bestseller &#8220;The Thorn Birds.&#8221;

The project is run through the Australian-American Association, an organization whose focus has been on fostering friendship between the two countries since the 1930s. Most U.S. sailors know the group&#8217;s members as the people &#8220;who roll out the welcome mat&#8221; when the Navy ships pull into port, Chase said.

They also had help from a number of others, including Stephen Smith, the U.S. consul general to Sydney, Chase said.

Petty Officer 3rd Class Jeff Stillman has been to Australia but hadn&#8217;t read much about it before, he said, thumbing through the books Tuesday.

And though you can&#8217;t judge a book by its cover, Petty Officer 2nd Class John Lawson said some of the books appear to have just what he&#8217;s looking for.