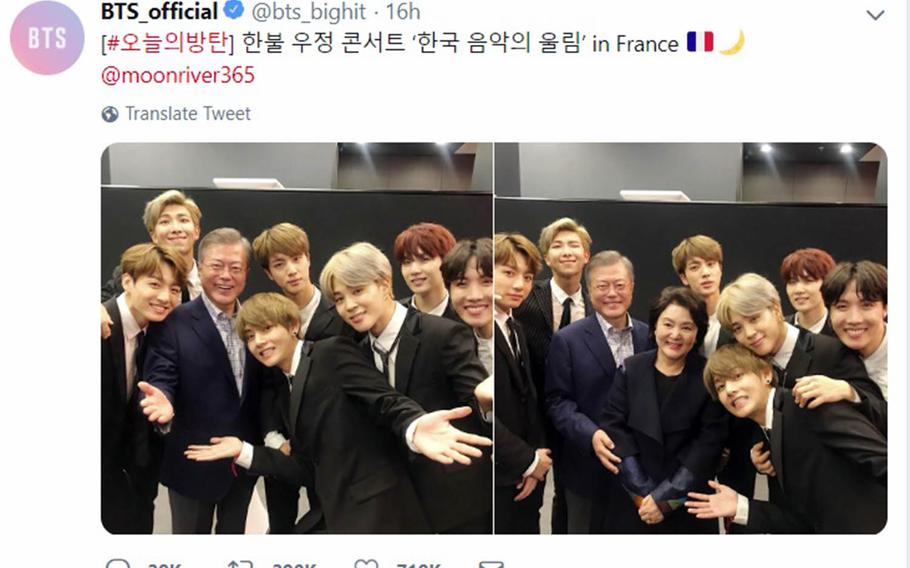 Members of the boy band BTS pose with South Korean President Moon Jae-in and his wife, Kim Jung-sook, in photos posted to the group's official Twitter account. (Screenshot from Twitter)

Members of the boy band BTS pose with South Korean President Moon Jae-in and his wife, Kim Jung-sook, in photos posted to the group's official Twitter account. (Screenshot from Twitter) Like all South Korean men, members of the chart-topping septet BTS are subject to compulsory military service. (Courtesy of Big Hit Entertainment)

SEOUL, South Korea — BTS fans call themselves an ARMY, but that doesn’t mean they want the globally popular boy band to join one.

Like all South Korean men, members of the chart-topping septet are subject to compulsory military service and will likely be called to duty relatively soon since they’re all in their early to mid-20s.

The group’s popularity has fueled a debate over whether the list of exemptions for conscription enjoyed by Olympic medalists and some other athletes and artists should be expanded to include K-pop sensations like BTS.

South Korea’s culture minister appeared to put an end to that idea last week, saying that BTS had committed to enlisting, although no timeline was given.

“The seven members of BTS say they’ll definitely enlist for military service,” Do Jong-hwan, the minister of culture, sports and tourism, said in response to a question during a parliamentary audit.

Do criticized what he called media reports that members of the group may seek an exemption, an extremely sensitive issue in South Korea as other celebrities have been snared in past draft-dodging scandals. “In fact, they intend to do the exact opposite,” he told lawmakers on Oct. 10.

BTS, which was formed in 2013, gained a loyal following around the world as it soared to popularity while performing most of its songs in Korean. In May, it became the first K-pop group to top one of the main Billboard charts with its third studio album “Love Yourself: Tear,” prompting congratulations from South Korean President Moon Jae-in.

The group also got a nod from South Korean rapper PSY, whose smash hit “Gangnam Style” peaked at No. 2 on a Billboard chart in 2012. BTS is so influential that it addressed world leaders at the U.N. General Assembly last month to launch a new youth initiative.

But the members of BTS — also known as the Bangtan Boys or Bulletproof Boy Scouts — may have to trade their stylish costumes and choreographed dance moves for military uniforms and drills in coming years.

South Korea requires all able-bodied men ages 18 to 35 to serve nearly two years of military service due to the threat from the North as the two countries remain technically at war after their 1950-53 conflict ended in an armistice instead of a peace treaty.

The law exempts athletes who win medals at the Olympics or the Asian Games as well as the winners of several prestigious international classical and traditional music and arts competitions, according to the Yonhap News Agency. A recent revision also lowered the maximum age for delaying enlistment from 30 to 28.

The issue came to the fore in July when Ha Tae-kyung, a member of a minor opposition party, said the law doesn’t reflect reality.

“The general public, including young people, wonder what makes winning on the Billboard chart different from winning in other international competitions,” he was quoted as saying. “Winning the former is likely to create bigger added value, but popular culture isn’t on the list.”

Several online petitions calling for BTS to be exempt have been filed on the presidential website, but the general debate on the issue has focused more on demands for exemptions to be lifted altogether to ensure equity or for the end to overall conscription.

In a sign of the potential for backlash, a petition calling for the group to be disbanded was filed on the presidential website on Sept. 25.

Supporters are quick to point out that neither the group nor its agency Big Hit Entertainment is known to have asked for an exemption.

“If it’s a place where they have to go, they will go & all we gotta do is wait for them meanwhile,” one fan said in a tweet with the hashtag #BTSxARMY.