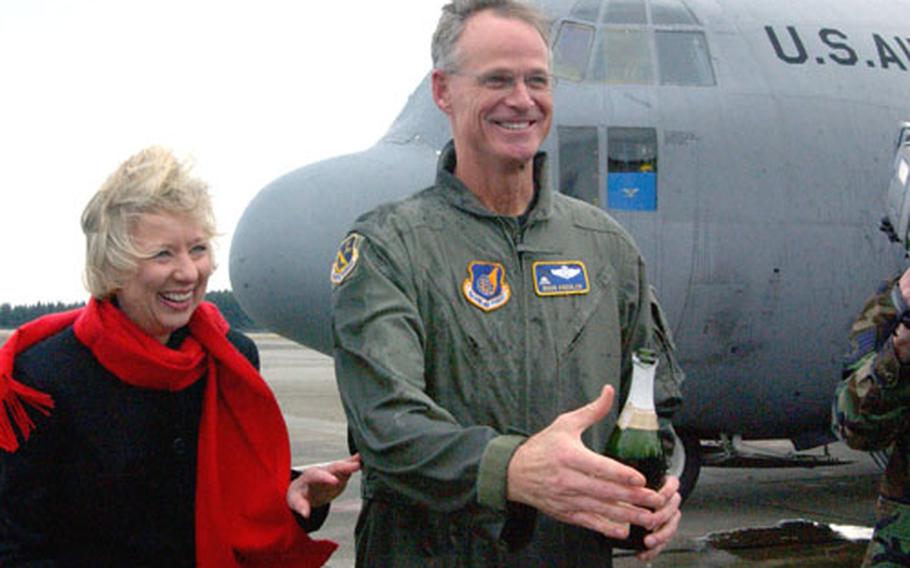 Col. Doug Kreulen, the 374th Airlift Wing vice commander, is joined by wife, Susan, following his ceremonial final flight Tuesday at Yokota Air Base, Japan. Kreulen leaves Yokota next week for the Air Force Academy, where he will become the director of staff. (Kaori Matsukasa / Courtesy of U.S. Air Force)

Col. Doug Kreulen has been named director of staff at the Air Force Academy in Colorado Springs, Colo. His last day at Yokota is Wednesday.

Kreulen, who became wing vice commander in July 2004, conducted his ceremonial final flights in both the UH-1N helicopter and the C-130 on Tuesday. Tama Hills Golf Course hosted a tournament in his honor Thursday morning, and a farewell dinner was planned at the Yokota Enlisted Club.

Considered a popular and respected figure within the Yokota hierarchy, Kreulen said he wants to be remembered as &#8220;a leader that cared more about doing the right thing than taking the easy road.&#8221;

&#8220;I hope some folks will also remember my sense of humor and the towering home run I hit against the chiefs,&#8221; he added, referring to a friendly softball game between the base&#8217;s colonels and chief master sergeants.

Last January, he briefly became the 374th Airlift Wing commander when Col. Mark Schissler, then the base&#8217;s top leader, and about 250 other Yokota airmen were dispatched to South Asia for tsunami-relief missions as part of the U.S. military&#8217;s Operation Unified Assistance.

&#8220;My tour as the vice commander has been an enjoyable and professionally rewarding experience,&#8221; Kreulen said. &#8220;I will miss the people that I&#8217;ve had the opportunity to serve with, especially my Japanese counterparts and friends.

&#8220;I have never lived anywhere else in the world where the local citizens have been more gracious, kind and friendly. I will treasure my memories of Japan and I hope to reciprocate the same hospitality when my Japanese friends visit the United States.&#8221;

His successor will be Col. Paul J. Montgomery, now the 317th Airlift Group commander at Dyess Air Force Base, Texas. Montgomery is expected to arrive at Yokota in mid-January, base officials said.