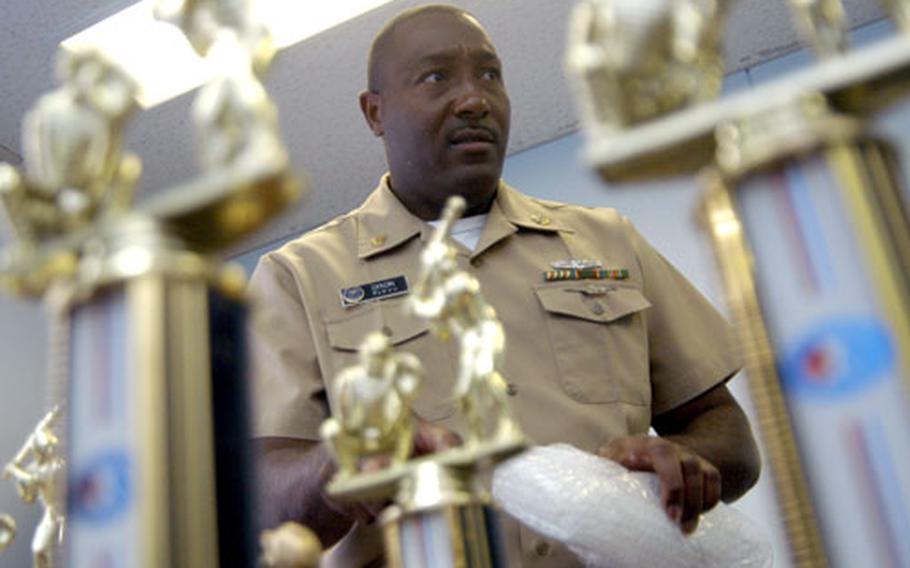 Chief Petty Officer James Dixon unwraps the special, custom-made trophies he ordered for one of the many MWR Youth Athletic teams he coaches. In 11 years at Yokosuka Naval Base, Dixon has been a volunteer coach in five different sports for over 300 kids. (Allison Batdorff / S&S)

It started with a teenage love affair with baseball. Then it spread to other sports &#8212; even sports the now-chief petty officer never played before, such as soccer, he said.

After 11 years at Yokosuka Naval Base, Dixon will be transferred to Norfolk, Va., this July.

In those 11 years, Dixon has coached more than 300 kids ages 5 to 15 at Yokosuka Naval Base in five sports &#8212; baseball, basketball, soccer, flag football and softball, according to Morale, Welfare and Recreation Youth Sports Director Isaiah Mincks. The way the seasons run, that means Dixon has coached pretty much nonstop since he arrived in Yokosuka.

Dixon coached via e-mail while at sea. He coached when MWR added a summer basketball league last year, even though he was hoping for a break.

Dixon says he doesn&#8217;t really have one &#8212; beyond emphasizing teamwork and sportsmanship, he said.

But parents and kids paint a different picture, Mincks said. Coach Dixon makes you work hard, but he cares about the kids and they know it, Mincks said.

&#8220;Coach&#8221; also goes out of his way to encourage kids. The family&#8217;s disposable income goes to custom-made, individualized trophies and lunches for the kids who forget money at away games, jokes Dixon&#8217;s wife, Merle. He puts the kids&#8217; names on the uniforms and names the teams to build a stronger team identity. This year, the baseball team was &#8220;The Braves.&#8221;

During baseball season, one of Dixon&#8217;s players comes home from each game with the &#8220;game ball&#8221; for a great play or good sportsmanship.

Dixon says the extra effort is his way of thanking the kids &#8220;for putting up&#8221; with him, sticking with the program and doing their best.

Last week, Dixon was on the receiving end of an MWR award and a letter of appreciation ahead of his transfer next month.

But coaching is a hard habit to break and Dixon likely will volunteer at his new duty station, he said.