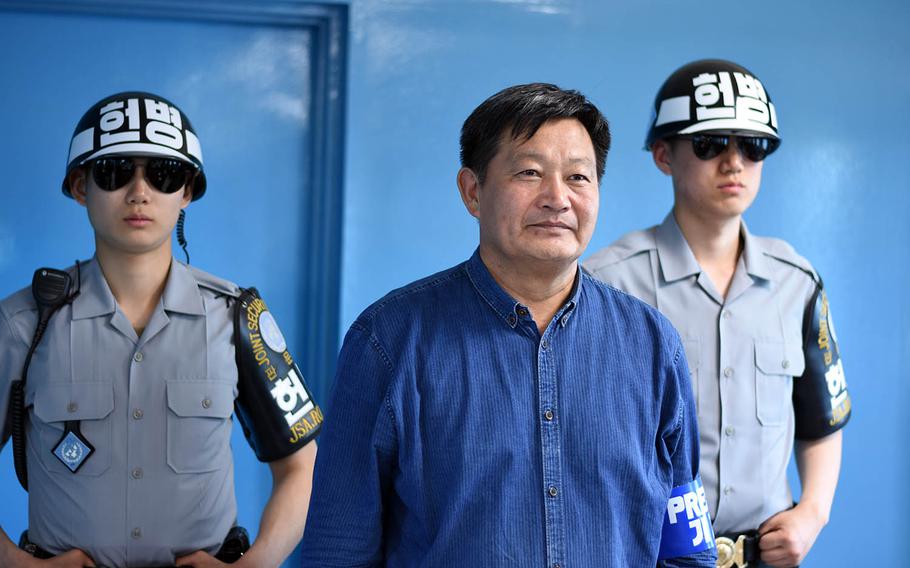 A man poses near South Korean soldiers inside a conference building at the Joint Security Area on the border of North and South Korea, May 24, 2017. (Aaron Kidd/Stars and Stripes)

A man poses near South Korean soldiers inside a conference building at the Joint Security Area on the border of North and South Korea, May 24, 2017. (Aaron Kidd/Stars and Stripes) 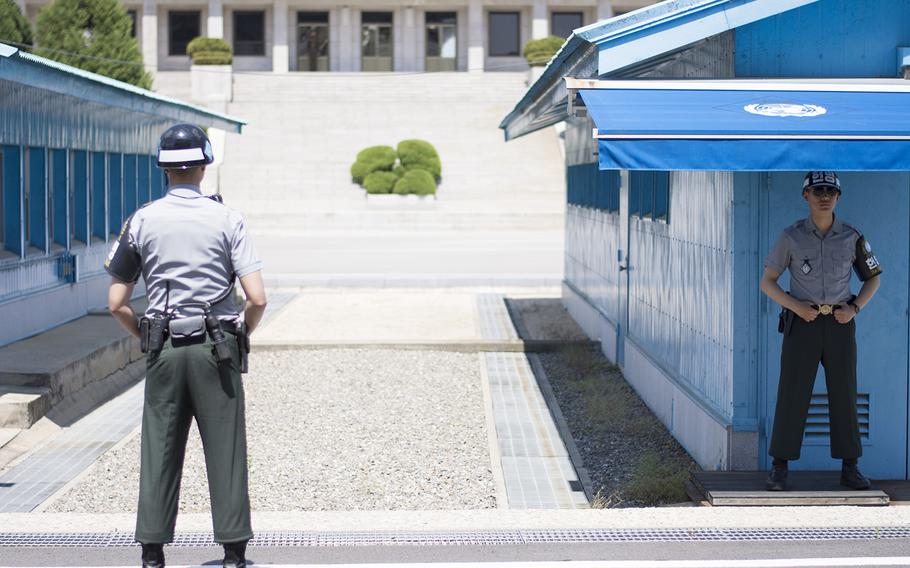 South Korean soldiers stand guard at the Joint Security Area on the border of the two Koreas, May 24, 2017. (Aaron Kidd/Stars and Stripes)

SEOUL, South Korea — Tours to the Korean truce village of Panmunjom have been suspended while authorities await guidance on new arrangements to comply with a far-reaching military agreement.

Agencies notified tourists last week and offered refunds for those who had prepaid for a visit to the tightly controlled Joint Security Area, the heart of the heavily fortified border that sits about 35 miles north of Seoul.

The tours to the JSA — the only point along the 155-mile long border where North and South Korean troops face each other — are popular with foreign tourists eager for a glimpse of the communist state.

The U.S.-led United Nations Command, which administers the southern side of the jointly patrolled area, confirmed the tours have been postponed. The command’s military armistice commission was “looking into dates when they can resume,” it said.

“There will be no crossings until the State Department has created and coordinated guidance for the crossings,” a UNC official said in an email Tuesday, discussing the issue on condition of anonymity.

The military armistice commission anticipates that crossings will be very controlled at first with name accountability and a head count, the official said while stressing that guidance will come from the State Department.

Visitors have long been allowed into only certain parts of the area — including the blue conference building where the armistice that ended the 1950-53 Korean War was signed — as part of tightly controlled tour groups led by authorized agencies.

But the inter-Korean military agreement reached last month called for the JSA to be disarmed and for civilians to be allowed in the area with “freedom of movement” from 9 a.m. to 5 p.m.

The two Koreas, backed by the UNC, announced last week that they had completed the withdrawal of firearms and military posts from the area as part of the agreement, which is aimed at reducing tensions amid diplomatic efforts to persuade the North to give up its nuclear weapons.

The UNC — which is led by Gen. Vincent Brooks, who also commands U.S. Forces Korea — announced Monday that the work done to date had been verified.

It also said a third meeting planned for Tuesday between UNC, North and South Korean officials to discuss further implementation of the military agreement had been postponed.

“The trilateral talk will be rescheduled and is being coordinated between” the three parties, according to a press release.

The website NK News quoted travel industry sources as saying that North Korean authorities expect tourists visiting the JSA on its side to be able to freely cross the Military Demarcation Line as early as Thursday. It said the news was reportedly relayed by the Korean International Tourism Company.

In addition to the UNC statement, South Korea’s defense ministry said discussions are ongoing and no definite date has been fixed for the JSA border crossings to begin.

“The issue related to the free traffic or sightseeing is a matter in need of review and consultation,” ministry spokesman Lee Jin-woo told reporters Monday.

It’s also not clear how the changes may affect Americans who face a travel ban imposed after the death last year of Otto Warmbier, a University of Virginia student who fell into a coma while detained in the North.

Currently, Americans can step into the North while in the building where the armistice was signed, a popular feature of the tours. But the military agreement suggests tourists would be allowed deeper into the North Korean side of the area.

Representatives of several South Korean tour agencies said the JSA tours have not been allowed since Oct. 25, when the UNC informed them to be on standby as the area was temporarily closed.

One employee reached on the phone declined to be interviewed, saying he was too busy processing refunds for visitors who had prepaid for upcoming JSA tours, which have required advance notice to provide time for approval from the U.N. security battalion.

The JSA tours are usually combined with visits to other sites such as an observation tower and an old North Korean infiltration tunnel near the Demilitarized Zone, a 2.5-mile wide no man’s land that bisects the peninsula largely along the 38th Parallel. Those tours have not been affected.