Popular as Christmas gifts, drones can face tight rules on base 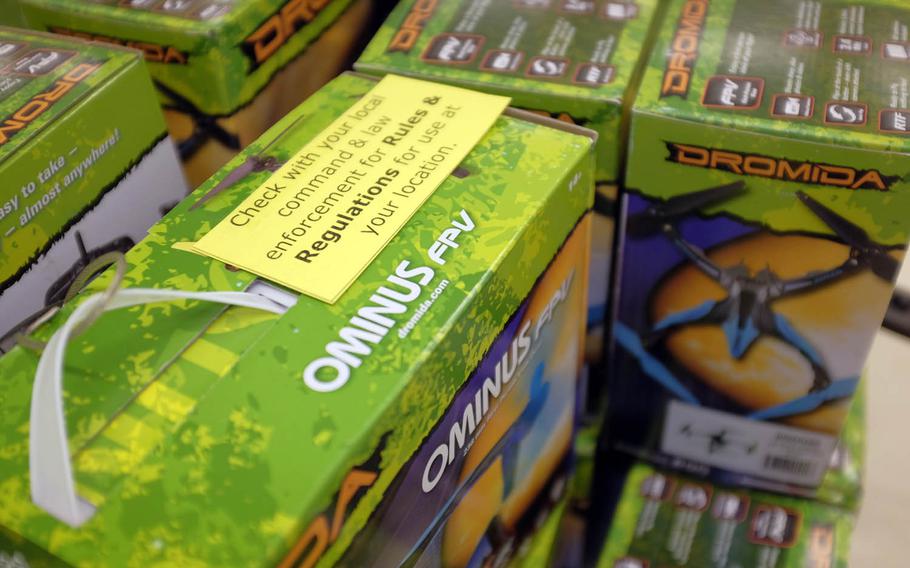 Recreational drones are a hot item at base exchanges this Christmas, but shoppers are being urged to check rules in their community before flying them. (James Kimber/Stars and Stripes)

YOKOTA AIR BASE, Japan — Recreational drones are a hot item at base exchanges this Christmas, but shoppers are being urged to check rules in their community before flying them.

The Consumer Electronics Association expects U.S. drone sales to approach 700,000 this year. At the same time, the Federal Aviation Administration has noted a surge in close calls involving drones and manned aircraft with nearly 700 incidents in 2015, according to an article posted on the Yokota Air Base website.

At Yokota — headquarters of U.S. Forces Japan in Tokyo — the Army and Air Force Exchange Service is selling two brands of drone quadcopter.

Christmas shoppers could have snapped up a quadcopter that was discounted from $699 to $399 at a Black Friday sale. Since then, the store has sold 12 of another model priced at $149.95, Keen said.

However, a notice posted alongside a display of drones at the store advises customers to check with their installation to find out base-specific rules before flying them.

At Yokota, that means remotely piloted aircraft can only be flown in two locations — at the sports fields on the west side of the base for toy battery-powered drones and a taxiway on the east side for larger recreational drones, 374th Airlift Wing commander Col. Douglas DeLaMater said in a policy that was posted last Friday.

“[Remotely piloted aircraft] use outside these areas is not permitted without the approval of the installation commander or designee,” the policy states.

Drones using video recording equipment or video-piloted aircraft are not allowed to fly over the base. Drone operators with video equipment must disable it before flying, according to the policy. Sport/hobby drones, including all multirotor aircraft, must be registered with Yokota’s security forces before they can be flown, and children younger than 13 must be supervised by an adult when flying a drone.

Authorities all over the world are grappling with advances in drone technology, DeLaMater said.

“It’s a safety concern,” he said, noting that a C-130 aircraft narrowly averted disaster after it was struck by a drone in 2011.

In the incident, an unmanned 375-pound RQ-7B Shadow struck the Hercules in eastern Afghanistan. The crash destroyed the drone and forced the smoking C-130 to land immediately with jet fuel pouring out of a gash in its wing, the Washington Post reported.

“The drones for sale in the BX are orders of magnitude smaller,” DeLaMater said.