Pooches get extra attention as Year of the Dog dawns 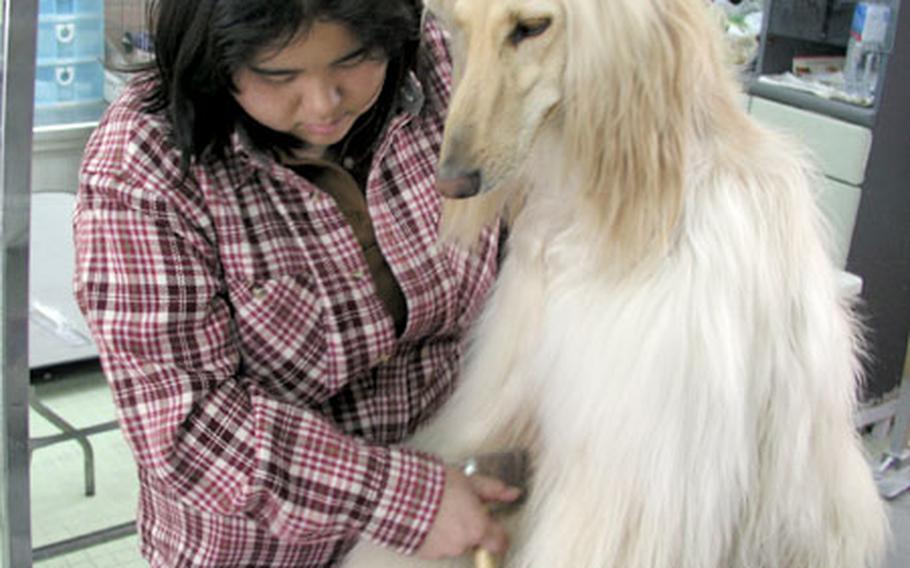 That means it&#8217;s time again for pooches to win extra attention throughout Japan. From olden times, people in Japan, China and Korea have honored the animal that is designated for the year. To welcome 2006, many dog owners are taking special steps to ensure their canine friends are ready for their year in the spotlight.

At a pet shop in Okinawa City recently, Nancy, a 4-year-old Afghan wolfhound, was getting the full spa treatment from Miyuki Taba. It takes about two hours for Nancy to get the total beauty package, said Taba, her beautician since puppyhood.

The shop, near the Plaza Shopping Center and Camp Foster and one of the oldest dog-grooming businesses on Okinawa, averages about 130 dogs a month, Taba said.

To make a fresh start for a brand new year, many dog owners want their dogs to be bathed and groomed, she said.

Some dog owners plan to celebrate the start of their best friends&#8217; year in a bit more vigorous way. At Desaki Beach in Tamano, in Okayama prefecture, about 125 miles northeast of Marine Corps Air Station Iwakuni on southern Honshu, dogs and their owners plan to go for a swim on New Year&#8217;s Day.

The beach, Japan&#8217;s first and only dog beach, will be open to all dogs and their human companions on the first day of the year for swimming and flying kites, both traditional human activities on New Year&#8217;s Day in Japan, said Atsushi Nagao, assistant director of Taiyo Shokusan, the company that manages the beach.

Although admission to the beach is free on New Year&#8217;s Day, there is one requirement, Nagao said.

Hideki Kita, owner of three border collies, is among the people who plan to hit the beach on Sunday. But he said he was unsure whether his dog Sakura would take to the cold water.

Are you a dog?

Those who observe the 12-year Chinese zodiac believe that people take the traits of the animal of their birth year.