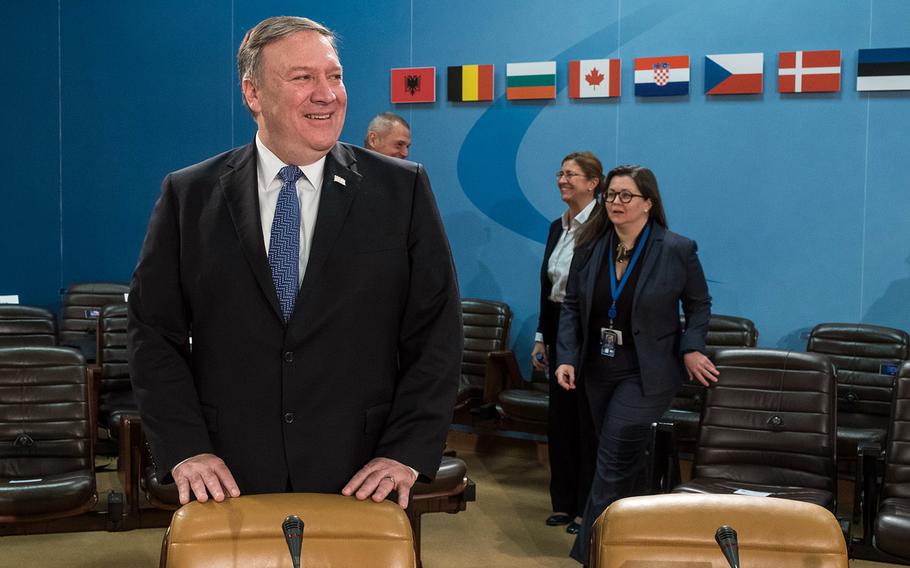 U.S. Secretary of State Mike Pompeo before the start of the foreign ministers meeting at NATO headquarters in Brussels on Friday, April 27, 2018. (Courtesy of NATO)

U.S. Secretary of State Mike Pompeo before the start of the foreign ministers meeting at NATO headquarters in Brussels on Friday, April 27, 2018. (Courtesy of NATO) 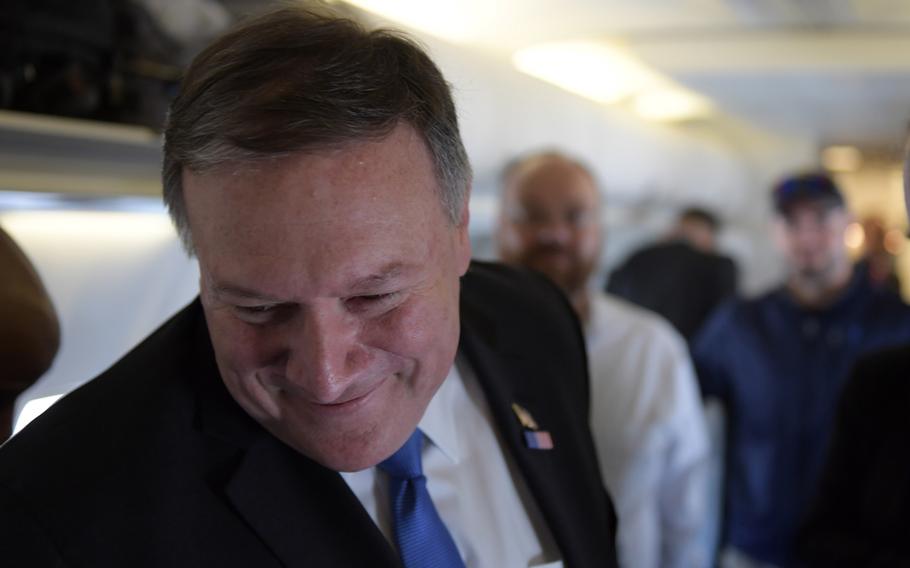 Mike Pompeo, newly confirmed U.S. Secretary of State, boards his aircraft and meets his staff as they prepare for his first official trip as Secretary of State on Thursday, April 26, 2018. Pompeo is in Brussels for NATO meetings on Friday. He then travels to Saudi Arabia, Israel and Jordan. (Courtesy of State Department) 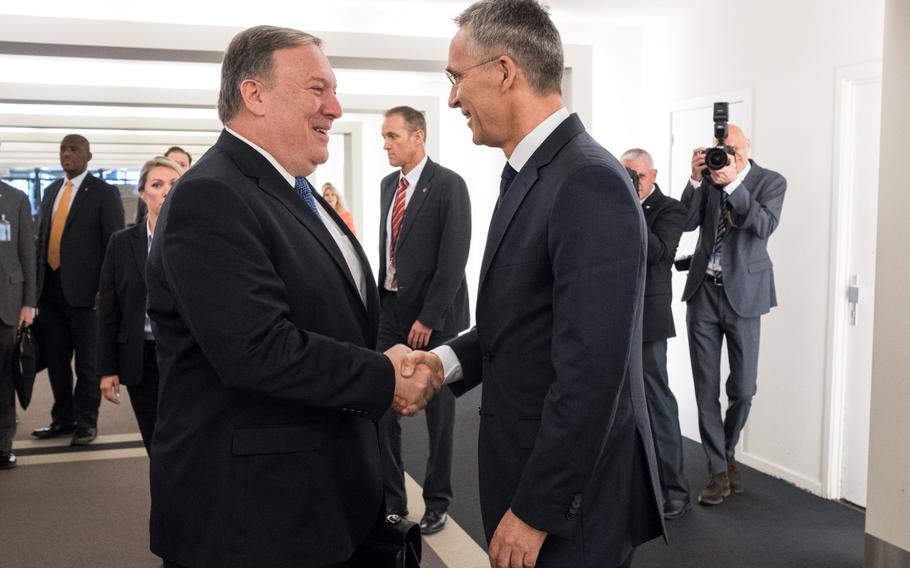 Newly confirmed Secretary of State Mike Pompeo arrived Friday at NATO headquarters in Brussels on his first foreign visit to deliver a tough message to key ally Germany over its failure to boost defense spending.

Pompeo, who dashed off to Brussels after being confirmed by the Senate late Thursday, convened with allies over concerns about Russian aggression, the crisis in Syria and terrorism.

But when it comes to Germany and its failure to meet NATO defense spending goals, Pompeo said Europe’s economic powerhouse must do more.

“They (Germany) should meet the goals that they agreed to,” Pompeo said at the end of talks Friday.

While the U.S. remains committed to defending allies, Pompeo said the security burden must not fall exclusively on the U.S.

But the need for more NATO military burden sharing — a point of intense focus for the Trump administration — was at the top of the U.S. agenda, a senior U.S. official said.

“We will underscore how important it is for all allies to take this threat seriously, to honor their commitment from the Wales Summit to spend 2 percent of (gross domestic product) and devote 20 percent of defense budgets to major equipment by 2024,” a senior State Department official told reporters ahead of the visit.

Currently, five countries in NATO meet spending benchmarks, but that number is expected to grow to eight this year. In all, 15 of 29 members are on track to reach NATO spending targets by 2024.

However, other members states — most notably Germany — have not drafted detailed plans to dedicate 2 percent of economic output to military matters.

During Friday’s talks, allies will work in preparation of a major NATO summit in July, which President Donald Trump is expected to attend.

They are expected to take additional steps to strengthen NATO’s ability to deter any potential Russian aggression. Locations for two new command and control headquarters are among the decisions to be made.

U.S. administrations have complained about security “free riders” in Europe for decades. The issue of defense spending, or lack of it, has dominated Trump’s views of the NATO alliance. He has sometimes suggested that American security guarantees hinge on whether spending targets are met.

Trump, who is meeting with German Chancellor Angela Merkel on Friday in Washington, is expected to again raise the issue of Berlin’s underinvestment in its military.

Germany now spends about 1.24 percent of GDP on defense.

German military officials have set off alarms about the country’s lack of military readiness. More than half of the military’s battle tanks are out of service, and no submarines are operational, despite a multibillion-dollar national budget surplus.

Lt. Col. Andre Wuestner, chairman of the German Armed Forces Association, said in an interview Thursday with Die Welt newspaper that the military needs a significant budget boost. He warned of “incalculable consequences for our security” if the government doesn’t act.

Still, German political leaders in favor of a stronger military have struggled to galvanize public support. More than 70 years after its crushing defeat in World War II, many Germans remain uneasy about the idea of a larger role for their country in military affairs.

A survey by the Pew Research Center found that 51 percent of people polled want defense spending to hold steady, while 13 percent want cuts. Only 32 percent want to increase spending.

“As the largest and wealthiest European member state, the example that Germany sets is a very powerful one, and the practical impact that it would have in strengthening European security if it fully lived up to its stated public commitments would be hard to overstate,” the senior State Department official said, speaking on condition of anonymity.

“The underlying theme in all these meetings is the centrality and importance of the NATO alliance for the United States, our allies, and regional and international security,” the State Department official said. “At no point since the end of the Cold War has NATO been more relevant than it is today.”