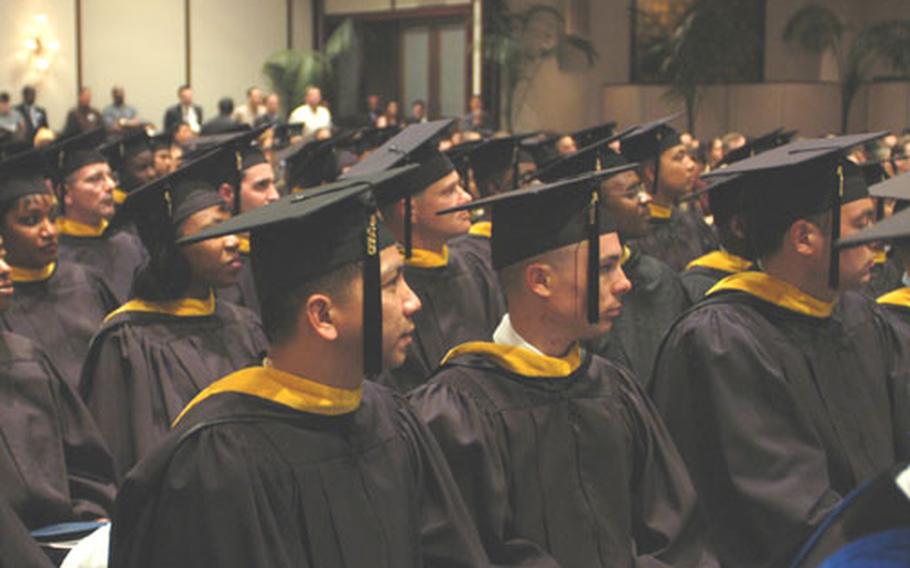 Graduates listen to Army Gen. Thomas G. Miller, commander of the US Army in Japan, during the University of Maryland University College 2003 commencement ceremony Saturday at the New Sanno Hotel in Tokyo. (Juliana Gittler / S&S)

Graduates listen to Army Gen. Thomas G. Miller, commander of the US Army in Japan, during the University of Maryland University College 2003 commencement ceremony Saturday at the New Sanno Hotel in Tokyo. (Juliana Gittler / S&S) 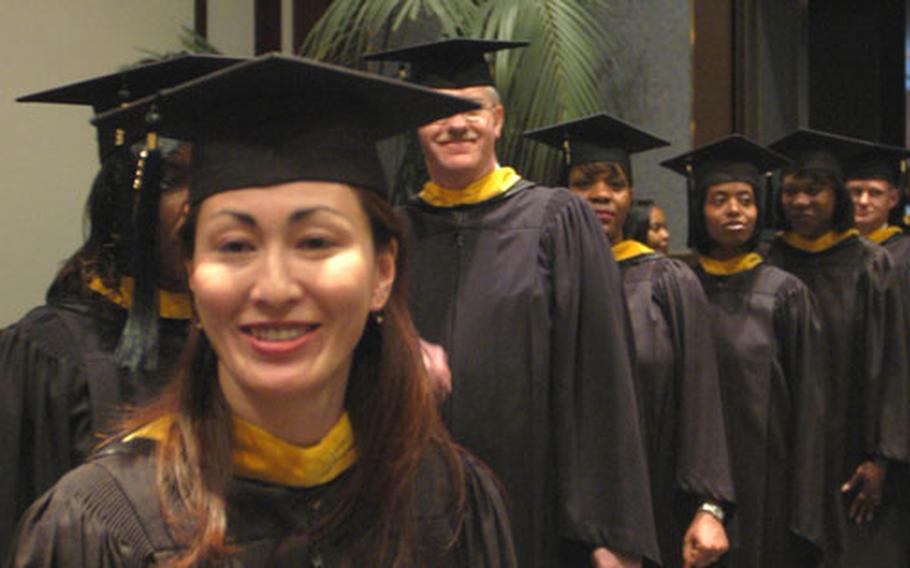 Graduates file in to the University of Maryland University College 2003 commencement ceremony Saturday at the New Sanno Hotel in Tokyo. (Juliana Gittler / S&S) 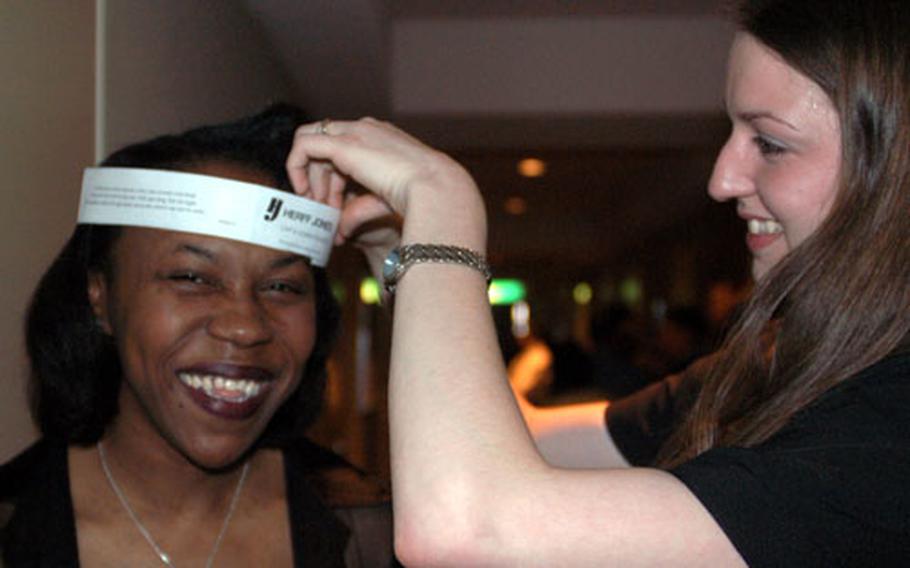 Graduate Paulette Ergus is fitted for her mortarboard before the University of Maryland University College 2003 commencement ceremony Saturday at the New Sanno Hotel in Tokyo. Ergus graduated along with her husband, Petty Officer 1st Class Paul Ergus. (Juliana Gittler / S&S)

Valencia Hall stood holding her daughter in one arm and a small round cardboard case in the other.

Both made her beam.

With friends, her husband and two children present, Hall joined more than 100 people Saturday to walk the stage at the University of Maryland University College&#8217;s 2003 commencement ceremony in Tokyo. The cardboard case represents the degree they will receive later in the mail.

Valencia, from Yokota Air Base, said the hardest part of completing her bachelor&#8217;s degree in business management was balancing family and studies. It was hard explaining to a 4-year-old and a 6-year-old why mommy can&#8217;t play.

Students studying with UMUC, the largest university working with the U.S. armed forces, are not like traditional college students, said Dr. Gerald A. Heeger, president of the college in Maryland.

During his commencement speech, Maj. Gen. Thomas G. Miller, commander of the U.S. Army in Japan, complimented the graduates for their strength and diligence for finishing college even during such uncertain times.

&#8220;That diligence is magnified when you consider all the obligations you have as servicemembers,&#8221; Miller said.

He encouraged the graduates to use their knowledge to be better citizens.

More than 950 UMUC students from the Pacific will graduate this year.

In caps and gowns, 110 people crossed the stage Saturday at Tokyo&#8217;s New Sanno Hotel. There are also commencements in Seoul and Okinawa this spring.

Graduates came from all four service branches and the Coast Guard, and included Japanese and Korean nationals, dependents and civilian Department of Defense employees.

Their average age is 34 &#8212; the youngest 20 and oldest 61; the average time taken to complete a degree was 13 years. The 2003 graduates took classes with UMUC on four continents and many islands.

One graduate, Paul Opera of Yokosuka Naval Base, received his master&#8217;s degree.

Another student began studying with UMUC nearly 30 years ago.

Paulette Ergus of Misawa finished her bachelor&#8217;s degree in psychology last year. But she waited to attend commencement with her husband, Petty Officer 1st Class Paul Ergus, who just completed his associate degree.

Paulette, who works as a field representative for UMUC in Misawa, said her parents encouraged her to go to college. She started years ago, but delayed finishing a degree to start a family.

For Paul Ergus, a Navy master-at-arms in Misawa, having his wife nudging him along made the difference.

Paulette plans to start a master&#8217;s program as soon as they get home. Paul is starting his bachelors.

With pride, many graduates and their families feel relief the work is over.