Poll shows strong Okinawa resistance to US base realignment plan 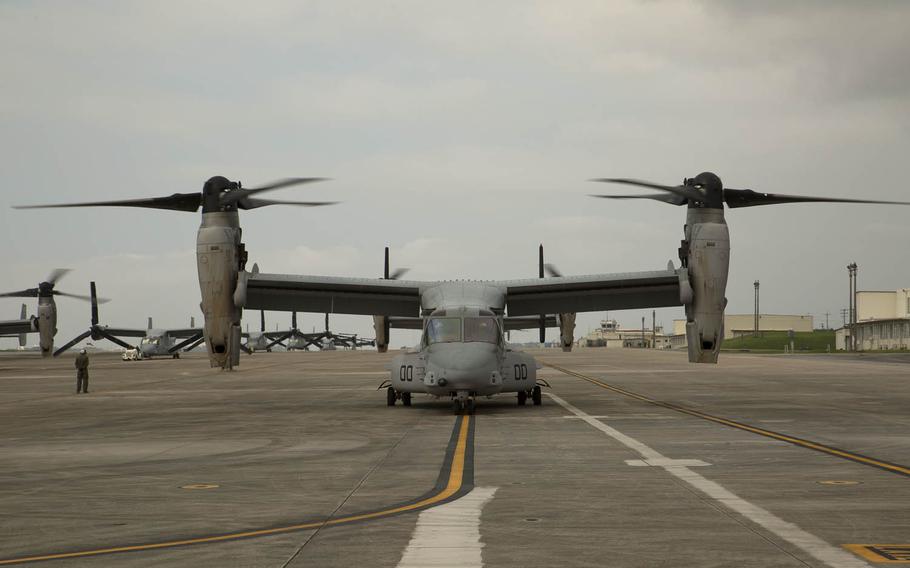 MV-22 Ospreys with Marine Medium Tiltrotor Squadron 265, 31st Marine Expeditionary Unit await the green light for takeoff April 17, 2016, at Marine Corps Air Station Futenma in Okinawa, Japan. Four out of five Okinawans oppose a plan to realign U.S. forces on the island prefecture and more than half want the Marine Corps to leave, according to a recent poll. (Jessica Collins/U.S. Marine Corps)

Opposition to U.S. forces on Okinawa is hardening following a homicide and other crimes involving Americans, with a recent poll showing most respondents want the U.S. presence reduced or removed altogether.

The survey, conducted May 30-June 1 by the Ryukyu Shimpo newspaper and Okinawa Television, shows 83.8 percent oppose a plan to relocate Marine Corps Air Station Futenma away from a densely populated area to Henoko in the remote north — a move U.S. officials hope would reduce opposition to the base.

Rather than relocate the air station within Okinawa, 31.5 percent want it moved “outside of” Japan, and 23 percent support moving it off the island. The poll found 29.3 percent want the installation closed and “withdrawn soon.”

The 83.8 percent opposition total is a slight increase — 0.8 percent — in the percent opposed to the relocation plan when the question was asked in a June 2015 poll, according to the newspaper.

Only 9.2 percent of respondents believed “the Henoko relocation plan should proceed,” the newspaper reported.

When it comes to the handling of criminal cases, four out of five Okinawans also want the U.S. and Japan to revise the status of forces agreement that sets rules for handling criminal cases involving U.S. personnel, the newspaper reported.

Last week, Japanese police recommended rape and murder charges for Kenneth Franklin Gadson, a former Marine who works at Kadena Air Base. Gadson, who goes by his Japanese wife’s family name of Shinzato, has been held since May 19 in connection with the death of 20-year-old Rina Shimabukuro. Police say she was hit on the head with a stick and stabbed during an attempted rape.

Asked which measures should be used to prevent incidents and accidents related to U.S. military personnel, the most popular answer during polling was, “withdraw all bases from Okinawa,” at 42.9 percent, followed by “reduce and restructure the U.S. military in Okinawa,” at 27.1 percent and “thorough enforcement of training for military personnel” at 19.6 percent. The Ryukyu story did not say how many people were polled and did not give a margin of error.

“The larger the number is, the larger the potential of crimes and accidents is, and therefore it gives more [negative] impacts on the lives of people here,” he said.

It’s significant that about 43 percent of respondents want U.S. forces to totally withdraw from the island, said Masaaki Gabe, professor of international relations at the University of the Ryukyus.

It’s probably the first time since 1972, when the U.S. handed control of Okinawa back to Japan, that so many locals have felt that way, he said.

Increasing opposition to the Futenma relocation plan reflects support for Onaga, who has pledged to block the project, he said.

“The project has been halted since March, and people see that momentum is on the governor’s side,” Gabe said. “The percentage will not change drastically because it is the unchanged consensus of people of Okinawa.”