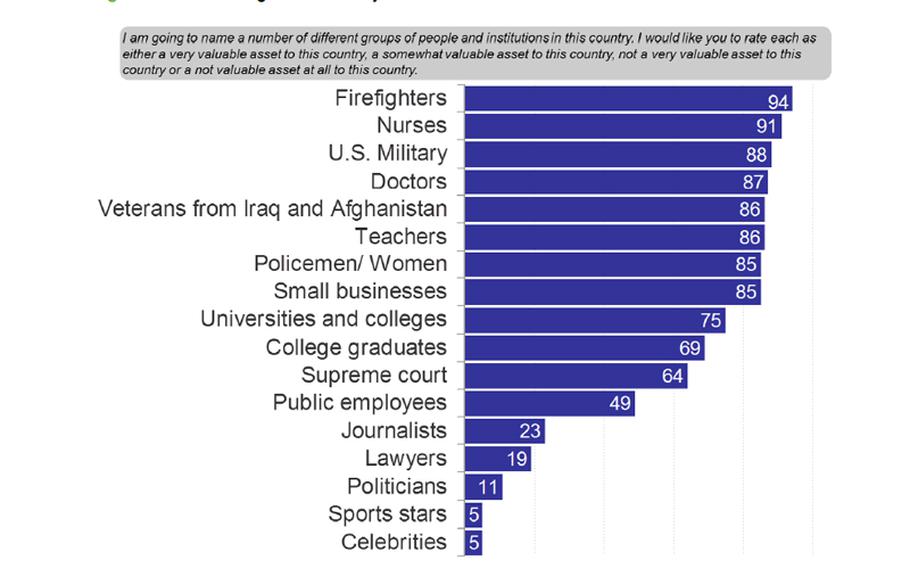 WASHINGTON &mdash; Civilians see Iraq and Afghanistan veterans as &ldquo;valuable civic assets&rdquo; but also believe that most are poorly educated and suffer from post-traumatic stress disorder, according a report released Wednesday.

The nationwide survey, commissioned by the veterans advocacy group The Mission Continues and the Hollywood production company Bad Robot, was designed to &ldquo;understand civilian perceptions of America&rsquo;s newest generation of returning veterans.&rdquo;

Researchers found a great deal of respect and admiration for those whose served in the military, but also confusion over their backgrounds and long-term health prospects.

&ldquo;It&rsquo;s good news to hear that most Americans view returning vets as disciplined, hard-working, high-character citizens,&rdquo; said Laura L&rsquo;Esperance, spokeswoman for the group. &ldquo;But we are concerned that the misperceptions out there may be contributing to the transition problems vets face when they do come home.&rdquo;

The survey, which polled 800 people, found that 86 percent saw Iraq and Afghanistan veterans as valuable figures in society, on par with doctors and firefighters (politicians came in at 11 percent, celebrities at 5 percent). Two-thirds of the respondents believe that those veterans&rsquo; skills and leadership can help improve their community.

But 53 percent said they believe that the majority of veterans returning from Iraq or Afghanistan suffer from PTSD &mdash; most experts say about one-fifth may suffer from it &mdash; and 44 percent believe that those veterans are more likely to abuse drugs and alcohol than non-veterans. VA studies have shown slightly higher rates, but not a dramatic difference.

They also viewed younger veterans in general as hard workers but likely without a college-level education, even after they leave the military. In the survey, 58 percent of civilians believe that veterans benefits are &ldquo;less than adequate&rdquo; and 54 percent agreed with the statement &ldquo;the country is not doing a good job assisting Iraq and Afghanistan veterans.&rdquo;

L&rsquo;Esperance said Bad Robot&rsquo;s involvement in the survey was an extension of their military outreach efforts, which have included film screenings for military personnel in recent years. She said both groups hope to use the information to spur conversation about veterans, both on the challenges they face and the baggage those false assumptions bring.

The survey is available online at www.missioncontinues.org/newgeneration.