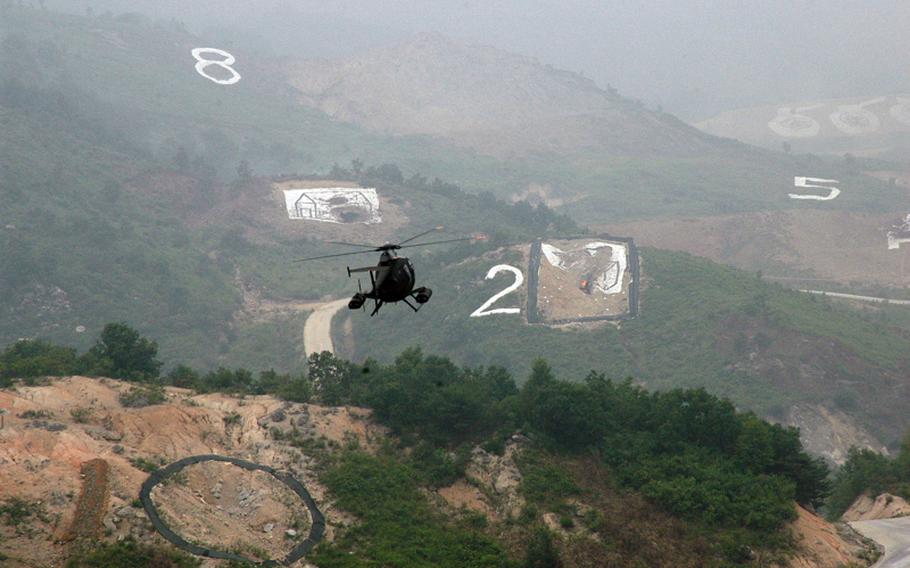 An attack helicopter approaches a target on June 22, 2012, during a live-fire drill involving the militaries of the U.S. and South Korea. The hourlong exercise was staged in front of more than 4,000 spectators about 15 miles south of the Demilitarized Zone. (Jon Rabiroff/Stars and Stripes)

An attack helicopter approaches a target on June 22, 2012, during a live-fire drill involving the militaries of the U.S. and South Korea. The hourlong exercise was staged in front of more than 4,000 spectators about 15 miles south of the Demilitarized Zone. (Jon Rabiroff/Stars and Stripes) 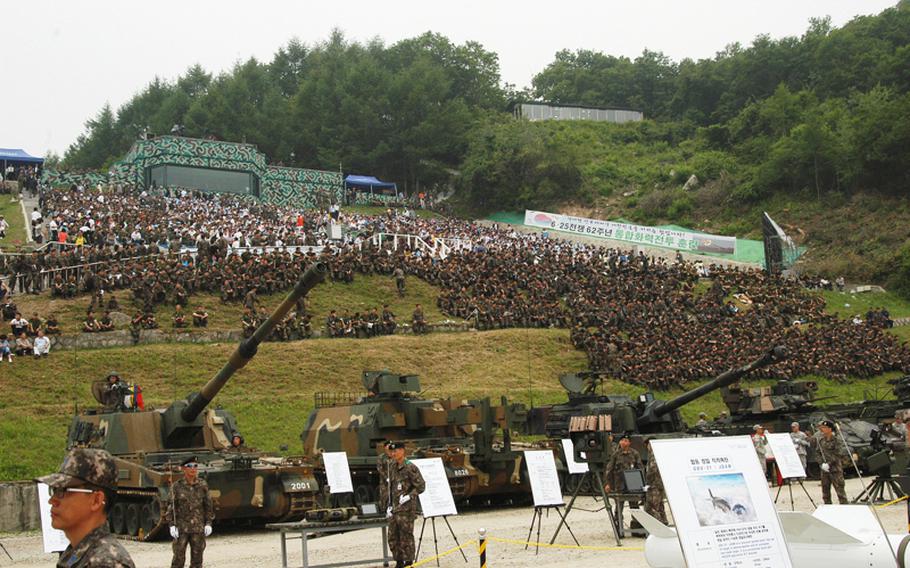 More than 4,000 spectators cover a hillside near Pocheon in South Korea on June 22, 2012, to watch a live-fire drill staged by the militaries of the U.S. and South Korea about 15 miles south of the Demilitarized Zone. (Jon Rabiroff/Stars and Stripes)

SEOUL - South Koreans believe reaching a lasting peace with North Korea depends more on bolstering national security than reinforcing Seoul's partnership with the United States, according to a government poll released this week.

The phone survey, conducted by the Ministry of Patriots and Veterans Affairs to mark the 60th anniversary of the armistice that ended active combat in the Korean War, asked what efforts were needed to reach a permanent peace settlement on the Korean peninsula.

Respondents were allowed to choose two of the five options. Only 20.4 percent selected reinforcing the South Korea-U.S. alliance, ranking it last. The most popular option, selected by 47.7 percent, was "reinforcing our sense of national security," followed closely by cooperation with Pyongyang, 46.8 percent.

An official with the ministry, speaking on condition of anonymity, said the poll is not a sign of worsening relations with the U.S., but rather a lack of knowledge about the past relationship between the two countries among those born long after the cease-fire.

"Young South Koreans don't know much about the alliance between the U.S. and South Korea and what happened 60 years ago," she said.

The survey of 1,020 adults was conducted Nov. 15-24, several weeks before North Korea successfully launched a long-range rocket believed to be a test of ballistic missile technology that could someday allow Pyongyang to strike the continental U.S. with a nuclear warhead. North Korea claimed the Dec. 12 launch put a peaceful observation satellite into orbit.

Hwang Jihwan, a professor of international relations at the University of Seoul, said the poll results would likely have remained the same if the survey had been conducted after the launch because South Koreans have endured years of tensions between Seoul and Pyongyang.

"The relationship between the two Koreas is already frozen," he said. Meanwhile, the South Korean-U.S. relationship has improved under President Lee Myung Bak, whose term ends next month, so few people believe it needs significant work.

Pyongyang has carried out a series of provocations in recent years, including nuclear tests in 2006 and 2009. In 2010, the North shelled a South Korean island, killing four people and is believed to have torpedoed a South Korean warship, killing 46 sailors.

There are also concerns that Kim Jong Un, who took control of North Korea a year ago following his father's death, could take more aggressive measures against the South in an effort to prove his legitimacy.

President-elect Park Geun-hye has pledged to take a tough stance if Pyongyang carries out provocations but says she favors more engagement with the North.

In addition, 45.7 percent of respondents said they expect the division of the peninsula into two countries to last for more than 20 years.

The poll, conducted for the ministry by Gallup Korea, carries a sampling margin of error of 3.1 percentage points.