Poll: 42% of Germans want US troops out of country 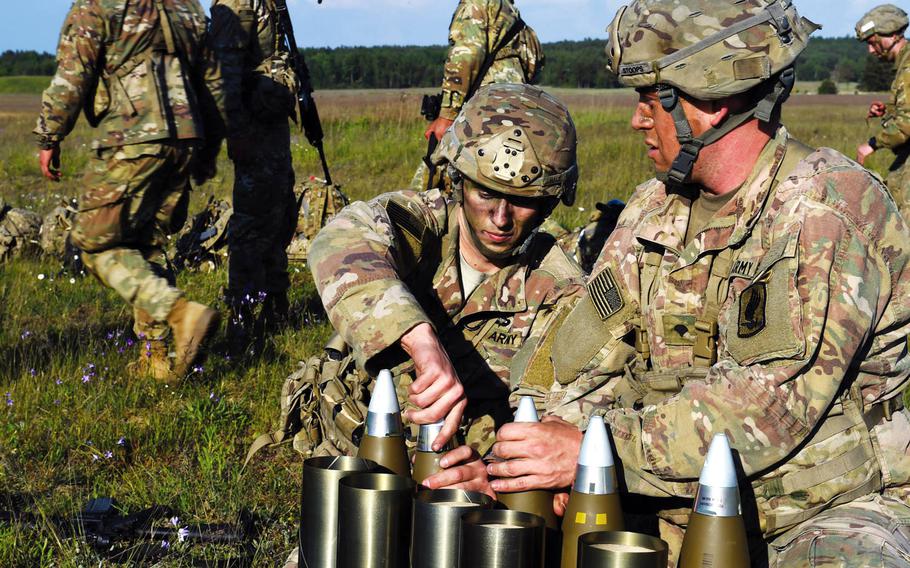 Buy Photo
Paratroopers with the 173rd Brigade Combat Team get artillery rounds ready for an artillery live-fire exercise at Grafenwoehr, Germany, Friday, May 18, 2018. A YouGov survey has found that a plurality of Germans want U.S. troops to withdraw from the country. (Martin Egnash/Stars and Stripes)

BRUSSELS — Many Germans want U.S. troops to withdraw from their country, where nearly 35,000 American servicemembers are stationed, according to a new poll.

The YouGov survey, commissioned by the German Press Agency DPA, found 42 percent of respondents want U.S. troops out, while 37 percent want them to stay and 21 percent are undecided or didn’t answer. The margin of error was plus or minus five percent.

The poll, taken a few days before this week’s two-day NATO summit in Brussels, also found that 75 percent are opposed to a benchmark that calls for each alliance member to hike defense spending to 2 percent of gross domestic product – a shortfall which President Donald Trump has cited as evidence of allies being too dependent on U.S. protection.

Additionally, 35 percent of respondents are opposed to Germany increasing its defense spending levels to 1.5 percent of GDP, which it plans to do by 2025 as part of an 80 percent spending hike. Another 25 percent were undecided or did not answer.

Trump blasted Germany on Wednesday at the summit as a security free-rider that doesn’t invest enough in defense and relies on the U.S. military.

“They have to step it up immediately,” Trump said. “Germany is a rich country. We are not going to put up with it.”

For months, Trump has ripped allies, and particularly Germany, for not doing enough on defense matters. But as Trump has ratcheted up his criticisms, the YouGov poll suggests that the hectoring is doing little to motivate German voters to meet Trump’s demands.

When respondents were asked if they felt more sympathy for Trump or Russian President Vladimir Putin, 6 percent said Trump, 36 percent said Putin and 58 percent said they did not know or didn’t answer.

In an earlier Pew Research Center poll, 11 percent of Germans expressed confidence in the U.S. president to do the right thing in world affairs in 2017, down from 86 percent in 2016.

The lack of public support could mean that Chancellor Angela Merkel and other conservatives who favor boosting defense spending levels will struggle to win political support to meet the 2 percent NATO benchmark in the coming years.

Meanwhile, the support for an end to the post-World War II American military presence in their country comes as the Pentagon is conducting a review of its force structure in Europe.

Earlier this month, the Washington Post reported that Trump expressed interest in a large-scale pullout from Germany and possibly returning them to the U.S. or repositioning some elements in Poland. The Pentagon has said there are no plans to yank troops from Germany, where U.S. bases provide staging and transportation hubs for operations in Africa and the Middle East.

Germany is home to the second-largest number of U.S. troops overseas after Japan. During the Cold War, Germany hosted the majority of the 300,000 troops deployed to Europe, but the numbers declined sharply after the collapse of the Soviet Union.

Nick Witney, a former head of the European Union’s European Defense Agency, predicted that Trump’s continuous badgering of America’s NATO allies will spark efforts within the EU to boost the bloc’s own nascent military capabilities rather than relying exclusively on NATO for defense. He said that in that case, U.S. weapons sales in Europe would likely be the first to feel the backlash.

“If this doesn’t cause the EU to get deadly serious about ‘strategic autonomy’, nothing will,” said Witney, now a senior fellow at European Council on Foreign Relations, a pan-European think tank.