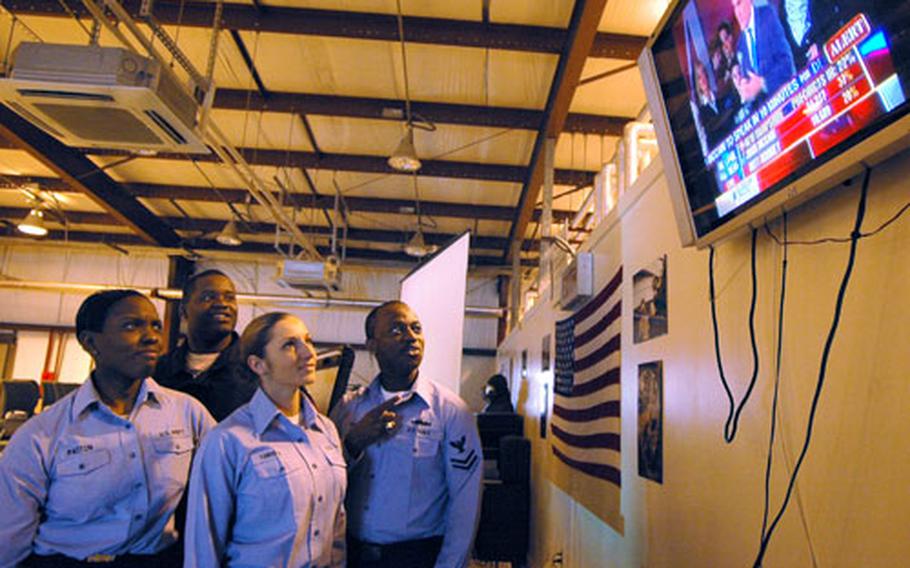 U.S. servicemembers and civilians in the Pacific didn&#8217;t shy from talking politics Wednesday as primary results in Iowa and Wyoming last week and New Hampshire this week indicated the 2008 race for president still has no clear favorite.

Of more than two dozen people interviewed in mainland Japan, on Okinawa and in South Korea, many cited the war in Iraq as the most important issue to them this election year.

Even more said they were ready for a &#8220;fresh face,&#8221; favoring a candidate with the ability to bring about change over one with a deep political resume.

&#8220;It could be history in the making,&#8221; said Army Sgt. Joel Black of 595th Maintenance Company at Yongsan Garrison, South Korea.

While a few already have settled on a candidate, most said they were undecided &#8212; at least to a degree.

With a husband about to deploy, the war in Iraq is issue No. 1 for her.

Seaman Michellia Patton of Yokosuka Naval Base, Japan, also is torn between Clinton and Obama.

But if it came down to it, she said, &#8220;I would rather see the first female president than the first black president. Women think differently than men do, and we need to make a change.&#8221;

He&#8217;d be happy, however, with any of the Democratic candidates as president.

Others, like U.S. Forces Korea contractor Don Parker, are taking rhetoric about change with a grain of salt.

Sasebo Naval Base, Japan, commissary contractor Elliot Jones said candidates are saying &#8220;what you want to hear, but the key is what they are going to do once you put them in office?.&#8221;

With an active-duty wife, Jones is focused on the war in Iraq. He&#8217;s interested in Clinton and Obama, and, on the GOP side, former senator Fred Thompson.

In South Korea, Maj. Conreau Williams, 37, an Area II public health nurse with 18th MEDCOM, said some soldiers are following the election closely, because they know the next president&#8217;s policies will determine their future.

Williams, who said she&#8217;s looking for a candidate who&#8217;s honest, is concerned about health care &#8212; for her family and, someday, when she leaves the military, for herself. She&#8217;s also concerned about the economy.

Chief Petty Officer Todd Mullanix, of Sasebo Naval Base, is concerned how the next president will treat America&#8217;s image abroad and the economy.

The country, he added, needs a chief executive who can bridge the divide between right and left politics, he added.

Many servicemembers said they were registered to vote but would likely vote in just the Nov. 4 general election.

Second Lt. Scott Brehmer of the 2nd Infantry Division&#8217;s 1st Battalion, 72nd Armor Regiment said he follows the races closely but won&#8217;t vote in his native Michigan primary because of the cumbersome process.

Iraq and energy prices topped Brehmer&#8217;s agenda. A fresh face may be able to handle those issues in a new way, he said.

That expectation is leading Brehmer, 37, to consider voting differently than in years past.

Tech. Sgt. Ryan Wyckoff, of Kadena Air Base, said he&#8217;s registered to vote in Texas. For him, the candidate to watch is Obama.

Primary DeadlinesTime is running out to register for the primary elections. The deadline has passed for Florida, South Carolina, Louisiana, Arkansas, Illinois, Missouri, Tennessee, Utah and Virginia, as well as Iowa and New Hampshire, which have held their contests.

Some states require registration before you can receive a ballot, and some have different deadlines based on party affiliation. In states holding caucuses, ballots will be accepted only for the general election in November.