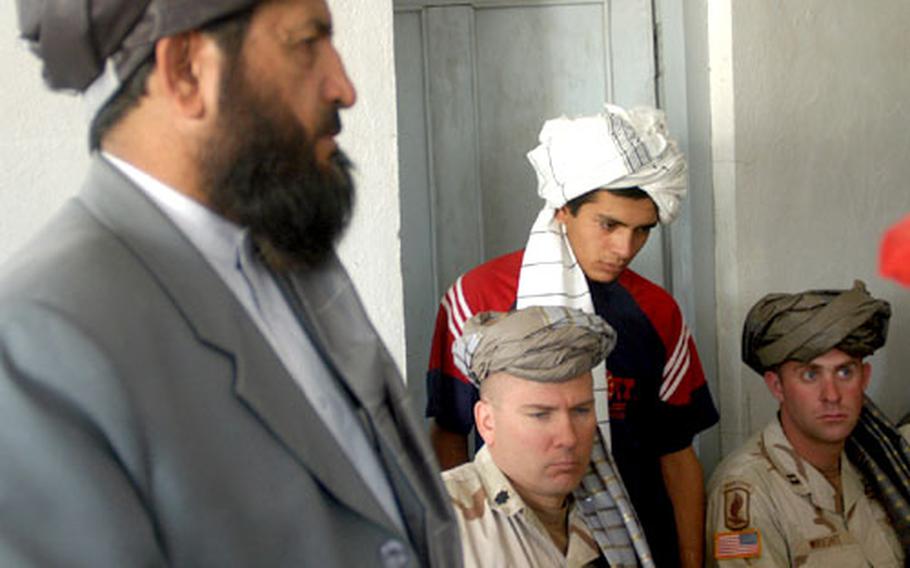 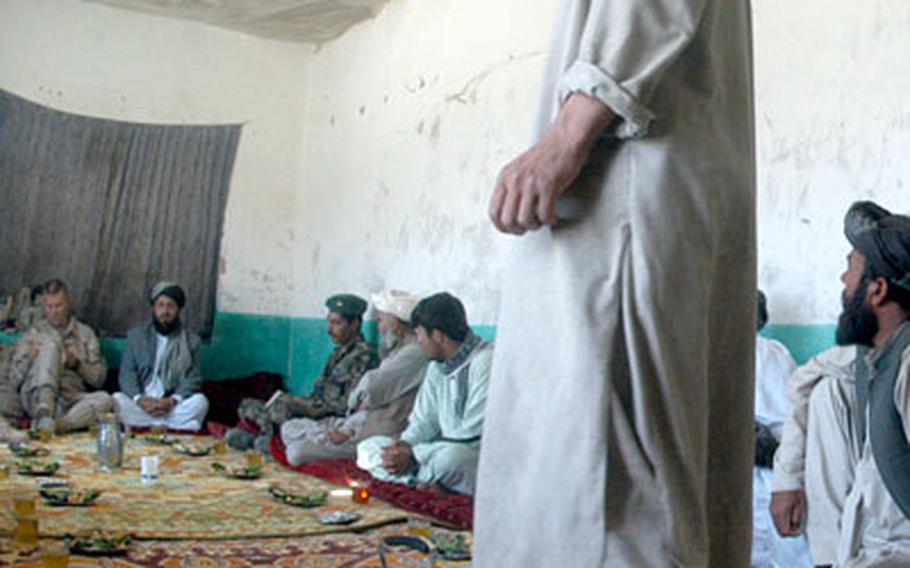 SHINKAY, Afghanistan &#8212; It was politicking, pure and simple &#8212; promises given, deals made, hands shaken and speeches spoken.

And though the language was foreign to a few soldiers of Company A, 2nd Battalion (Airborne), 503rd Infantry Regiment, who were providing security nearby, there was no doubt in anybody&#8217;s mind that Zabol province Gov. Dilber Armian was a politician.

Armian, who as governor was appointed to the position rather than elected, wasn&#8217;t the only one making promises, giving speeches and shaking hands Wednesday.

Alongside for much of the afternoon was Lt. Col. Mark Stammer, commander of the Vicenza, Italy-based battalion, who himself wheeled and dealed with local leaders and landowners, talking with them about road construction projects, wells and paying for security checkpoints during a shura, the traditional form of assembly in Afghanistan.

For Stammer, this wasn&#8217;t politics. It was war. Or at least, it&#8217;s one of the varied battles that the battalion must fight to bring security and stability to the province.

After cups of sweetened hot tea, which is traditionally offered at seemingly almost any meeting between two Afghans, the group got down to business.

Or at least they started to bring up the subject of business.

For every mention of a contract, there was digression to schoolbooks or the Taliban forces operating in the area. Deals in Afghanistan, much like the steaming hot glasses of tea themselves, are best taken only after simmering for a while. During the gathering, nothing concrete was seemingly offered and nothing concrete was hammered out.

With the teacups cleared, the group crossed Shinkay&#8217;s main &#8212; and only &#8212; street into the town&#8217;s medical clinic. There, Armian addressed the dozens of men who crowded the small building&#8217;s hallways. Outside, a loudspeaker blared Armian&#8217;s speech to any and all villagers within earshot.

An interpreter later explained that Armian mostly talked about the positive impact coalition forces have had on the area, building schools, medical facilities and &#8220;the road.&#8221;

The two and their respective entourages had flown from Forward Operating Base Lagman in Qalat to Shinkay for the quick afternoon trip, landing at Able Company&#8217;s FOB Sweeney less than a half-hour after takeoff.

Had the trip been done by vehicle, it couldn&#8217;t have been done in one afternoon. Trips between Qalat and Shinkay take hours, if not full days, because of the poor road network across the Surri District and through the narrow Dab mountain pass.

Plus, there&#8217;s the possibility of Taliban land mines or ambushes anywhere along the route.

A better road, Stammer stressed to those packed in the clinic&#8217;s halls, was being built, but not by Afghan civilian work crews.

&#8220;I&#8217;ve tried to contract companies for more than $200 million Afghanis [about $4.675 million] but currently the only men working on this road are mine and his,&#8221; Stammer said, pointing to his Afghan National Army counterpart, who also attended the meeting.

U.S. forces from the 173rd Airborne&#8217;s Combat Support Company recently began grading and laying down a crushed gravel road surface on what will become the main road from Qalat to the Shinkay area. But there&#8217;s still months of work left to do.

And though there were no takers at the clinic, when the military and civilian leaders retired to the district headquarters for a quick meal, those deals finally started to come together. One area leader said he&#8217;d drum up manpower for the road.

Stammer&#8217;s promise of jobs resonated well among Shinkay&#8217;s voters. Armian, it seemed, wasn&#8217;t the only one with a grasp of politicking.