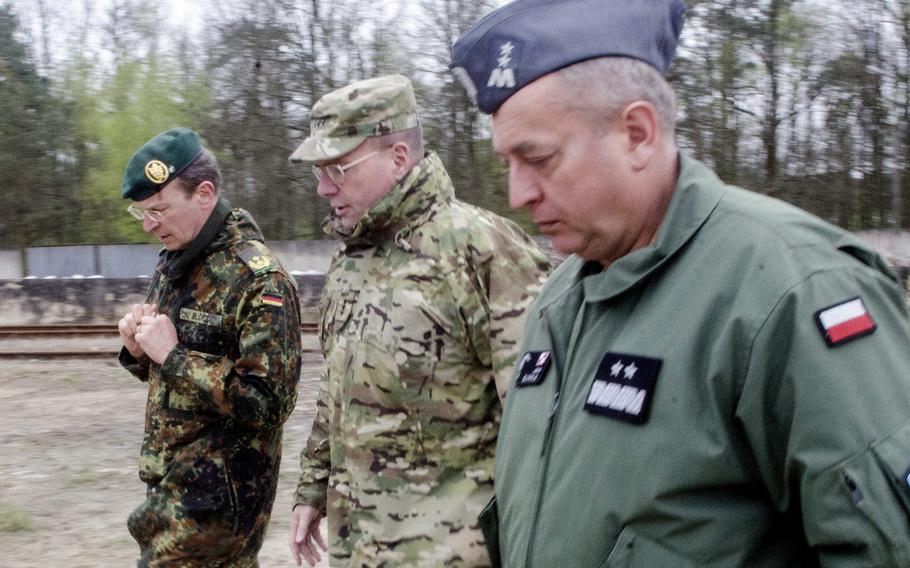 POWIDZ, Poland — U.S. Army Europe’s Lt. Gen. Ben Hodges stood atop the railhead that supplies the strategic air base in this small central Poland village, and told his military planners they were thinking too small, too “Petticoat Junction” about the potential of Powidz.

Hodges is leading a team of USAREUR and other allied leaders on a “terrain walk” through key outposts in Europe in search of ways to ensure friendly forces can move with speed in case of a crisis along NATO’s eastern edge. And for the Army, Poland has emerged as the linchpin to those efforts.

In the past three years, the U.S. military has gone from a sporadic presence in Poland to one that is semi-permanent, and the pace of change shows no sign of slowing. Hodges said he wants Powidz to be built into a major hub, and steps are already underway to achieve that aim with a brigade’s worth of combat-ready tanks and artillery to be stored in the town in the years ahead.

The Polish air base in Powidz is vast, with room for growth and serviced by the longest military airfield in the country — one that can support even the largest aircraft.

Poland’s increasing importance is the result of a combination of factors, Hodges said, including geography and existing hubs, such as the NATO Enhanced Forward Presence unit in the country’s northeast.

“Any contingency we have to deal with, we’ll almost certainly have to come through Poland,” he said.

During the next two years, about $70 million will be pumped into 77 different military infrastructure projects in Powidz, Zagan and other sites in Poland to improve infrastructure for both Army and U.S. Air Force operations. About $200 million more in NATO funds will be tapped to build a new storage site in Powidz for stocking Army combat gear.

The moves come as NATO sets up multinational battalions in the Baltics and Poland, where 2nd Cavalry Regiment soldiers are operating as a deterrent force roughly 100 miles from Poland’s border with the Russian military enclave of Kaliningrad.

Moscow has taken notice of NATO’s boosted presence in the region.

“This creates new realities,” Alexander Grushko, Russia’s ambassador to the alliance, told state media Wednesday. “NATO is trying to expand capabilities for reinforcement. That concerns airfields, ports. This is going to change the situation in central Europe profoundly.”

Moscow would take “necessary steps” to secure its interests, he said without elaborating.

The push to shorten the time it takes to mobilize troops is linked to their concerns about Russia’s intentions in the broader region.

“Given the Russian style of war now — the misinformation, the cyber, all these things, it can make it difficult to see what’s coming,” Hodges said as his delegation arrived in Lithuania on Wednesday for talks. “We think we’ll have a very short period of unambiguous warning.”

Hodges, together with dozens of other military and civilian leaders, arrived in Lithuania after visiting bases in Poland — all part of the four-day terrain walk, aimed at enhancing alliance forces’ “speed of assembly.”

“It’s about doing the hard work to understand infrastructure procedures, find the friction points and figure them out,” Hodges said.

One of the major friction points that become apparent during the walk was the competition for railway cars. In a crisis, movement of heavy equipment such as tanks and artillery would require specialized cars that are not always available.

“Part of that is physics — you need X number of rail cars,” Hodges said. “But we can do things to improve our efficiency, both working with the Deutsche Bahn and our own efficiency.”

In past terrain walks, military leaders have also discovered difficulties moving gear from west to east, where countries in the Baltics rely on different rail gauges.

The push to add rotational forces and pre-positioned gear farther east is one way to offset the challenges of moving by rail from western Europe.

Col. Chris Norrie, commander of 3rd Armored Brigade, 4th Infantry Division, out of Fort Carson, Colo., said his soldiers now serving as a rotational force in the region had so far been successful in moving their vehicles around Poland and other eastern states.

“We’ve not yet encountered a problem where we couldn’t move because of infrastructure, but we’ve been working with our partners to see how we can most efficiently move,” he said. “The key for us has been learning about the environment. The most valuable place for us to learn is with our allies, and they have been open and sharing and exceptionally helpful.”