Polish troops lead the way in demining Bagram base 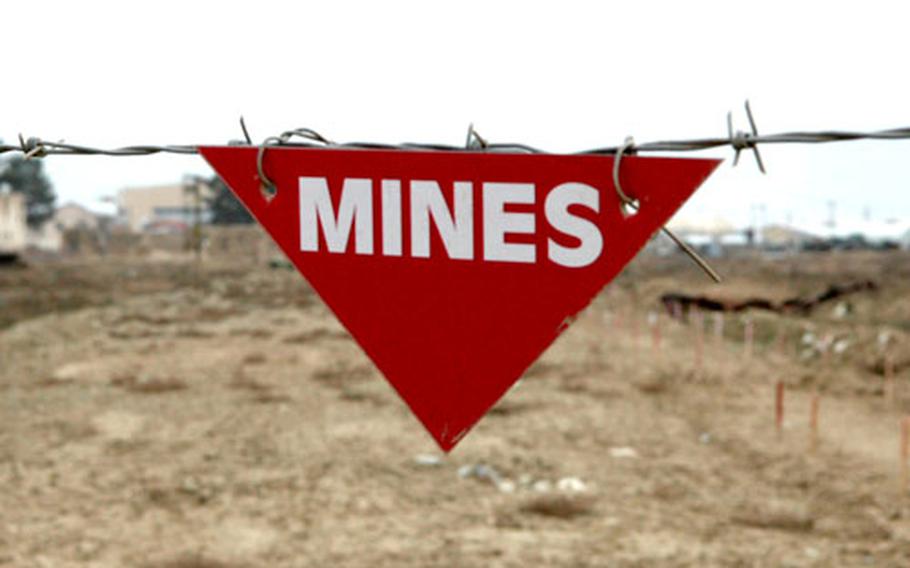 Red flags mark areas on Bagram Air Base, Afghanistan, where members of a Polish demining team search for mines and old ordnance used as bombs. As many as 20 million mines are scattered across the country. (Anita Powell / S&S)

Red flags mark areas on Bagram Air Base, Afghanistan, where members of a Polish demining team search for mines and old ordnance used as bombs. As many as 20 million mines are scattered across the country. (Anita Powell / S&S) A member of a Polish demining team at an area of Bagram Air Base, Afghanistan, looks for mines and old ordnance used as bombs. (Anita Powell / S&S)

BAGRAM AIR BASE, Afghanistan &#8212; Before officials expand this base to roughly twice its current size, they&#8217;ll have to manually evict countless longtime tenants.

The task illustrates one of the many obstacles facing Afghanistan: The nation is the second-most mined country in the world, with anywhere from 5 million to as many as 20 million mines scattered in its rugged terrain. Much of the ordnance is found in and around former Soviet bases &#8212; like Bagram &#8212; and at former Northern Alliance and Taliban strongholds.

&#8220;This is a pretty big mess right now,&#8221; said Marine Gunnery Sgt. Mike Messina, who helps lead the Mine Action Center, which coordinates demining activities for U.S. and coalition bases around Afghanistan. &#8220;There is a huge demining effort in Afghanistan right now.&#8221;

At Bagram, some of the most detailed and difficult demining work is handled by the Polish army, which has a company-sized presence on base. The sappers of the 1st Engineering Brigade of Brzeg, Poland, take to the base&#8217;s fields daily, spending hours kneeling in the earth, tentatively poking around with metal detectors and spades.

That said, sappers say the extreme danger of the job is constantly in the back of their minds.

&#8220;Only the crazy don&#8217;t get scared,&#8221; Warrant Officer 1 Mariusz Mazur said as he watched a kneeling colleague slowly turn dirt with a spade, as if preparing to plant a petunia.

A dinner-table-sized plot of land might take 10 hours to demine, said Messina, adding that lacing the same area with mines could take as few as 15 minutes.

The center also uses civilian deminers and members of the 391st Engineering Battalion, an Army Reserve unit based in South Carolina, to conduct demining activities on the air base. Demining machinery and dogs are also used to clear areas.

Over the last four months, the sappers have found 12 anti-personnel mines, many of them Israeli-made box mines, in a small area on the base. Almost every search yields munitions, and deminers conduct two or three controlled detonations daily.

Even after the areas are considered clear, officials say, a few stubborn tenants will remain.