Policy on sexual activity varies from unit to unit 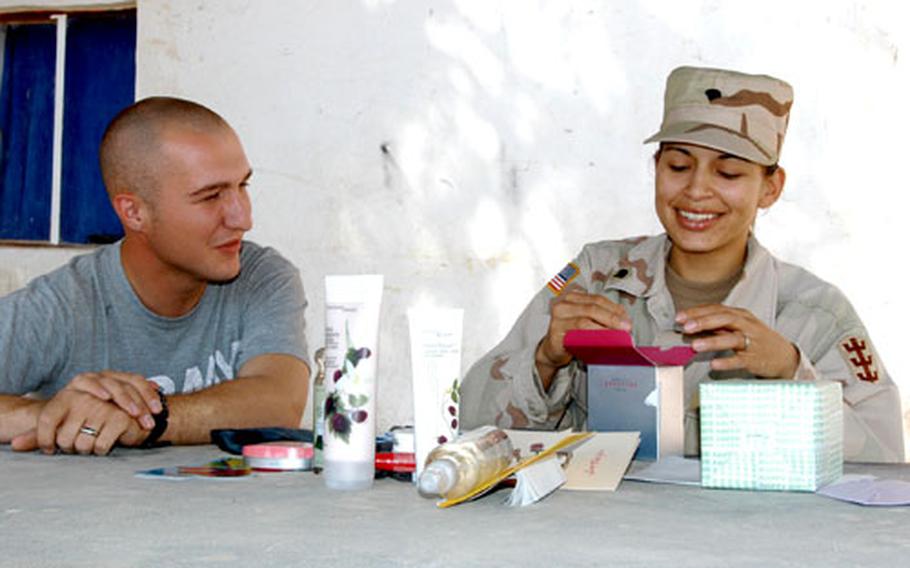 Spc. Sally Dominique opens a birthday present from her husband, Spc. Seth Dominique, in Mosul, Iraq. Their unit, the 94th Engineer Combat Battalion (Heavy), prohibits soldiers from engaging in any type of sexual activity while they are deployed to Iraq. (Rick Emert / S&S)

MOSUL, Iraq &#8212; Save the Lee Greenwood and Toby Keith anthems for the homecoming.

During their deployment, the request line for some married soldiers serving together in Iraq would more fittingly include tunes such as &#8220;(Can&#8217;t Get No) Satisfaction&#8221; by the Rolling Stones or &#8220;Sexual Healing&#8221; by the late Marvin Gaye.

General Order No. 1, which, among other conduct issues, prohibits soldiers from drinking alcohol while deployed, also covers sexual activity.

The policy on sex varies from unit to unit, but for the 94th Engineer Combat Battalion (Heavy) and its attached unit, the 535th Engineer Company (Combat Support Equipment), the policy is no sex at all, whether married or single.

But in Afghanistan, Lt. Col. Jerry O&#8217;Hara, a spokesman for Combined Joint Task Force-76, said there is no policy against married servicemembers in the task force sharing quarters. In fact, he said the command allows that to happen &#8220;to the extent possible.&#8221;

To make matters worse for soldiers in Iraq, Army regulations prohibit soldiers from kissing, hugging or holding hands in public while in uniform &#8212; and soldiers deployed to Iraq are always in either desert camouflage or physical training uniforms. All soldiers share tents with fellow troops; therefore, they are always in the public eye.

&#8220;It makes it hard to take when you talk to married couples in other units here, and they are allowed to live together,&#8221; said 1st Lt. Heather Sprowls, of the 535th Engineers.

While some units may make provisions for married soldiers to live together and engage in sexual activity, the 94th opted to make it abstinence across the board.

&#8220;To be fair and equitable, it had to apply to everybody,&#8221; said Lt. Col. Alfred Pantano, battalion commander. There are 14 married soldiers deployed together to Iraq, but there are more than 600 soldiers in all from the battalion.

The reasoning behind the policy is to maintain combat readiness.

&#8220;If a female soldier gets pregnant and has to be redeployed [to Germany] &#8212; which is the standard &#8212; then that cuts away at our combat power,&#8221; Pantano said. He checked with Task Force Freedom, which his battalion supports, and with the judge advocate general&#8217;s office before implementing the policy to ensure it was both legal and enforceable, he said.

Now seven months into the deployment, the soldiers seem to have accepted the policy.

However, they still aren&#8217;t happy with General Order No. 1. Most of them have been married two years or less and haven&#8217;t really been able to set up house between their two deployments to Iraq.

As newlyweds, they are living through a yearlong, old-fashioned courtship.

Now in their fourth year of marriage, Sgt. 1st Class Norrine Gladney and Sgt. Marc Gladney, both of the 94th Engineers, are an old married couple compared to the others, and the stress of the deployment sometimes makes them fight like one.

Like any Army policy, it&#8217;s the law of the land and meant to be followed. But there are some unique situations where the command gives a little slack.

&#8220;I warned my first sergeant that I was going to lose my military bearing for a minute when I saw my husband again and give him a great big hug,&#8221; said Spc. Dawn Andreli, of the 535th Engineers. She and Spc. Ivan Andreli had been separated for four of the deployment&#8217;s first seven months, because they were working on projects at different remote locations.

So until they can go on rest and recuperation leave or until they redeploy in about five months, the soldiers have to look for nonphysical ways to be passionate.