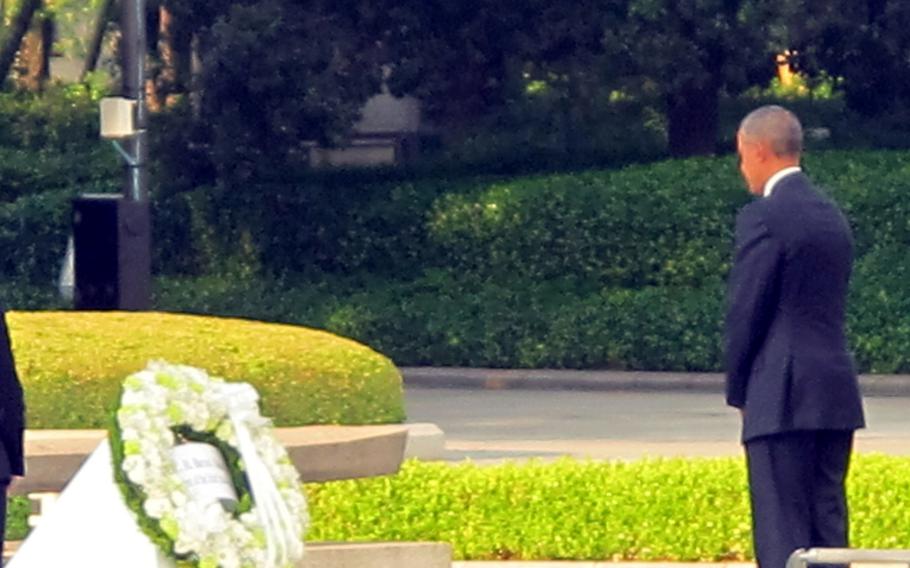 President Barack Obama stands for a moment of silence after laying a wreath at Hiroshima Peace Memorial Park on May 27, 2016. Obama called on the world to pursue a long-term vision of a nuclear-free world Friday, as he became the first U.S. president ever to visit a Hiroshima memorial dedicated to those died in the world’s first wartime atomic bombing. (Erik Slavin/Stars and Stripes)

HIROSHIMA, Japan — Amid the sculpted tributes and manicured grounds of the Hiroshima Memorial Peace Park, President Barack Obama made his appeal to humanity’s better instincts.

He offered no apologies for the decision by past leaders, seeking victory in a brutal world war, to drop the bombs that killed and poisoned combatants and children alike — nor was an apology asked for by most in Japan.

Instead, he called for the memory of the Hiroshima and Nagasaki dead to inspire a “moral awakening” that would lead the world’s peoples to embrace their interconnectedness.

“We have known the agony of war,” Obama wrote in a visitor’s book at the Hiroshima park’s museum Friday. “Let us now find the courage, together, to spread peace, and pursue a world without nuclear weapons.”

Obama’s largely altruistic speech also contained a different, shorter message: that as long as the desire to wage war exists, the United States and its allies “must possess the means to defend ourselves.”

Together, the messages summarized the dual themes of his administration’s nuclear policy: the idealism of a nuclear weapons-free world, and the backing of long-term plans that would spend hundreds of billions of dollars on modernizing the U.S. nuclear arsenal.

Defense Secretary Ash Carter told Congress in March that it could cost $350 billion to $450 billion, and that while it “presents an enormous affordability challenge for [the Pentagon], we believe it must be funded.”

Draw the timeframe past a couple of decades and that number gets even larger.

The total lifecycle cost of replacements for the aging nuclear-ballistic submarine fleet alone would top $347 billion, according to Arms Control Association, a nonpartisan group.

Add in new long-range bombers and refurbishments for warheads, intercontinental ballistic missiles, cruise missiles and other hardware, and some analysts say the total cost over 30 years could reach $1 trillion.

Plans include the B61 Model 12 bomb, which would add steerable tail fins and four settings that determine the level of destructive power.

Gen. James Cartwright, former vice chairman of the Joint Chiefs of Staff, told The New York Times in January that the added precision and ability to dial down destruction to about 2 percent of what struck Hiroshima make the new B61 model more “thinkable.”

“What if I bring real precision to these weapons?” Cartwright asked, according to the Times. “Does it make them more usable? It could be.”

Plans for the B61 and a new round of Air Force cruise missiles have come under criticism from arms control groups, senators and former Defense Secretary William Perry, who co-authored an article calling on Obama to kill the cruise missile project.

The criticism begs the question: How do Obama’s policies fit with his nuclear-free vision?

The reliability that comes with revamping old warheads also allows the U.S. to “modernize to downsize,” according to a Department of Energy report.

Obama has pushed for global nuclear arms reductions and signaled a willingness to act in tandem with Russia early in his term; however, chilled relations following Russia’s annexation of parts of Ukraine appears to have stalled any new agreements.

In the meantime, Russia is engaging in a modernization program of its own, according to a Federation of American Scientists report in January.

China has been working on missiles capable of launching multiple warheads.

Most troubling of all for many in the U.S. security establishment, North Korea has conducted four underground bomb tests, along with long-range missile launches, despite international condemnation and U.N. sanctions. The potential threat of nuclear scientists freelancing for terror groups also looms.

On Friday, Obama called on allies to stop the spread of nuclear technology “to new nations, and secure deadly materials from fanatics.”

He then continued to bring up themes of forgiveness and reconciliation, mixed with an admission that what the atomic bomb survivors watching him wanted most was still unlikely anytime soon.

“We may not realize this [nuclear-free] goal in my lifetime,” Obama said. “But persistent effort can roll back the possibility of catastrophe. We can chart a course that leads to the destruction of these stockpiles.”