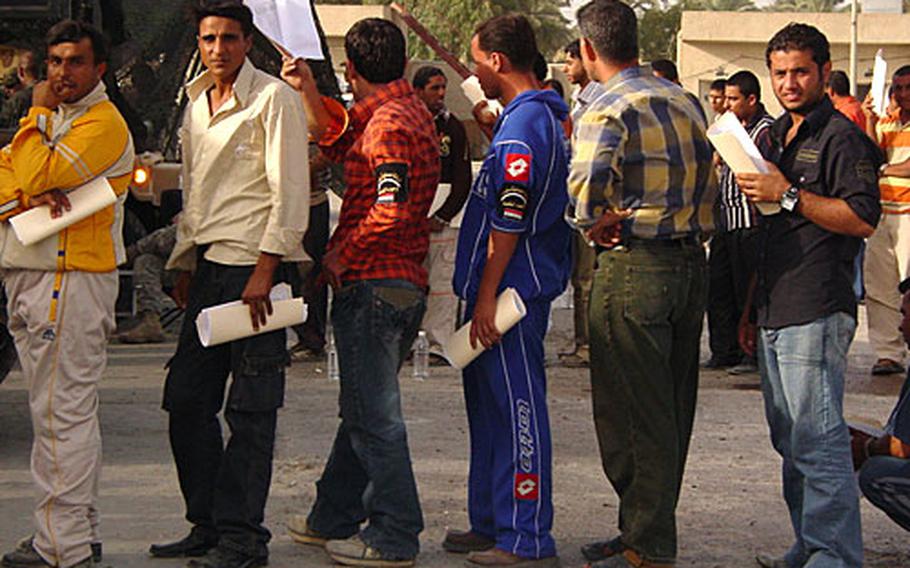 Iraqi police recruits stand in line during an all-day screening. Coalition forces are trying to help Iraq&#39;s Ministry of Interior hire thousands of new police for Baghdad in hopes of putting many of them in place before the U.S. military "surge" in forces leave early next year. (Scott Schonauer / S&S)

Iraqi police recruits stand in line during an all-day screening. Coalition forces are trying to help Iraq&#39;s Ministry of Interior hire thousands of new police for Baghdad in hopes of putting many of them in place before the U.S. military "surge" in forces leave early next year. (Scott Schonauer / S&S) 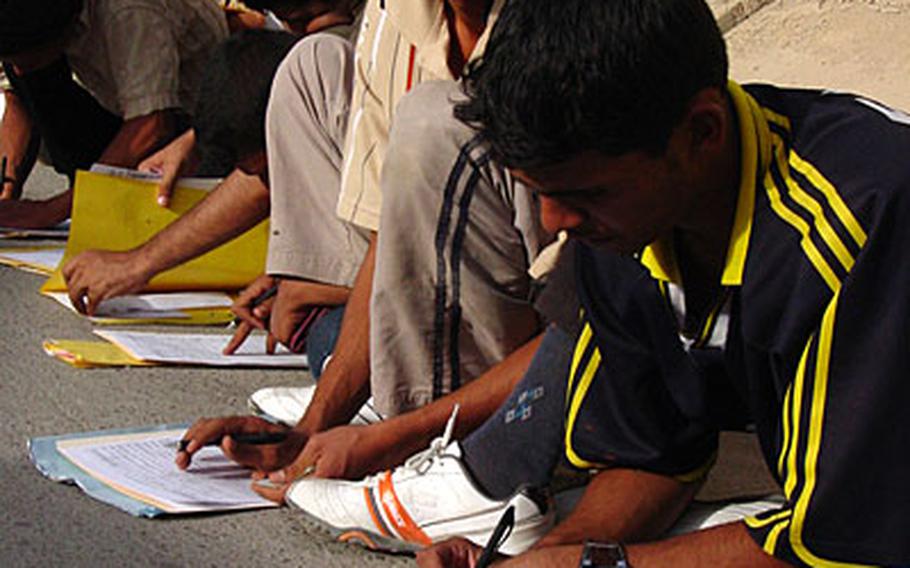 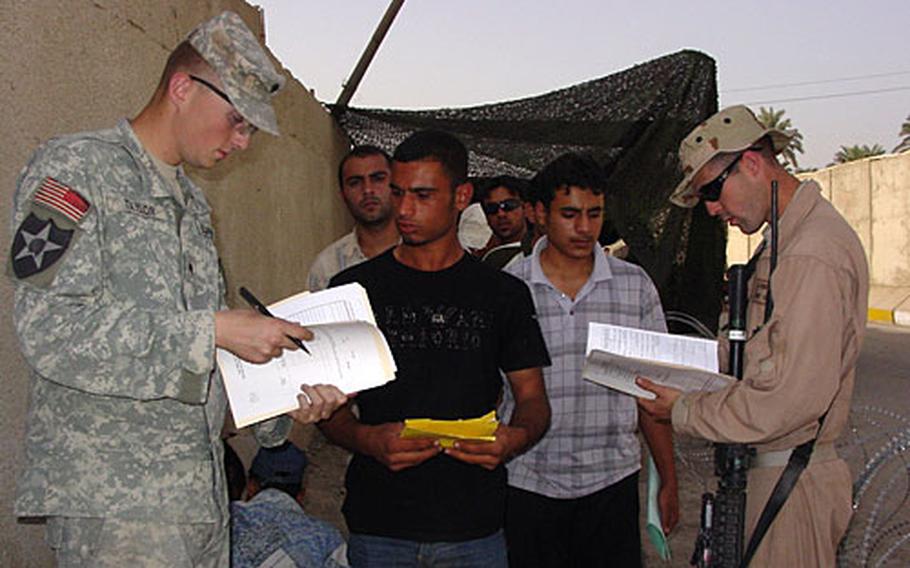 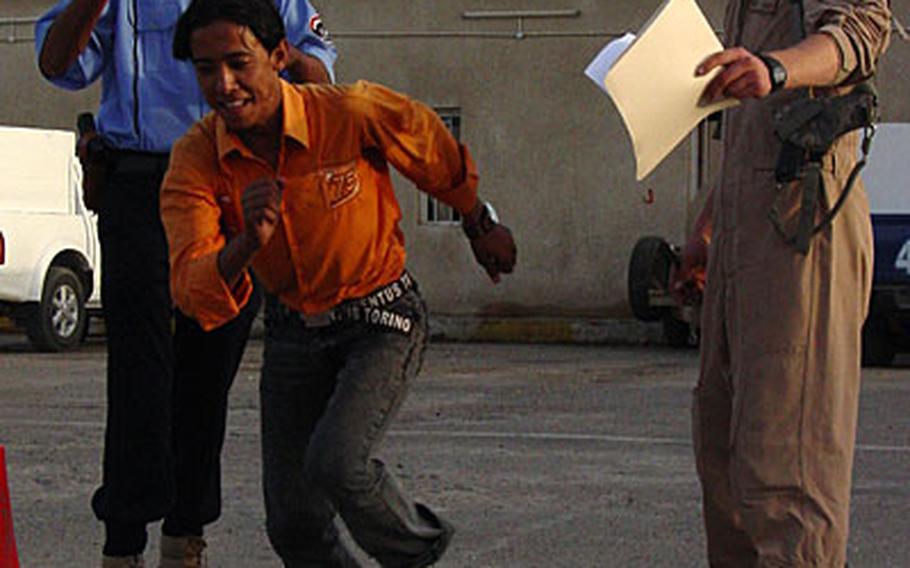 Iraqi men answering the call to become police officers sat for hours in the dust and sun waiting their turn. On what American soldiers called &#8220;Recruitment Day,&#8221; hundreds of potential recruits then went through a battery of tests to see if they had what it takes to carry a badge in Baghdad.

While a few showed off some impressive athletic skills during the fitness exam, many struggled to do a single push-up and most couldn&#8217;t lift their chin over the bar for an official chin-up.

The Iraqi government and coalition forces are on a recruiting blitz for police officers in hopes of hiring thousands to fill the ranks. The goal is to put the new cops on the streets by the time President Bush&#8217;s &#8220;surge&#8221; of American troops in Baghdad ends.

While violence is down across the country, the prospects of that trend continuing and becoming more permanent in this sprawling metropolis could hinge on the effectiveness of its fledgling police force.

The Iraqi Police commander in the city&#8217;s East Rashid area said law and order is improving, but he needs to add 1,500 new officers to the 700-member force.

The Fort Carson, Colo.-based 2nd Battalion is nearing the end of its 15-month deployment to the district, one of the most dangerous parts of town because of its mixture of Sunni and Shiite residents.

Risks and challengesFinding applicants is hardly a problem in a city with high unemployment, but the hiring spree is laden with risks and challenges. There are not enough Sunnis in the Shiite-dominated and -controlled police force, and getting them through the hiring process and academy has been slow. Applicants who applied this past May are just now going through training.

To increase the numbers, it also means that Iraq&#8217;s Ministry of Interior is accepting some recruits who once were part of the insurgency. That includes enlisting neighborhood mafia-type vigilantes who have been operating outside the law.

&#8220;You empower those dudes, for better or worse, it turns into a quiet neighborhood,&#8221; Caudle said. &#8220;So, now the goal is to take their little mafia group and give them a little bit of legitimacy by making them actual [Iraqi policemen.]

Hundreds applyCommunity leaders put out the word that the police were recruiting, and hundreds responded. Over a three-day period, recruiting drives have attracted as many as 800 people in one day. Some showed up hours before the screening started so they could get first in line.

The rising number of people wanting to police their own neighborhoods is a sign that al-Qaida in Iraq has lost the hearts and minds of the residents, soldiers say. They point to one incident that illustrates how far al-Qaida has dropped in stature. Earlier this year, men believed to be al-Qaida shot a mother and 5-month-old baby. Although the mother died, Army medics rushed to the aid of the infant and saved his life.

Residents on that block who heard or witnessed what happened have not forgotten, and things have started to take a turn for the better.

Restoring law and order to neighborhoods will soon rest on young recruits such as 24-year-old Abdul Rahaman. He and three of his friends came to the police tryout. They said they were too scared to consider becoming cops before because they or their families would have been killed, but the improved security situation inspired them to apply.

&#8220;There are a lot of people that are suffering and we want to make some kind of change,&#8221; Rahaman said. &#8220;You see that hundreds have come here to prove that they want to do this for their communities and their families.&#8221;

Coalition forces want to put police officers in their own neighborhoods because they know them so well and they have a vested interest in protecting them. However, they also want to create mixed police departments of Sunnis and Shiites. That&#8217;s not easy. But if it works, soldiers believe they won&#8217;t be needed as much. Time is running short, however.