Police: No sign of Marine missing in Okinawa seas 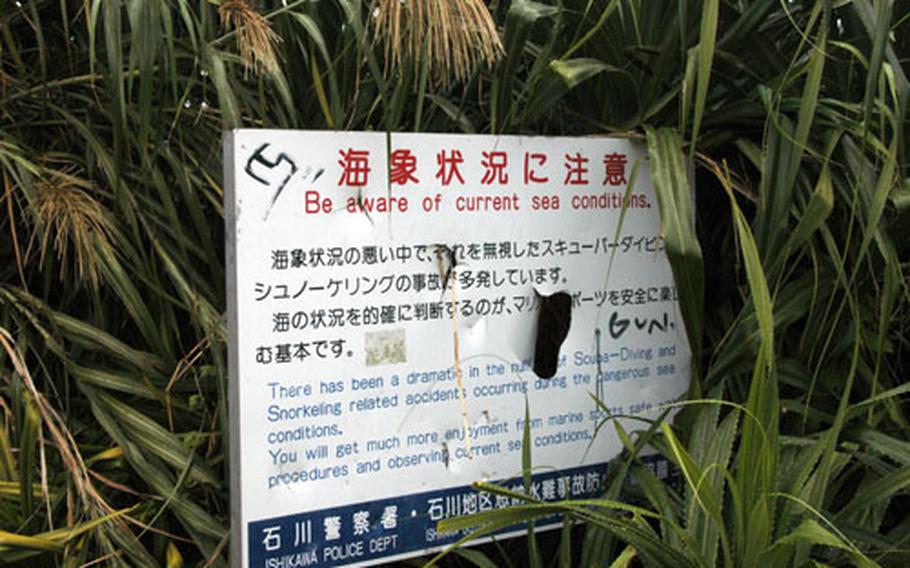 A warning sign for swimmers, shaded by overgrown leaves and plants, is posted near a pathway that leads to coved beach at Maeda Point in Onna Village, Okinawa ... (Natasha Lee / S&S)

A warning sign for swimmers, shaded by overgrown leaves and plants, is posted near a pathway that leads to coved beach at Maeda Point in Onna Village, Okinawa ... (Natasha Lee / S&S) ... buth there&#39;s nothing hidden about this warning at Maeda Point. (Natasha Lee / S&S) The ocean entrance at the bottom of this steep stairway at Maeda Point remained closed Monday as authorities continued a search for a 29-year-old Marine missing since Sunday. (Natasha Lee / S&S)

ONNA, Okinawa &#8212; The Japan Coast Guard and U.S. military continued to search Monday for a 29-year-old Marine reported missing Sunday while snorkeling near Maeda Point off the western coast of Okinawa.

He was snorkeling with a 20-year-old Marine when he was swept away by strong waves, said a spokesman for the Okinawa Prefectural Police in Uruma.

The younger Marine was able to swim back to shore and alerted a nearby man who called Okinawa police around 2 p.m., military and Japanese authorities said Monday.

In an e-mail Monday to Stars and Stripes, Rankine-Galloway said the two Marines could not be identified due to privacy and next-of-kin notification procedures, though Okinawa police released their ages.

A swim fin belonging to the younger Marine was found near the adjacent fishing port, but nothing connected to the missing Marine has been found, said a rescue worker with the Kin Fire Department.

Authorities said water conditions at the popular area in Onna Village were so dangerous Sunday afternoon that all swimming activities had been banned.

Ropes blocked a steep stairway leading to the ocean there Monday.

But tourists and avid divers often go to a nearby cove on the other side of the cliffs, which make up Maeda Point, to gain access to the water, an official from the Maeda Point administration office said.

A Japan Coast Guard ship was miles off shore.

Last year 12 people, including a 34-year-old Marine, drowned in waters off Okinawa, according to Okinawa and Marine Corps statistics.

Nineteen servicemembers have drowned off Okinawa since 2000, according to the Marine Corps Bases Installation Safety office.

Safety officials say accidents are more likely to occur when snorkeling than scuba diving because swimmers are less likely to be skilled snorkelers.