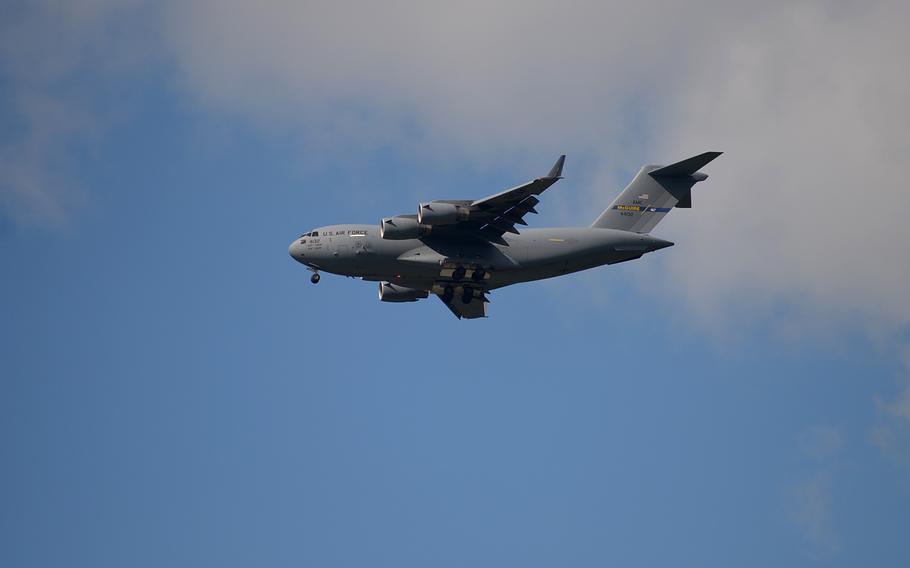 Buy Photo
A U.S. Air Force C-17 flies over Kaiserslautern, Germany, on its way to nearby Ramstein Air Base. A pilot of a C-17 landing at Ramstein was blinded by laser beam early Friday morning, according to German police. The plane landed safely. (Michael Abrams/Stars and Stripes)

KAISERSLAUTERN, Germany — The pilots of an Air Force C-17 on final approach to Ramstein Air Base early Friday were blinded by a laser beam from the ground, German police reported.

A police patrol searched the probable position from which the laser was aimed at the cargo plane as it approached for landing about 2 a.m., but they found no suspects, police said in a statement.

There was no danger to the safety of the aircraft, the statement said, citing the German flight safety agency.

A spokeswoman for the 86th Airlift Wing confirmed the incident but gave no further details.

Aviation experts and pilots associations say the shining of handheld, high-powered laser pointers at civilian and military aircraft is a growing problem in Europe and elsewhere.

Lasers pointed at aircraft can disorient and temporarily blind pilots when their light refracts off the plane’s windshield. In rare cases they can even cause permanent injury by burning the retina.

In March, crewmembers of a U.S. F-15E Strike Eagle descending toward RAF Lakenheath in England were temporarily disoriented by a laser beam directed at the cockpit.

A U.S. federal law adopted in 2012 made lasing aircraft punishable by up to five years in prison.