Police-hiring feud may have led to Diyala blast 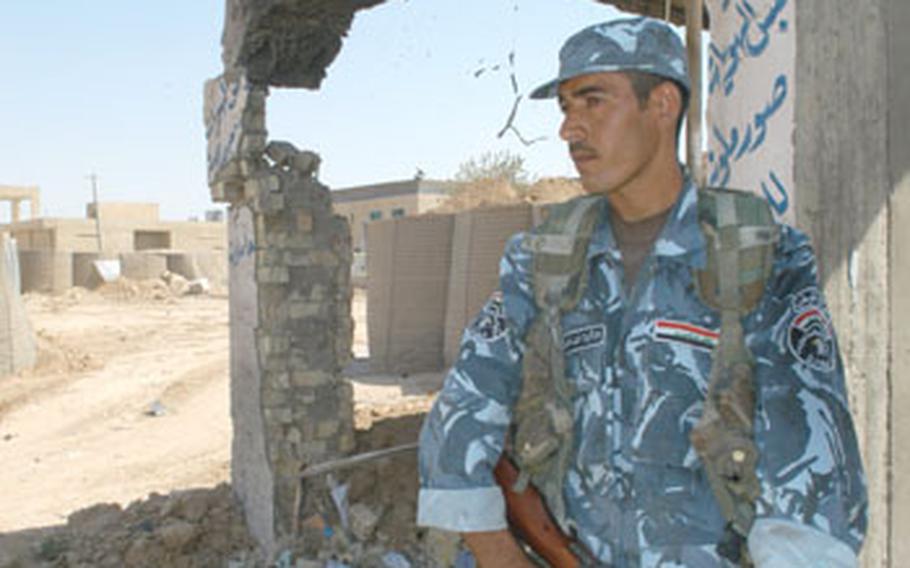 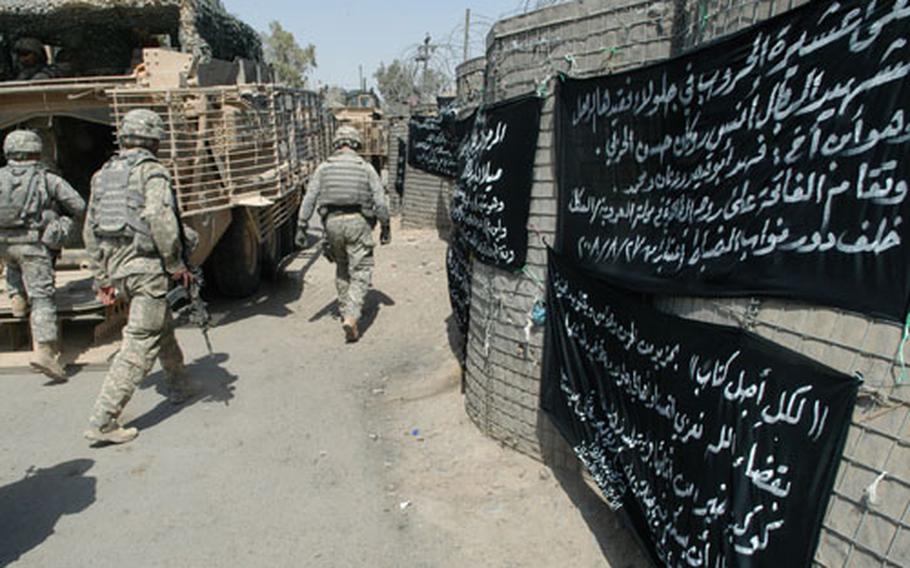 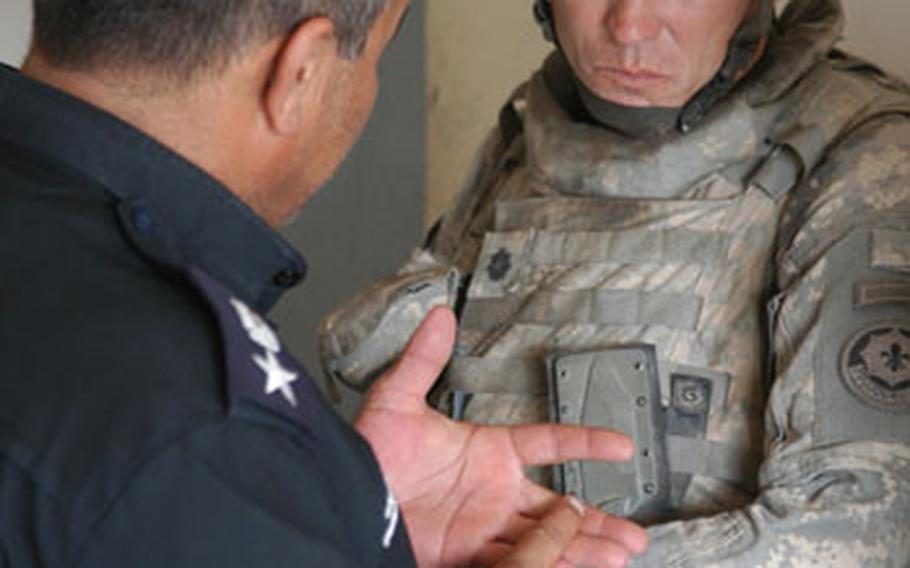 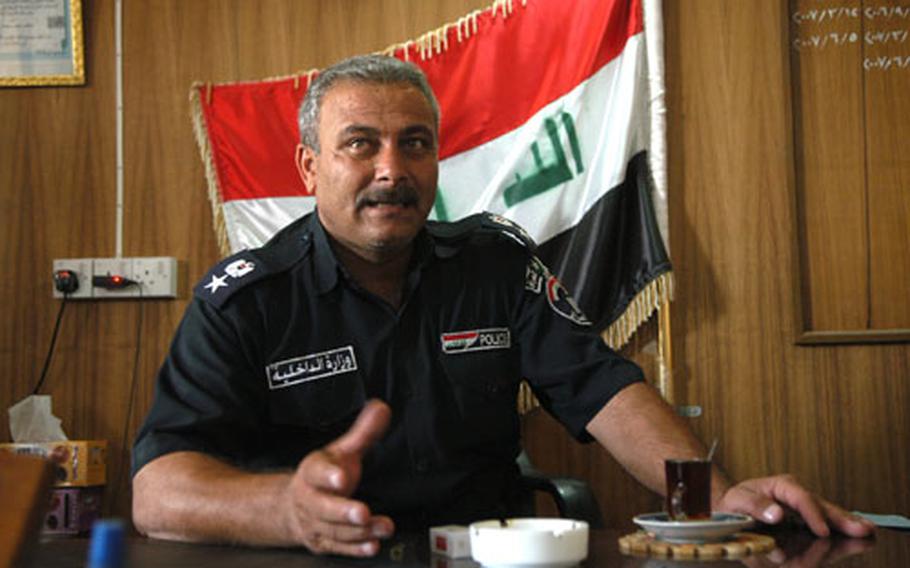 Iraqi Lt. Col. Ahmed Mohammad Khaleel, a Kurd and the police chief of Jalula, tells of Arabs in his sector who are alleged al-Qaida loyalists. (Photo by Sean Kimmons/S&S)

JALULA, Iraq &#8212; Zuher Kader al-Kerwii stood in front of the scarred, burned police gate surrounded by rubble &#8212; a reminder of the suicide bomber that rammed it last week with an explosive-laden car, killing 26 and wounding 49.

It must have been an eerie task for the policeman, who clutched his AK-47 rifle while scanning the horizon. He was standing on the same spot where his uncle and two friends were killed in the Aug. 26 attack. A crowd of police recruits for the town&#8217;s emergency response force had been waiting outside the building to pick up uniforms and weapons when the attack occurred.

"It was a huge explosion," al-Kerwii said Monday.

"I am not scared," he said of future attacks. "I will continue to fight and take revenge for the loss of my brothers."

This week, U.S. soldiers from the 3rd Squadron, 2nd Stryker Cavalry Regiment, headed to Jalula&#8217;s police station, near the emergency response force headquarters, to air theories of who they thought was behind the bombing. The incident, one of the worst attacks in Iraq in recent months, highlighted the complicated situation in northern Diyala province, where internal rivalries mix with Kurdish-Arab tension.

Some locals blamed disgruntled sheiks angry at how another local sheik handpicked Arab men from his tribe to be on the exclusive police force. The town&#8217;s police chief, Lt. Col. Ahmed Mohammad Khaleel, said the Sunni sheik swayed the unit&#8217;s commander to hire his men.

Khaleel went on to claim that the Sunni tribe had tried to put former al-Qaida fighters or sympathizers into the unit and gain control of the area&#8217;s checkpoints.

The next day, Maj. T.J. Siebold, the U.S. squadron&#8217;s operations officer, traveled to the headquarters to get Iraqis&#8217; take on the bombing. Some of the unit&#8217;s officers hinted that Kurds were behind it in some way.

"They said Kurds weren&#8217;t directly involved but may have facilitated in the car bomb," said Siebold, 40, of Nashville, Tenn.

The squadron&#8217;s commander, Lt. Col. Rod Coffey, has heard plenty of exaggerated Kurdish and Arab views in his sector lately.

"I don&#8217;t necessarily believe everything they say," he said. "A lot of people right now are making false accusations."

However, Coffey did tell Khaleel on Monday that he&#8217;d try to get U.S. intelligence teams to screen alleged al-Qaida loyalists in the emergency response unit, which calmed the Iraqi commander down a bit. The U.S. troops also promised to look into the exact source of the bombing.

A soap opera of sorts continues to unfold in northern Diyala province, where strife between Kurds and Arabs has been mounting. Iraq&#8217;s Shiite-led government recently sent Iraqi troops to push out the Kurdish "Peshmerga" militia from the province after they refused to leave.

Near Jalula, the Peshmerga militia still controls the town of Khanaqin, while Iraqi soldiers have it surrounded. Kurdish leaders and the Iraqi government are currently in talks to handle the standoff without bloodshed.

"What we need to concentrate on is that no one does anything stupid," Coffey told Khaleel and other Kurdish officials. "We should all stay on the same side fighting al-Qaida and leave it to politics."

Coffey describes his sector as "complicated."

In 2007, violence peaked between Shiites and Sunnis. And before that, Kurds who were displaced under Saddam Hussein&#8217;s Arabization efforts moved back into northern Diyala, forcing many Arabs to move elsewhere.

Peshmerga fighters then advanced south and held positions to rid al-Qaida elements from the region. Coffey believes some Arabs sought al-Qaida protection out of fear of the emerging Kurdish influence.

"They don&#8217;t want to be absorbed or controlled by the Kurds," Coffey said, adding that his unit is looking into other reasons why some Arabs have supported al-Qaida.

On top of this, some Kurdish leaders assume Prime Minister Nouri al-Maliki&#8217;s government is shoving Kurds out of the province for political reasons.

"Maliki hates the Kurds more than Saddam did," said a frustrated Khaleel.