Police: Don’t start the new year on Okinawa with a DUI arrest 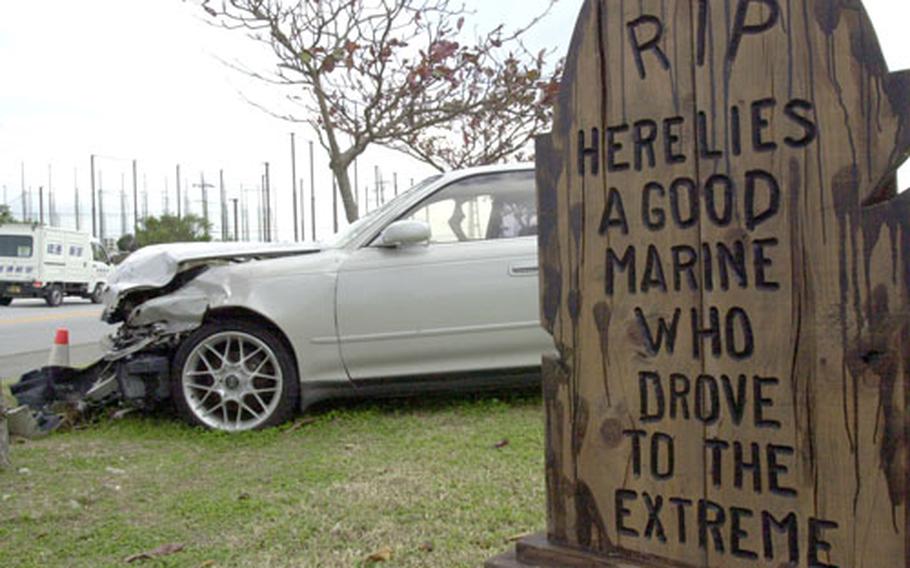 This wrecked car at the Camp Kinser Towers&#39; gate is one of the educational portions of the 3D campaign. (Cindy Fisher / S&S)

CAMP KINSER, Okinawa &#8212; If you drink and drive, we&#8217;re going to catch you. That&#8217;s the message local and military law enforcement agencies on Okinawa are putting out for New Year&#8217;s weekend.

The holiday season is a time when friends and family gather to celebrate, and alcohol is often a part of the festivities.

But, before you go out and party on New Year&#8217;s Eve, you need to have a plan for getting home, said military police officer 1st Lt. Tommy Olson, the special projects officer for the Marine Corps 3D campaign.

Preventing people from driving while impaired is a year-round effort but the Marine Corps&#8217; provost marshal&#8217;s office here is &#8220;focusing the majority of our efforts this month on this campaign,&#8221; which started Dec. 1, Olson said.

&#8220;We know that thousands of Americans every year continue to make the wrong choices&#8221; and drive while impaired by drugs or alcohol, he said. The 3D initiative, a campaign to discourage driving while drunk or drugged, was started by the National Highway Traffic Safety Administration and Mothers Against Drunk Driving.

According to the NHTSA there were 16,885 alcohol-related traffic fatalities in the United States in 2005, an average of one every 31 minutes.

And of Japan&#8217;s 47 prefectures, Okinawa has the highest per capita driving under the influence rate.

Through law enforcement and education programs, military and local police hope to curb the number of DUI incidents here.

Throughout December, Army, Air Force, Navy and Marine military police have held 3D blitzes with joint sobriety checkpoints, &#8220;and there will be more coming up before December is through,&#8221; Olson said.

Okinawa prefecture also is planning sobriety checkpoints, according to a prefectural spokesman at the police headquarters in Naha. From Dec. 21 until Jan. 4, checkpoints will be increased on major highways and entertainment districts throughout the island, the spokesman said.

&#8220;This year, particular emphasis will be placed on cracking [down on] driving under the influence of alcohol,&#8221; he said. &#8220;We will not announce exactly where or what time, but a massive number of checkpoints will be set up throughout the prefecture on the weekend.&#8221;

Through public service announcements and other programs, military and local police are getting the message out that driving while drunk or drugged will not be tolerated, he said.

More importantly, he said, since 3D was introduced to Okinawa in the early 2000s, &#8220;there has been a dramatic decrease in incidents during previous Decembers.&#8221;

Some options other than drinking and driving:

&#182;Choose a sober designated driver at the start of the evening.

&#182;Plan to spend the night where the activity is.