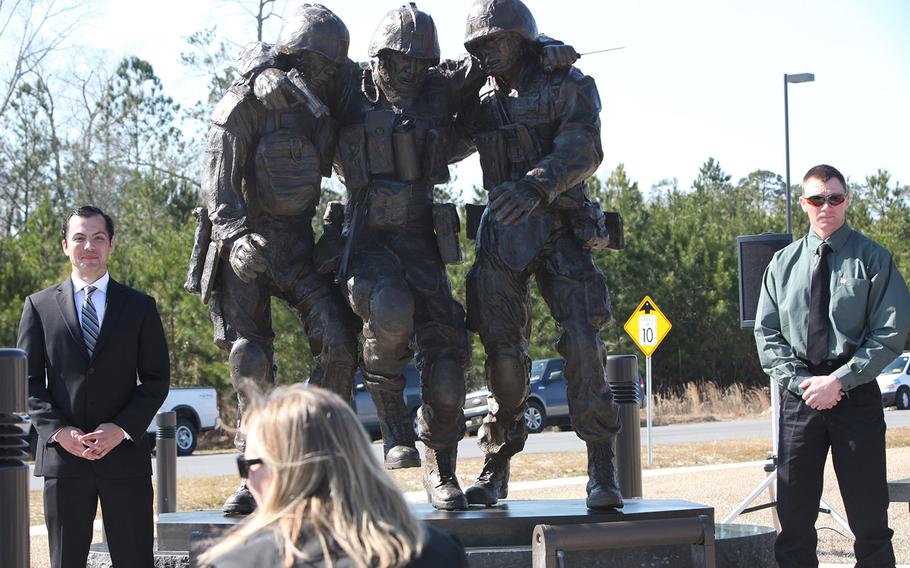 Sgt. Chris Marquez, left, and Cpl. Dane Shaffer, two of the three Marines the "Hell House" statue is based on, help unveil the new monument at the Warrior Hope and Care Center at Camp Lejeune, March 8, 2013. (U.S. Marines)

WASHINGTON — Police made two arrests Monday following the assault earlier this month of a decorated Marine outside a fast-food restaurant in Washington, D.C.

A third person was suspected in the Feb. 12 attack, which victim Christopher Marquez said was racially motivated. Police said the investigation is continuing.

“The kids were asking me if I think that black lives mattered,” Marquez told USA Today this month. “I was ignoring them, just because I felt intimidated. I felt how they approached me, it was very hostile. I felt they were really trying to intimidate me and just trying to start a confrontation with me.”

A surveillance video released by police last week shows a black male assailant in a white tank top punch Marquez in the head from behind as Marquez walked out of a McDonald’s on E Street across from FBI headquarters, according to police.

After being punched, Marquez fell to the ground where he was robbed by the female suspect and then kicked in the head, police said.

Marquez was one of three Marines in an iconic photo taken during the second battle of Fallujah. He was photographed carrying a fellow Marine whose uniform is blood-soaked from a wound during the so-called Hell House battle during which one Marine was killed and 10 were wounded.