Poles visit Aviano to get familiar with F-16s 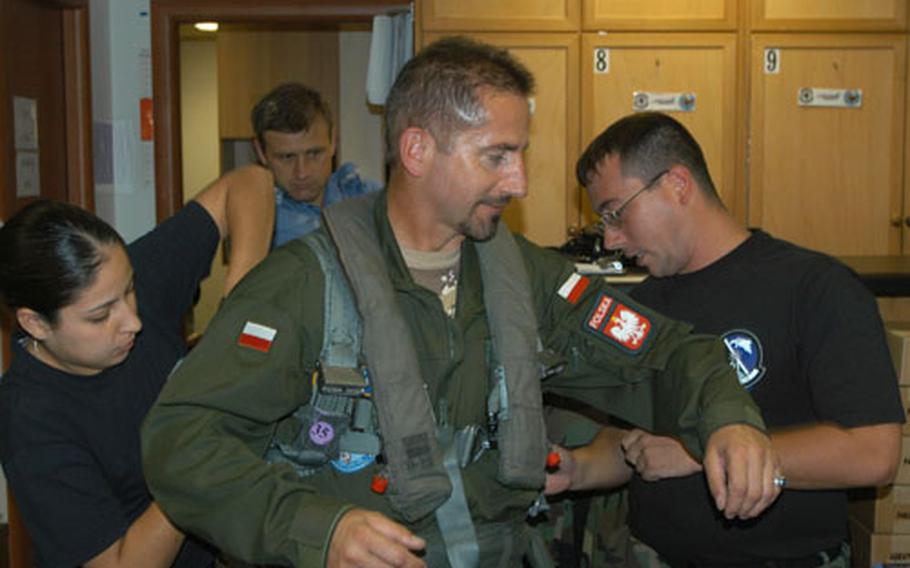 Airmen 1st Class Vanessa Hermosillo and Donald Morell adjust part of Polish air force Col. Wladyslaw Lesnikowski&#39;s flight suit Monday during the first day of a visit to Aviano Air Base, Italy. Aviano is showing more than a dozen officers from Poland, which is buying 48 F-16 jets, how the Air Force operates and maintains its fleet. (Kent Harris / S&S)

AVIANO AIR BASE, Italy &#8212; If all goes as scheduled, F-16s will be flying regularly in the skies over Poland in a few years.

Currently, though, one of the closest places members of the Polish air force can see the jets &#8212; and the personnel, material and systems that keep them airborne &#8212; is at Aviano.

It takes hundreds of Americans doing their jobs to get one of the aircraft off the ground. That&#8217;s the kind of effort the visitors are most interested in seeing.

He said the visit &#8212; one of dozens planned at various bases in Europe and the States &#8212; was more to show the Poles how the Air Force operates at a base that flies F-16s. It is service-to-service cooperation at its best, he said.

Most of those visiting this week are higher-level officers who will be spending more time putting together Polish programs and policies than piloting the planes.

Tadeusz Pieciukiewicz, a retired colonel now working in the country&#8217;s defense department, said the majority of pilots that Poland trains will be younger officers.

Col. Adam Swierkocz, who commands the Polish air base in Lask, has been on an F-16 before &#8212; thanks to the Danish air force. Asked to compare that ride to piloting the SU-22, he laughed.

While Lesnikowski and Swierkocz visited the 510th Fighter Squadron to be briefed on how the squadron is structured and functions, other members of the Polish delegation took a look at maintenance and operations.

A visit to the maintenance facilities at Aviano might be eye-opening for those used to a different system.

Capt. Phil Lancaster, a 510th pilot escorting one of the groups of Polish visitors, said a lot of the things the air forces do appear to be similar. But there are quite a few differences, too.