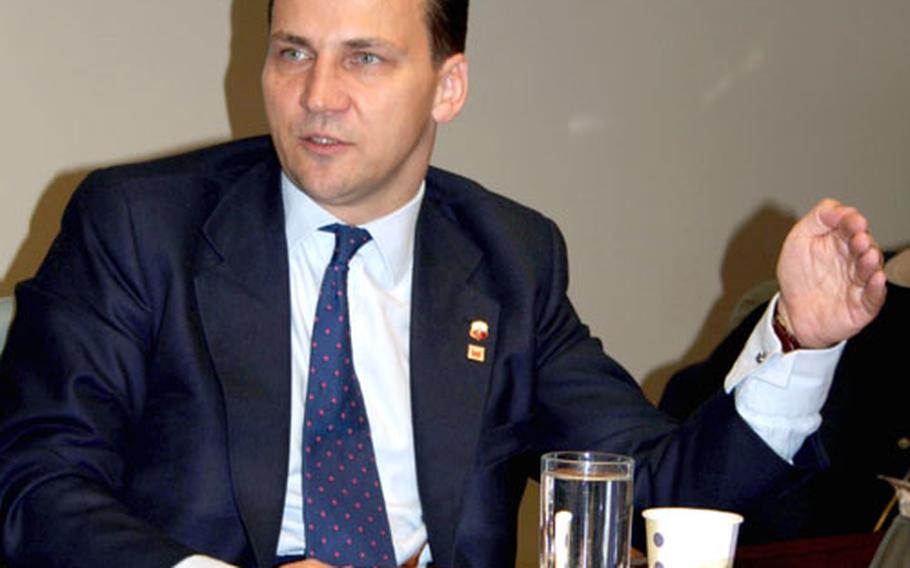 ARLINGTON, Va. &#8212; Worried about Russia and eager to cast its lot with the West, Poland continues to hope that the U.S. will establish bases and send troops there, according to the Polish defense minister.

&#8220;It would make economic sense, it would make strategic sense, and it would also help us contribute more to joint expeditionary operations,&#8221; Radoslaw Sikorski said in a Sept. 13 interview with Stars and Stripes in Washington.

When Pentagon officials unveiled their global repositioning plan in 2001, Poland was on the short list of sites to host forward operating sites, where U.S. troops can rotate in for regular training exercises.

The bases would also be available for logistics and as launching points for contingency operations.

But although Poland&#8217;s Defense Minister Jerzy Szmajdzinski announced in January 2004 that Poland had started negotiations with Washington on hosting U.S. military bases, negotiations are not currently active, Sikorski said.

A Pentagon spokesman, Navy Lt. Cmdr. Joe Carpenter, confirmed to Stripes on Sept. 14 that while the Defense Department &#8220;is constantly reviewing where we have forces postured around the world,&#8221; there are no negotiations under way to develop any U.S. base facilities in Poland.&#8221;

Sikorski said he does not understand why Washington has lost interest.

&#8220;We have some of the best exercise areas in Europe. We have people and a military that is friendly towards the United States,&#8221; Sikorski said. &#8220;We are somewhat surprised why some of our proposals have not been taken advantage of.&#8221;

Despite its prominence on the early lists, Poland has no U.S. facilities in the offing.

Carpenter said that when it comes to establishing bases in Europe, the Pentagon&#8217;s focus is on the southeast of Europe, where Romania and Bulgaria are located, &#8220;in order to maximize the flexibility and deployability of forces&#8221; in case of contingencies in the Middle East, for example.

But a U.S. defense official, who asked not to be identified because he was not given official permission to speak about what is a delicate diplomatic issue, told Stripes on Sept. 13 that the real reason Poland is getting cut out of the deal is simple: &#8220;Every time we turn around, they have their hand out.&#8221;

Despite generous contributions in military aid and extensive low-interest loans to buy military equipment, &#8220;they have continually requested more and more money,&#8221; the official said.