Pocket a license before hopping on a pocket bike 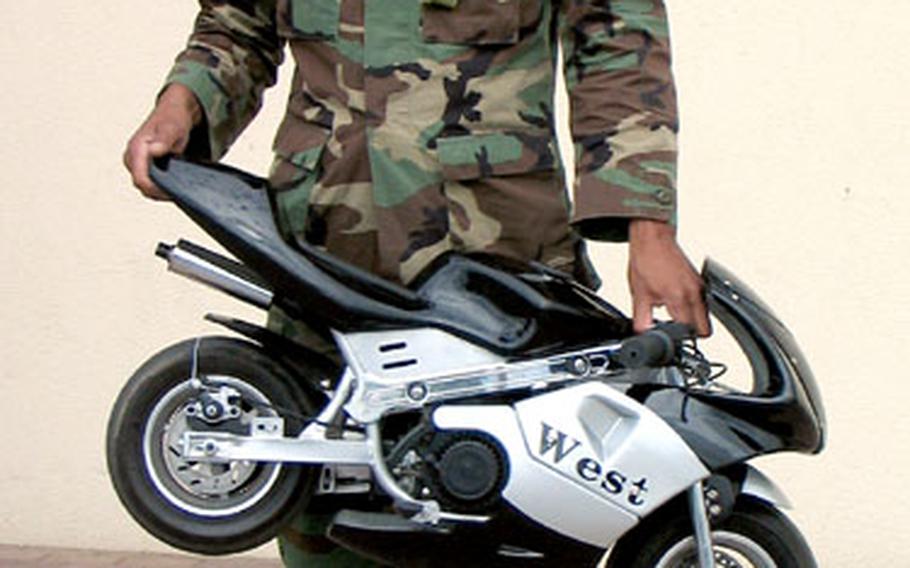 Don&#8217;t let their small size fool you: Mini-motorcycles known as pocket bikes require a motorcycle operator&#8217;s license and must be registered as a vehicle before they go on the road.

Pocket bikes, which stand about 2 feet tall, have been a hot item in some areas of the United States for the past few years and are growing in popularity in Europe. They are smaller, lighter and cheaper than their adult-size counterparts, with engines as small as 47 cc and price tags often in the $200-$600 range. According to news reports, they were designed for racing in closed areas or on private property and are illegal for street use in most states.

Although not available through Army and Air Force Exchange Service outlets in Europe, they can be purchased through European dealers or at numerous Web sites for about $400.

While the bikes appear almost toylike, the fact that they can travel up to 45 mph and are driven on the road in Europe mean they require a Class 1A motorcycle operator&#8217;s license, according to Tom Lorenzini, registrar for U.S. forces in Germany.

However, on military installations, their use is governed by Army Regulation 190-1, which also is used by the Navy and Air Force in Europe, U.S. European Command officials said.

The 279th Base Support Battalion&#8217;s Provost Marshall&#8217;s office in Bamberg recently sent out a reminder that anyone riding a pocket bike needs a license. A member of the office said this week that the first bike popped up on base a few months ago, but his office sees one almost every day.

Those without a motorcycle class license must either attend a course in the States or obtain a license through a German class before operating one on a U.S. installation in Europe, Lorenzini said.

They must also take the four-hour U.S. Army Europe motorcycle orientation course, and pass a written test and motorcycle proficiency course. The course must be taken every three years, and the class and tests are free.

To attend the courses and take the written test, drivers should contact their community driver&#8217;s testing station, Lorenzini said.

Under the Army regulation, riders also must carry insurance and adhere to the same safety guidelines as for motorcycles. They must wear a helmet, shatterproof eye protection, reflective clothing, full-fingered gloves, leather boots or over-the-ankle shoes, long-sleeved shirt or jacket and long pants, according to the regulation.

&#8220;Considering how small the bikes are, [45 mph] is very fast,&#8221; said Klaus Finster, a driver&#8217;s training and motorcycle orientation course instructor from the 280th Base Support Battalion in Schweinfurt, Germany.

Although the bikes are too new to have been incorporated into the course, Finster said operators should consider the size of the pocket bikes when taking them out on the road.

&#8220;Visibility is the main concern,&#8221; he said. &#8220;Regular-sized motorcycles are often hard to see by other drivers. Because these bikes are so small, they could be easily overlooked by other drivers on the road.&#8221;

Servicemembers, civilians and family members can check with their community driver&#8217;s testing station to find out where classes are held and which are offered in English, said Tom Lorenzini, registrar for U.S. forces in Germany.

Courses run about 15 hours and last four to five weeks, said Klaus Finster, a driver&#8217;s training and motorcycle orientation course instructor for the 280th Base Support Battalion in Schweinfurt, Germany.

The cost of the course is usually 1,000 to 1,200 euros. Motorcycles are provided for use in the course. Training and testing materials also are available in English, Finster said.