The Special Reaction Team stands guard in front of the Kubasaki High School gymnasium as a team member drops a phone for the hostage taker during Tuesday&#39;s practice exercise. (Fred Zimmerman / S&S)

The Special Reaction Team stands guard in front of the Kubasaki High School gymnasium as a team member drops a phone for the hostage taker during Tuesday&#39;s practice exercise. (Fred Zimmerman / S&S) 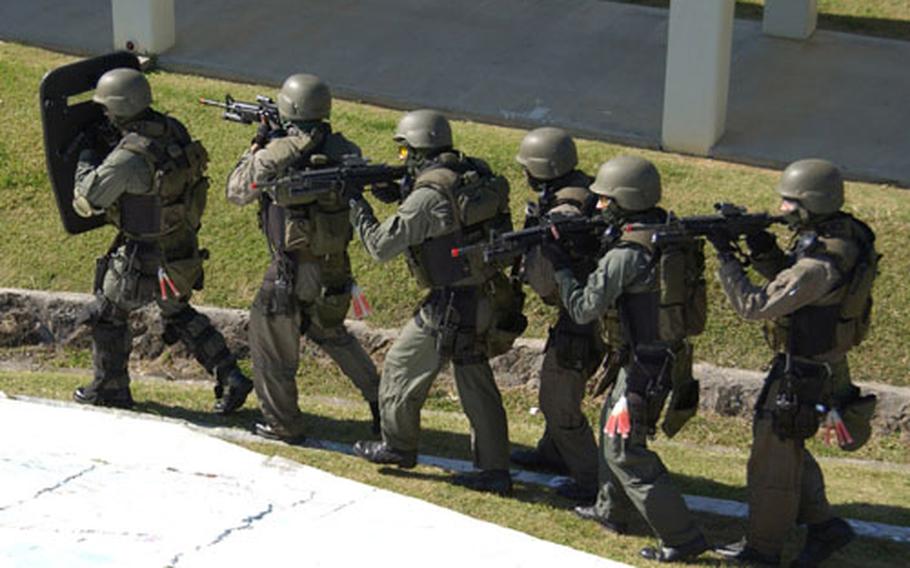 The Special Reaction Team moves toward the gymnasium in single file. During Tuesday&#39;s practice exercise, the team waited in a room outside the gym until they got the call to take out the suspect. (Courtesy of USMC)

The gunmen had taken approximately eight hostages and holed up in the gym, the teacher said.

While the call was the start of a training exercise, officials tried to make it as real as possible &#8212; only exercise evaluators knew about the surprise call, exercise coordinator Chief Warrant Officer Tony Mathis said.

Units were dispatched to the area, and first responders set up two perimeters: one to keep people out and one to keep everyone in.

The Special Reaction Team was recalled and Criminal Investigation Division officials were notified, K-9 units were alerted and emergency medical personnel brought in.

Responders were thrown a few curves during the exercise: One of the hostage-takers &#8220;accidentally&#8221; shot himself in the leg, and when they pulled the assailant away they found a woman, rather than a man.

Shortly after arriving at the school, Marines realized they had closed-circuit television in the building and were able to watch the remaining hostage-taker&#8217;s moves.

Team members gathered in a room outside the gym waiting for the call to enter.

After the second suspect disappeared into a side room and hostages were left in the gym, the team entered and split into two groups &#8212; one gathered hostages and the other went after the suspect.

Officials called the drill a success &#8212; no hostages had been injured.

Mathis said the training was designed to polish response skills.

Response team members said they learned from the experience.

&#8220;It provided us with a lot of lessons learned, which is what we need before we can go out and do this for real,&#8221; said 1st Lt. Marcus Young, Special Enforcement Section officer-in-charge.

Group training sharpens Marines&#8217; skills and teaches Marines to be flexible, he said, teams train at least four days a week and are able to respond fully equipped anywhere on the island within two hours of a call, he added.

Investigators said they had one goal in situations like the drill.

Provost operations officer Capt. Bernard Hess said the drill was the first time in a year the various units trained together. He hopes future training will be quarterly.