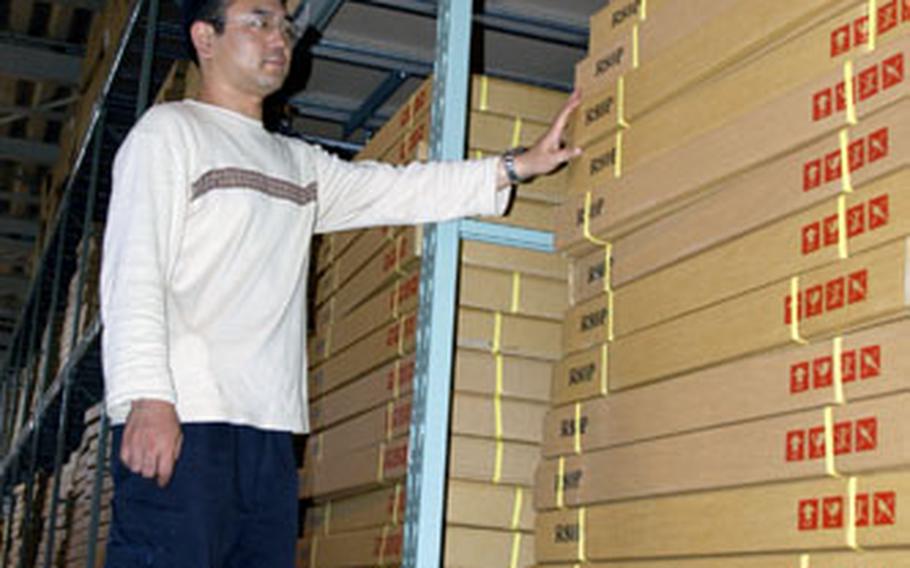 Masato Shimamura, Furnishings Management Office repair shop and warehouse section supervisor at Misawa Air Base, Japan, stands by stacks of satellite dishes, unused and still in their boxes. The base has just over 1,000 satellite dishes and about 700 decoders available. (Jennifer H. Svan / S&S)

Her office began issuing the free equipment in December as part of a $3.2 million U.S. Forces Japan initiative to deliver critical force-protection and command information to more than 10,000 households in mainland Japan and Okinawa.

The program &#8212; for active-duty military and Defense Department civilians &#8212; saves off-base residents about $300 in annual equipment leasing fees through base exchanges, where satellite dishes retailed for an additional $115.

But still sitting in the Furnishings Management Office (FMO) warehouse at Misawa are about 700 decoders &#8212; out of the original 1,400 &#8212; and just more than 1,000 satellite dishes, Smith said recently. The base received more satellite dishes than decoders.

Other bases in Japan likewise are finding it difficult to move out their free stuff. Yokosuka Naval Base has issued about one-third of its assets, said Scott Tupper, the Navy&#8217;s &#8220;Direct-to-Home&#8221; program manager for Yokosuka, Naval Air Facility Atsugi and Sasebo Naval Base. Atsugi is at about 50 percent and Sasebo is at 60 percent, he said.

And some people just can&#8217;t access the American Forces Radio and Television Service&#8217;s satellite signal from their home.

But the numbers still indicate, Tupper said, that some people &#8220;are using the system to their advantage and enjoying the product. I think you&#8217;ll see some improvement as time goes by. This has only been running for six, seven months now.&#8221;

At Yokota Air Base near Tokyo, about half of the base&#8217;s 580 decoders and satellite dishes are signed out, according to Steven Cole, FMO supervisor supply technician. Housing officials at Camp Zama said of the 135 sets they received, 43 have been signed out. Officials at Kadena Air Base could not provide Okinawa&#8217;s numbers by deadline.

In a written statement, Maj. Richelle Dowdell, a USFJ spokeswoman, said: &#8220;The Direct-to-Home Satellite decoder program is working very well for our U.S. Forces, Japan members who are living in off-base residences throughout Japan. USFJ will continue to provide information about the availability of DTH through command channels, such as Commanders&#8217; Access Channels, base newspapers, AFN and Commander&#8217;s Calls as well as new arrivals programs such as &#8216;Right Start.&#8217;&#8221;

But it may take more than informing newcomers to get people interested in the &#8220;free&#8221; product.

At Sasebo, where DTH program manager Sheryll Hunt is pleased with results to date, commercial installers charge $75 for set-up, and a cable and connector costs $25 extra.

From customers who choose self-installation: &#8220;We have few complaints but we&#8217;re able to help them (in) determining the exact problem and finding the solution,&#8221; Hunt said in an e-mail.

Tupper said bases could opt to use some of the one-time funding from USFJ for a service contract &#8212; but that did not include someone to actually do the installation.

&#8220;The intent of that was to provide a minor help desk operation that would issue out decoders, hardware and be able to give minor information on how to set up the decoder box,&#8221; he said.

Smith hopes to be able to fund installation in the future: &#8220;We believe more people would be more receptive to getting the dish if we provided the service,&#8221; she said.

In the meantime, Misawa&#8217;s FMO is assisting customers as much as possible with self-installation, Smith said. Masato Shimamura, FMO repair shop and warehouse section supervisor, created a troubleshooting guide, acquired a self-installation video clip from one of the manufacturers and created a list of items that customers need to purchase locally &#8212; about $80 worth of hardware.

Tupper expects to see more decoders and dishes move out the door as Yokosuka continues to push to get more ship-based sailors ashore into barracks and into off-base quarters.