Platoon of Marines moved to Uganda amid South Sudan crisis 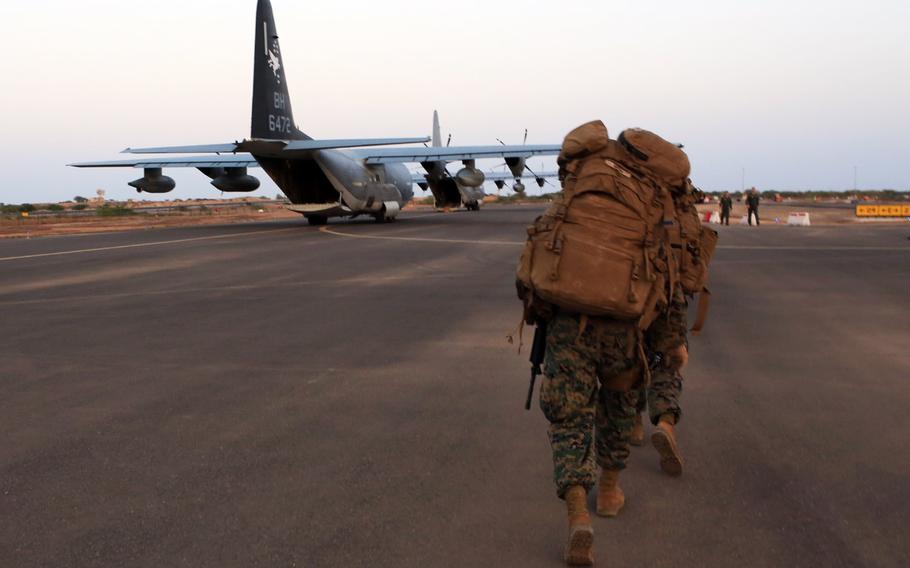 WASHINGTON — A platoon of U.S. Marines was moved from Djibouti to Uganda on Tuesday in the event the fighting in neighboring South Sudan deteriorates further.

“This forward posturing provides the Combatant Commander additional options and the ability to more quickly respond, if required, to help protect U.S. personnel and facilities,” U.S. Africa Command said in a statement.

AFRICOM said this contingent of some 40 Marines and a KC-130J aircraft are now in Entebbe, the capital of Uganda.

The KC-130J transport plane has airborne assault capabilities, and is also used for medevac, search and rescue, and aerial refueling.

“These movements were made with the full knowledge and cooperation of the Ugandan authorities,” AFRICOM said.

A Special-Purpose Marine Air-Ground Task Force Crisis Response unit was moved Monday from Moron, Spain, to Camp Lemonnier, Djibouti, after an incident in which four Navy SEALs were wounded during an aborted rescue operation in South Sudan. The SEALs were trying to evacuate American citizens from the city of Bor on Saturday when the Osprey aircraft they were flying in came under small arms fire while they were trying to land.

Three of the SEALs were transported to Landstuhl earlier in the week; the fourth was stabilized at a hospital in Nairobi, Kenya, and was moved to Landstuhl on Christmas day.

The MAGTF is a crisis response unit that was stood up earlier this year in the wake of the Sept. 11, 2012, attack on the U.S. consulate in Benghazi, Libya, in which four Americans were killed, including U.S. Ambassador Christopher Stevens. The Obama administration and senior military leaders were heavily criticized by Republicans for not launching a rescue operation more quickly.

The deployment to Djibouti is the largest operational mission that the MAGTF has undertaken since its inception. The contingent sent to Camp Lemonnier consists of 150 Marines and a complement of Osprey and KC-130 transport aircraft.

The violence in South Sudan reached crisis level Dec. 18 when the U.S. Air Force evacuated 120 U.S. and foreign diplomats and other American citizens from Juba, the capital of the young nation of South Sudan, at the request of the State Department as fighting among local factions intensified. Subsequent evacuations have since been conducted.

On Dec. 18, AFRICOM also deployed 45 U.S. soldiers to protect American citizens and beef up security at the U.S. Embassy in Juba. The soldiers were part of the East Africa Response Force, which is based at Camp Lemonnier. The EARF was created following the Benghazi attack. It is positioned in Djibouti to enable the U.S. military to respond to crises when requested by the State Department.

On Monday, a senior administration official suggested that more evacuation operations will need to be mounted.

“Based on registration [with the Embassy in Juba], there are American citizens in other towns and areas throughout South Sudan,” the official told reporters on condition of anonymity during a conference call to discuss the volatile situation in the area. “If indeed there is a need, I’m sure that we will do our best to help Americans get out of South Sudan, and we will continue that effort.”

The movement of Marines to Uganda is part of preparations to conduct potential evacuation and diplomatic facility-protection missions.

“The combatant commander is repositioning forces in the region in an effort to give himself the maximum flexibility to respond to any follow-on requests from the Department of State,” Defense Department spokesman Col. Steve Warren said Monday.