Platoon finds major weapons stash, including C-4, near base in Iraq 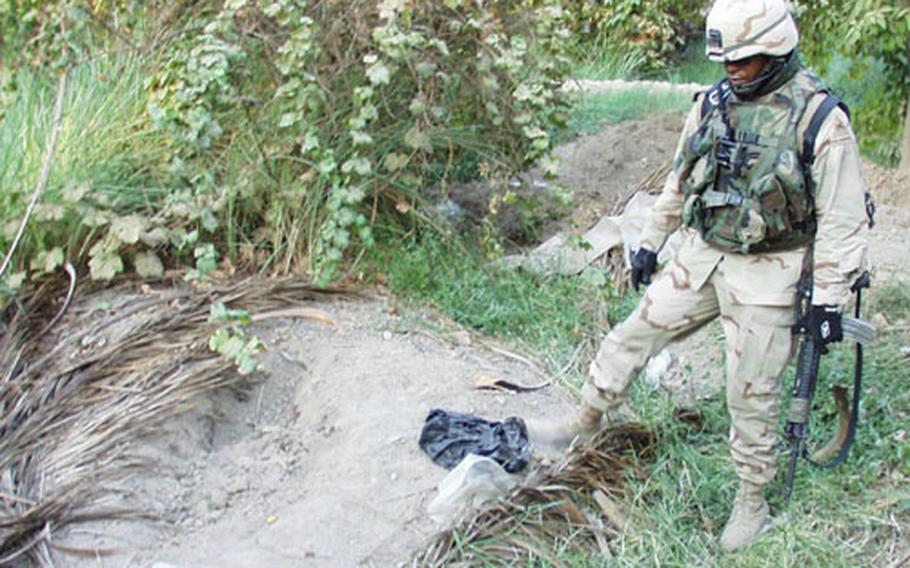 Hunter platoon leader 1st Lt. Mallory Chambers shows one of the spots in the palm grove where the weapons were dug out. (Lisa Burgess / S&S)

Hunter platoon leader 1st Lt. Mallory Chambers shows one of the spots in the palm grove where the weapons were dug out. (Lisa Burgess / S&S) 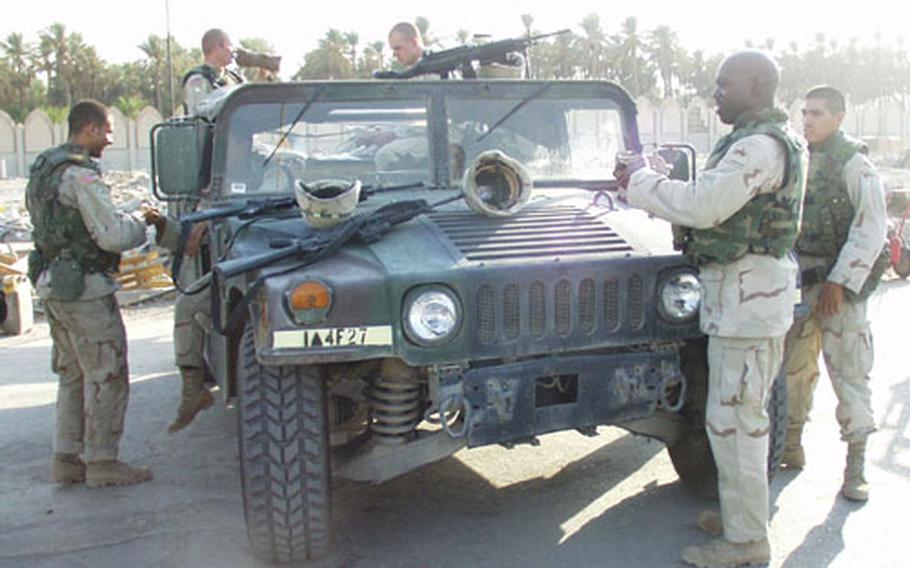 Hunter platoon soldiers saddle up for another mission. They are right next to their living "hooch." In the background is the wall that abuts the palm grove where the weapons were found. (Lisa Burgess / S&S) 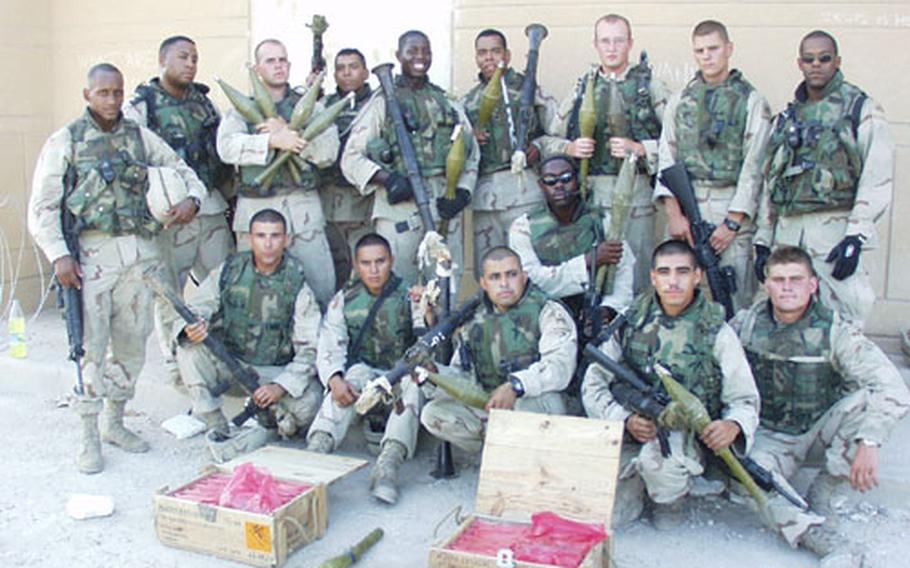 BAGHDAD, Iraq &#8212; U.S. teams all over Iraq are turning up arms caches, but rarely does a unit find a huge stash of dangerous weapons so close to home that the devices could have killed them and their buddies as they slept in their cots.

But that&#8217;s exactly what the &#8220;Hunter&#8221; platoon did Thursday. Acting on a tip from an informer, the platoon found a major weapons stash right outside its perimeter.

Col. Rob Baker, commander of the 2nd Brigade of the 1st Armored Division, said Friday that the Hunters found 123 pounds of C-4 explosive, 47 rocket-propelled grenades, seven grenade launchers, 3,000 rounds of 7.62 mm ammunition, machine guns, AK-47s and 20 pounds of gunpowder &#8212; all neatly wrapped and recently stored in holes dug in a palm grove outside one of Baker&#8217;s forward operating bases.

Thousands of arms caches are in Iraq, so many that soldiers say &#8220;the entire country is one big armory.&#8221;

In Baghdad alone, at least 145 major weapons stashes are left to be emptied by the U.S. military, down from 900 that were known to exist when the U.S. military first came into Iraq, according to Brig. Gen. Martin E. Dempsey, commander of the 1st Armored Division.

But while soldiers may discover weapons on almost a daily basis, the Hunters&#8217; find was special for three reasons: the size of the cache; the inclusion of C-4, which is an exceptionally dangerous and potentially unstable explosive; and the proximity of the stash to a U.S. forward operating base, Applegarth said.

Although 1st Battalion searches several times a week for arms, &#8220;this is the largest cache the battalion has found since they got to Baghdad,&#8221; Applegarth said. &#8220;People are talking about this one.&#8221;

The Hunters live at Forward Operating Base Thunder, in a rough neighborhood in southeast Baghdad, encircled by a high wall marked by guard towers. Local Iraqis say the facility was once a warehouse for Saddam Hussein, who stored grain and other goods bought under the oil-for-food program. Whatever the base once was, today it is largely a parking lot for American military equipment.

Sprinkled among the neatly parked vehicles are the tents where the soldiers live. The Hunters live rough, bunking down in hot, cramped tents. The tents are especially close to the periphery &#8212; between 82 feet and 110 feet from the wall that is the only separation between U.S. personnel and local Iraqi homes and apartments. Soldiers said they fall asleep to a nightly symphony of gunfire &#8212; celebratory and the more ominous kind.

Late Wednesday evening, Hunter platoon leader Lt. Mallory Chambers and his platoon sergeant, Staff Sgt. Bruce Hutcherson, got the word from military intelligence that a small arms cache may have been buried in a palm grove that abuts the Thunder base&#8217;s outer wall.

The same wall is visible right across the littered and bare lot that separates the Hunters&#8217; tents from the outside world.

In general, the vicinity around Thunder base has been the site of several recent attacks with grenades or other improvised explosive devices, which have caused little damage but keep the soldiers on their toes, the Hunters said.

The site where the arms were thought to be stashed was in the general vicinity of those attacks, so Chambers figured it might yield &#8220;maybe a few AK-47s or hand grenades &#8212; we definitely were not expecting that much.&#8221;

The palm grove proved to be a tactically scary place.

Dense, green, waist-high vegetation and single-canopy cover from the tall palms are more reminiscent of Southwest Asia than the Middle East. Only one gate leads in and out of the field, and once inside, there is barely room on rutted dirt tracks for a Humvee to pass &#8212; and no way to quickly turn a platoon around if danger should strike.

The Hunters dismounted, spread out and began to comb through the rotting ground cover for signs of the cache. Some of the soldiers used handheld metal detectors, others, their powers of observation.

The Hunters spent an hour and a half searching in the growing heat, Hutcherson said.

Then, about 10:30, Sgt. Julio Tamayo suddenly noticed something suspicious.

Tamayo immediately called over his battle buddy, who had a metal detector.

Sure enough, about two feet under the ground, the soldiers hit pay dirt: RPG rounds, carefully wrapped in plastic.

A thorough search of the immediate area yielded the entire cache.

As they dug, the Hunters said, they were fully aware that they were just yards away from their living quarters.

But the Hunters were not the only soldiers who could have been in danger from the cache.