Plans to move tankers, special operations wing from Mildenhall to Germany are put on hold 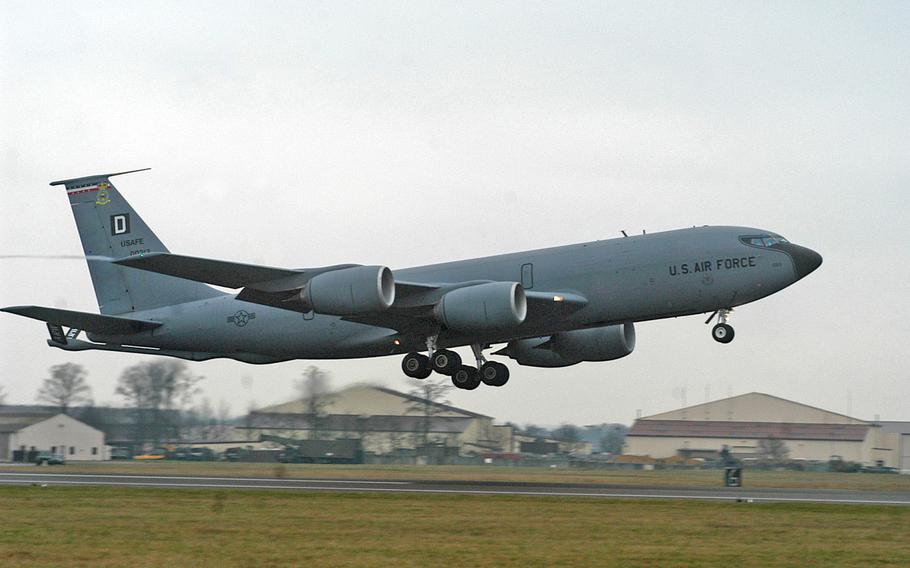 A KC-135 Stratotanker from the 100th Air Refueling Wing takes off from RAF Mildenhall, England. The Pentagon has put the closure of Mildenhall and the relocation to Germany of refueling tankers and a special operations wing on hold while U.S. European Command reassesses the 2015 European Consolidation Initiative. Stars and Stripes (Stars and Stripes)

KAISERSLAUTERN, Germany – Plans to close RAF Mildenhall in England and move its refueling tankers and a special operations wing to Germany have been put on hold, the Pentagon said this week.

The “action to divest RAF Mildenhall is on pause until U.S. European Command completes a reassessment of the previous closure decision and the U.S. Department of Defense makes a decision on the future of the installation,” a Pentagon official with knowledge of the matter said in a statement Monday.

The official, who provided a written statement on background to Stars and Stripes, did not say why the move to shutter Mildenhall was being reevaluated.

The closure of the base, located about 80 miles north of London, was first mooted in 2015 by the Pentagon under a cost-saving plan to consolidate installations in Britain and Germany.

Mildenhall’s aerial refueling mission and some 750 military personnel were slated to move to Ramstein Air Base, while the 352nd Special Operations Wing, including CV-22 Ospreys, was to go to Spangdahlem.

Fourteen other sites in Europe were also set to be shut down under the plan, called the European Consolidation Initiative.

The moves from Mildenhall to Germany are on hold while U.S. experts evaluate the consolidation program in light of current U.S. security and defense policies, Germany’s Federal Construction Office said in a statement last week.

Work related to the planned relocations has been “interrupted until further notice,” the construction office said.

Local German politicians expressed disappointment over the delay. In an article in the Pfaelzischer Merkur newspaper, Nico Steinbach, a Social Democrat in the Rheinpfalz parliament, described it Monday as a “bitter setback” and the mayor of Wittlich, Dennis Junk, said it would “weaken” the region.

Funding for design and construction projects to support personnel and aircraft expected to move from England to Germany in the coming years was included in contracts worth $425 million that were awarded by the Air Force in January to half a dozen U.S. and German companies.