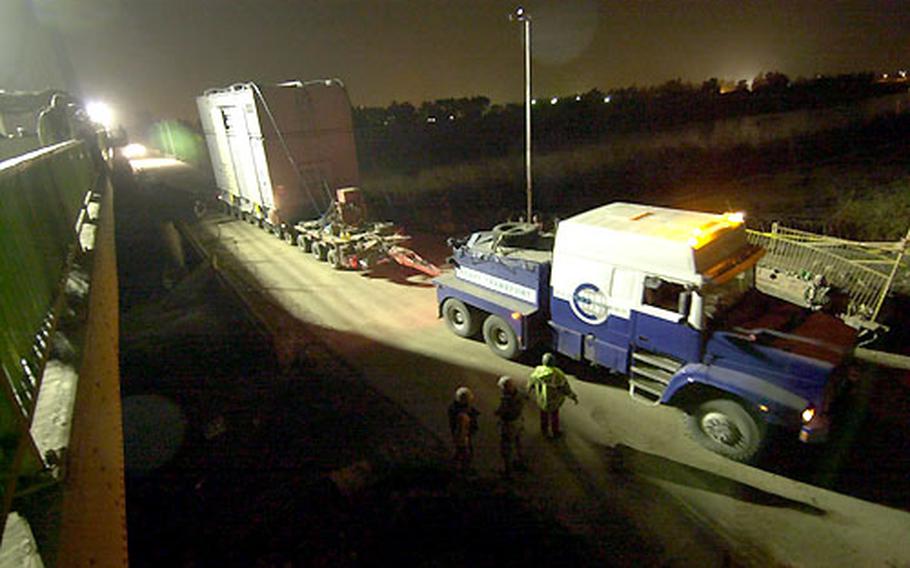 U.S. Army Corps of Engineers move a 300-ton generator across the Tigris River on Monday night in Baghdad. When brought online, the generator will increase the city’s power output by about 30 minutes daily. (Jim Schulz / S&S)

U.S. Army Corps of Engineers move a 300-ton generator across the Tigris River on Monday night in Baghdad. When brought online, the generator will increase the city’s power output by about 30 minutes daily. (Jim Schulz / S&S) 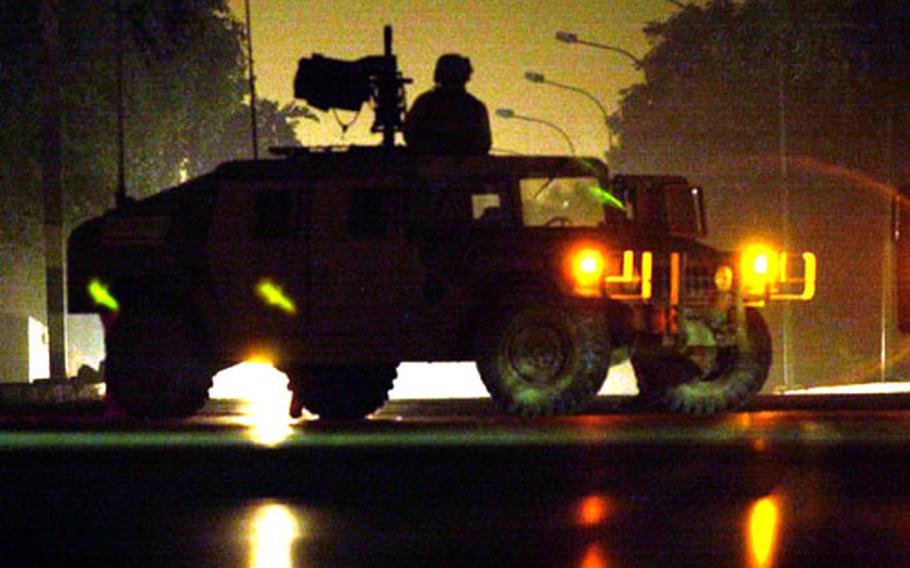 A soldier from the Alabama national Guard’s 1165th Military Police Company stands watch in a Humvee as the Army Corps of Engineers moves a 300-ton generator through Baghdad. (Jim Schulz / S&S)

The $30 million generator will produce about 157 megawatts of power, enough to add 30 minutes of power each day to the whole city, said Brig. Gen. Steve Hawkins, who heads the Restore Iraqi Electricity program.

Most Iraqis in Baghdad each day have about 12 hours of power coming and going in three-hour cycles. Essential services, such as police stations and hospitals, are given continual power.

With some generators down for maintenance, the city currently draws about 4,000 megawatts. But by June, engineers hope to have 6,000 megawatts to power Baghdad, increasing electricity to 16 hours per day.

Moving the generator is part of a $1 billion plan to beef up Iraq&#8217;s electricity, said Col. Todd Semonite, deputy commander of the Iraqi electricity program.

When it&#8217;s up and running, the new generator will support a ring of electrical infrastructure surrounding Baghdad, Semonite said. Built in France, the mammoth generator was bought for Iraq under the U.N. Oil For Food program. Army engineers found it in a neighboring Arab country, which Army officials asked not be named for security reasons.

Soldiers provided security along each leg of the route, which included passing through insurgent hot spots such as Ramadi and Fallujah.

Each leg of the trek was carefully orchestrated, but navigating tight city streets and providing security from attack was challenging for the troops. Squads of soldiers, assisted by Iraqi police, blocked off the route. Helicopters buzzed overhead as the growling tractor-trailers snorted their way through Baghdad&#8217;s thoroughfares.

About 10:45 p.m. Monday, insurgents launched a rocket attack at the Coalition Provisional Authority Headquarters inside the protected Green Zone. The loud bang was heard across the city, but the generator lumbered on, heading toward a power plant on the city&#8217;s outskirts.

And it appears to have arrived when Iraqis need it most.

As the entourage weaved through the city&#8217;s east side, the power went out.